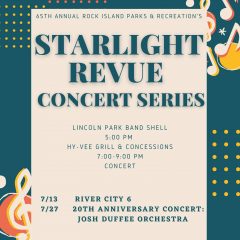 Join the Josh Duffee Orchestra TONIGHT at Lincoln Park in Rock Island for a 20th Anniversary Performance at 7:00pm! The bandshell is located at the intersection of 11th Avenue and 42nd Street. “We were unfortunately rained out in June, but tomorrow is looking much better than last month,” Duffee said. “Make sure you bring a lawn chair, and Hy-Vee will have food and beverages for sale at 5:00pm. “We’ll be performing the music of Gene Krupa and His Orchestra from our very first show 20 years ago, so come on out and hear some incredible music! “Please... Read More 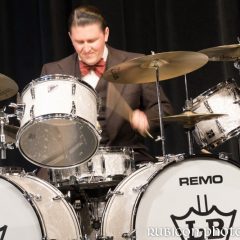 Josh Duffee Orchestra has rescheduled a special 20th-anniversary concert salute to Gene Krupa (since it was rained out June 29), to the same location — Lincoln Park in Rock Island, at 7 p.m. Tuesday, July 27th. On June 30, 2001, the Josh Duffee Orchestra performed a Krupa tribute at the then-Moline Community Center on 5th Avenue, less than two blocks away from where Bellson’s family operated a music store at 1711 5th Ave. Then a 21-year-old Moline High graduate, Duffee intimately knew his way around a drum kit and worshipped both Gene Krupa (1909-1973) and Louie Bellson (1924-2009) –... Read More 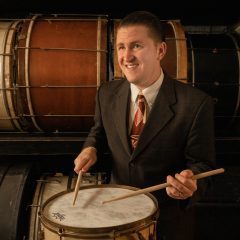 Saturday in the Arts is a weekly feature covering a trend, subject, event or personality of local interest. It runs every Saturday morning on your site for the best entertainment and arts coverage in the area, QuadCities.com! Over 20 years ago, Josh Duffee had an inspired idea – form a big band and play the music made famous by the jazz drummer who launched the career of a world-famous Moline drummer. Then a 21-year-old Moline High graduate, Duffee intimately knew his way around a drum kit and worshipped both Gene Krupa (1909-1973) and Louie Bellson (1924-2009) – the latter a Moline alum who... Read More 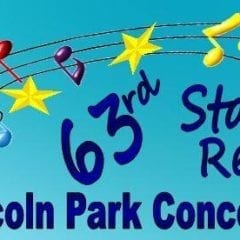 Where can you get good food, dance lessons and great local live music? The Starlight Revue Concerts, that’s where! The 63rd Annual Starlight Revue Concert Series will kick off this Tuesday Jun 4 and will continue every Tuesday night through Jul 30 (with Aug 6 as a rain date). This free concert series takes place at Lincoln Park in Rock Island (38th Street). Hy-Vee will be serving up dinner on the grill, beginning at 5 p.m. At 6:30 p.m. QC SoDa dance lessons will be provided, for those who want to learn some new moves or rejuvenate their former mojo. The concerts will proceed from 7 – 9 p.m. Check... Read More