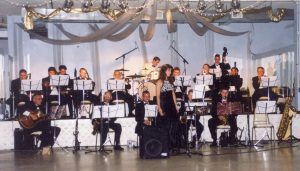 A view of the Josh Duffee Orchestra performing June 30, 2001 at the Moline Community Center.

Josh Duffee Orchestra has rescheduled a special 20th-anniversary concert salute to Gene Krupa (since it was rained out June 29), to the same location — Lincoln Park in Rock Island, at 7 p.m. Tuesday, July 27th.

On June 30, 2001, the Josh Duffee Orchestra performed a Krupa tribute at the then-Moline Community Center on 5th Avenue, less than two blocks away from where Bellson’s family operated a music store at 1711 5th Ave. Then a 21-year-old Moline High graduate, Duffee intimately knew his way around a drum kit and worshipped both Gene Krupa (1909-1973) and Louie Bellson (1924-2009) – the latter a Moline alum who in 1941, at 17, won the Gene Krupa National Slingerland Drum Contest in New York City, out of whopping 40,000 drummers.