Home › Columns › Sean Leary › Will The Time Traveler From 2485 Be Right? Will Aliens Invade Earth Tuesday?

Will The Time Traveler From 2485 Be Right? Will Aliens Invade Earth Tuesday?

Well, there’s still time to stock up on toilet paper.

As previously reported on QuadCities.com, your local news source for breaking news about time travelers on TikTok and alien invasions, our old friend the time traveler from 2485, as well as a couple of other time travelers (do they call each other and coordinate this stuff?) have predicted the earth will be invaded by aliens this week.

When will this event occur?

Don’t worry, it won’t interrupt your Labor Day barbecue and celebration. Those considerate aliens are going to let us have our holiday before completely rocking our world and invading on Tuesday.

Now, unlike many alien invasions, you won’t have to worry about this one.

According to the time travelers, the aliens hitting us up this week are actually here to save us from OTHER aliens who are still a good 100 years away. Why are they getting here so soon? Because it takes 15 years to get from their planet to ours and back, so it’ll take a good three trips to get humans off world before the bad aliens show up, at which point they’ll be like, “Hey, where’s everybody at? We were going to invade this place and cause general turmoil and there’s nobody around!”

And then another alien will say, “Wait, sir, we’ve got some life readings emanating from just over that hill!”

Then they’ll all march over the hill and there they’ll find a tavern, occupied by several million cockroaches, and Keith Richards.

And the aliens will reply, “Gurl, you so crazy!”

Then they’ll all laugh, and we’ll fade to credits as a wacky song plays and slides of alien hijinks with Keith and the roaches slip by in the background.

Anyway, here are the details, because I know you’ve been anxiously awaiting the lowdown on this event: 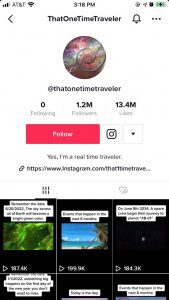 You can trust they’re a real time traveler, because they said they are. I mean, people, time travelers don’t lie.

According to one TikTok time traveler, and his alien compatriots, NEXT TUESDAY, Sept. 9, an alien that landed here on June 14 (but has been going incognito since then, probably checking out state fairs and entering corn dog-eating competitions) is going to announce their presence and tell earthlings that they are in grave danger — and will begin evacuating people 4,000 at a time.

The GOOD alien is going to be taking 4,000 skilled workers and children to a nearby habitable planet called Proxima B. It takes 15 years to get there, so make sure you go to the bathroom beforehand, because they are not stopping. Then, the alien will return every 30 years, presumably with more ships and aliens, because otherwise it’s going to get really crowded, and that will, to quote the time traveler, “save humanity.”

ANOTHER Time Traveler from the year 2714 is backing up PART of this story! Sort of. The Time Traveler is claiming that part of the story, the alien invasion part, is ACTUALLY, REALLY going to happen this week, NOT 100 years from now.

Anyway, according to our friend the Time Traveler from 2714, the alien invasion all has to do with the meteor shower that took place in July.

To astronomers and amateur star-gazers, it looked just like the Perseid meteor shower, but it was actually a smokescreen (probably the kind that Shaggy causes) and that many of the so-called meteors are actually spacecraft of an extra-dimensional alien race called the Nirons, who are going to invade earth and wage interdimensional war with us.

What time traveler should we believe?

Either way, I’m getting tacos on Monday instead, just in case.