There’s been a long history of people claiming to be time travelers.

And there’s been an even longer history of people just being full of crap.

One of the most infamous of these among the bologna category was John Titor. 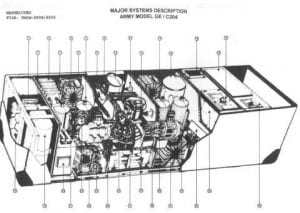 I bring up Titor, because there’s another time traveler who’s been gaining a lot of attention lately in the world of TikTok, where there are several people claiming to be from the future, coming back to warn us about various awful things on the horizon, as if 2020 wasn’t bad enough already.

This guy goes by the handle thatonetimetraveler, and claims to be from the year 2485, coming back to warn us of various events about to happen over the next few years.

In all likelihood, this guy is either yanking people’s chains or doing a masterful job of jerking them along so that he can promote a movie, book, video game or something else tied in to the whole time travel thing and the world he’s spinning for them.

And, fair enough for him. I don’t really care, he’s not harming anyone, other than anyone stupid enough to really take him seriously, and at the very least he’s entertaining.

That said, let’s take a look at a few of the things he says are going to happen over the next four years, which he’s revealing to us as Imagine Dragons plays in the background, which is both hilarious and appropriate: 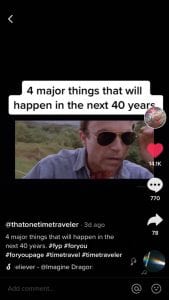 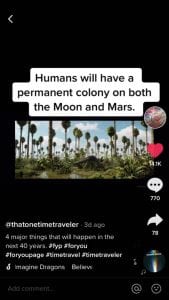 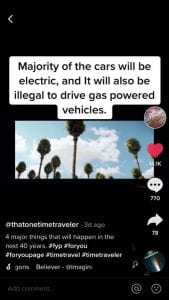 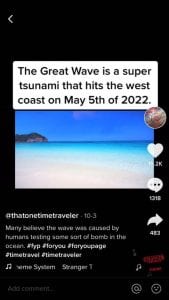 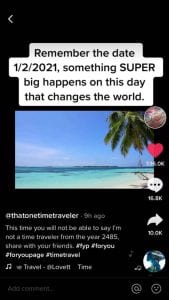 So, what do you think? Complete and total crapola? Partial crapola? Interesting or imaginative crapola?

I guess we’ll find out. And soon. The guy says Trump is going to win the November election (although let’s face it, he’s got a 50/50 shot on that one; it’s like picking the Super Bowl winner once you know the two teams that are playing) and he says some MAJOR thing is going to happen on Jan. 2, 2021. My guess is that it’s the release of his book or movie or video game or whatever that he’s promoting with this. Of course, if Trump loses everyone will think he’s totally bogus, unless he comes up with some explanation of an alternate timeline or something.

I’ll look forward to seeing that video, and as a time traveler myself, albeit one who only travels to the future one second at a time, I’m going to predict that the music he has playing during his explanation video is going to be this…