Home › Columns › Sean Leary › QAnon Sept. 24 Conspiracy Will Shock You, But Is It The End Of The World?

I always love it when a batcrap crazy conspiracy theory gets trumped by an even more insane one, and so, imagine my surprise and delight this week.

I’d already been getting ready to write about the conspiracy theories surrounding the death of Queen Elizabeth, which included her being a lizard person, her being a clone, her being a body double for the real Queen who was an immortal lizard person who was going to now possess Meghan Markle’s body, and, not to be outdone, that she was assassinated as part of the plot to reinstate Donald Trump as president, known, like an ’80s hair metal band, as The Storm.

According to this doomsday conspiracy theory,  the world is going to end… drum roll please… TOMORROW.

There are conspiracy theories all over TikTok, Telegram, Facebook, and Twitter saying that there will be a global-wide blackout that will cause a ‘great reset’ in the economy, politics, pop culture, and, of course, the presidency, where Donald Trump and JFK Jr. will ascend to the presidency and put the reptilian pedophile cabal led by Hillary Clinton and Joe Biden in military prisons. 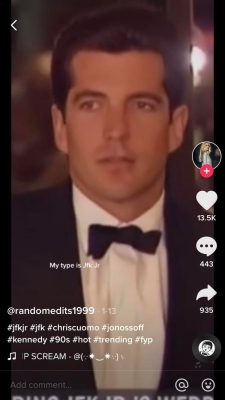 Whatta ya know, JFK Jr is EXACTLY the type of this random TikToker. What were the chances an incredibly handsome dude would be so appealing to so many women???

Some say that a blood red moon and some astrological strangeness is going to cause a meteor shower to strike earth.

Some others say that Putin is going to launch a nuclear attack.

Still others say that it’s going to be a cyber attack from China.

A few say it’s going to be a horrible gas attack from Uranus.

And still others say that you should get checked for diabeetus.

Those last “others” are really just one person, Wilfred Brimley. But it’s probably good advice.

But seriously though, or at least as seriously as you can take this conspiracy theory, there is a somewhat unified reason for these sudden conjectures regarding the pending apocalypse.

They all go back to a speech given by Friedrich Merz, leader of Germany’s Christian Democratic Union party. During his speaking engagement earlier this month addressing Russia’s invasion of Ukraine, and unveiling that the new pop tart flavor in Germany was going to be Sauerkraut, Merz misspoke and said September 24 (instead of February 24, the first day of the invasion) would be “a day that people would remember.”

The theories around Merz’ “September 24” comment quickly ricocheted around German QAnon Telegram channels, according to Vice.

In addition, people began noting that on a “Simpsons” episode that ran as the ninth episode of its 24th season, there was an apocalyptic event that showed preppers getting ready for the end times.

So, an old German guy messed up a date, and at one point the “Simpsons” did a show making fun of survivalists, and that leads to the end of the world happening tomorrow.

It’s not really going to be the end of the world.

This is just the prelude to The Storm, where Trump and JFK Jr. are going to be installed as president and vice president.

Now, if it seems like you’ve heard this one before, you have. 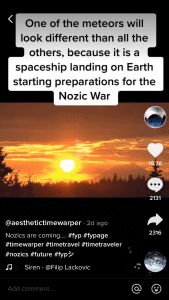 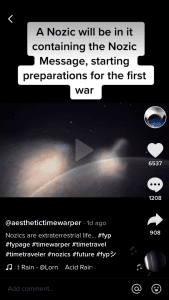 This, also, comes from an episode of “The Simpsons,” which is now, apparently, the most reliable place we go now for our news. Bite it, CNN!

I always love how there are competing conspiracy theories over what day and how the world is going to end.

Speaking of, ANOTHER Time Traveler calling himself FutureTimeTraveler who vehemently disagrees with the TT2714. FutureTimeTraveler says that the aliens, which will be over 7 foot tall, won’t be invading until next May. May 24, to be exact. So, at least we’ll get to see who wins the Super Bowl and the Oscars before they take over. And by “take over,” I mean, the NBA. With that height? Damn, those aliens will be lottery picks!

But, if the world does end tomorrow, there is one good thing to come out of this.

At least Adam Levine’s wife will probably get to see him and his mistress die an excruciating death.

So, she’s got that going for her, which is nice.