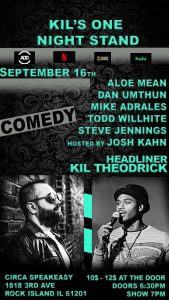 a surprise one night only event at 7 p.m. Thursday! Don’t miss your chance to see Kil live before you’re seeing him on your TV weekly.
Hosted by Joshua Kahn
Also Featuring
Mike Adrales (QC)
Steve Jennings (QC)
Jameson Cox (Des Moines)
Todd Willhite (QC)
Aloe Mean (Des Moines)
Dan Umthun (Des Moine)
Doors are 6:30pm / Show 7pm
Tickets $10 by calling the Circa 21 Box Office at 309-786-7733 ext.2 or at www.thecirca21speakeasy.com
Tickets are $12 at the door
To listen to part one of my podcast with Kil, CLICK HERE.
To listen to part two, CLICK HERE.