Ok, so about 50 percent of you hate Donald Trump.

And, about 50 percent of you hate Joe Biden.

But, probably about 90 percent of you, whether you like his music or not, think Kanye West is pretty freaking insane.

This week, Ye, as the kids like to call him, was more crazy like a fox with the brilliant public relations stunt of announcing he’s going to run for president.

Never mind that he hasn’t formally filed to run, and never mind that he’s way past the deadline to do so or be on the ballot in a vast majority of states, so technically, he has no chance. The fact that he announced it at all was absolute genius on his part, because the actual campaign of running for president wasn’t what this was all about, it was about the attention he’s gotten and will get for announcing a campaign.

Say what you want about Kanye, but he is masterful at manipulating the media and generating tons of attention for himself. Even if it is often under the adage of “no press is bad press,” because, let’s face it, he routinely gets his share of bad press. 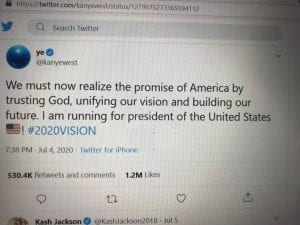 But I’m actually kind of amused by Kanye and his goofy stunts, including this one. As we watch as the mainstream media actually gives this ridiculous publicity grab credence by going to the point of even arguing whether Kanye might tip the election to Trump or Biden by siphoning off part of the vote, Kanye just continues to get more time in the limelight. Good for him!

And, good for me!

Because, in the spirit of Kanye West, I’d like to formally announce that I AM RUNNING FOR PRESIDENT OF THE UNITED STATES OF AMERICA.

That’s right. Never mind that I haven’t filed or that it’s past the deadline in several states. Never mind that I’m not especially well known outside the Quad-Cities and some snippets around Chicago and Southern California. All that matters is that I AM ANNOUNCING FORMALLY THAT I’M RUNNING FOR PRESIDENT OF THE UNITED STATES OF AMERICA. 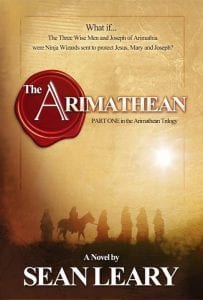 Now, let me state right away that this has nothing to do with me trying to sell copies of my books, which you can get locally at The Book Rack and online at Amazon.com and a variety of other online booksellers. While you may really enjoy my best-selling collection of short stories, Every Number Is Lucky To Someone, which was nominated for an Oprah’s Book Club pick, or my science-fiction novel, Black Knight Apocalypse, which Diana Gabaldon, author of the Outlander series called “Very imaginative,” or even my children’s book with my son, Jackson, Here Comes The Goot!, or, let’s say my fantasy series, The Arimathean, which asks the question, what if the three wise men were ninja wizards sent to protect Jesus from being killed by the Satan-possessed King Herod?, I insist that I’m not just making this presidential announcement to sell my books! Not even my new novel, due in stores worldwide August 8, called Subliminal Cartography, which has been described by critics as “a brilliant cross between ‘Magnolia’ and ‘The Royal Tenenbaums.’”

No, I’m running for president to make some incredibly important changes to this country, because we’re a country of dreamers and doers, of people of action and accomplishment, who get things done, who love our freedom and our country, who are humble people who value hard work and commitment, and that’s why if I’m elected, I’ll be MAKING AMERICA KICK MORE ASS THAN EVER, DAMN IT!

So, how am I going to do that?

Glad I’m imagining that millions of you are asking, let alone giving a crap, because otherwise I’d have to think of another idea for a column this week!

Now, of course, I’m not going to be revealing ALL of my agenda at this point, or even my vice president (The Rock) but there are a few things that I will be doing as president that you will be thrilled to read about. Such as:

Admittedly, the last one is a blatant attempt to court Kanye voters.

So there you have it – Leary 2020, MAKING AMERICA KICK MORE ASS THAN EVER, DAMN IT!*