Throughout this week, we’ve been featuring stories on Quad-Cities band Einstein’s Sister, which is releasing its first record in almost two decades this weekend, during Record Store Day at CoOp Records in Moline.

It’s Friday! with Sean Leary runs every, yeah, you guessed it, Friday, on QuadCities.com.

But that’s one of the only ways in which the band has been completely transparent.

Throughout this week, I’ve been scanning the archives and corners of the internet for information on this “Einstein’s Sister,” in an effort to present to you a complete picture of this band that many of you, especially those of you who haven’t reached puberty yet – which may or may not include some members of the band – haven’t discovered yet.

But now, well, you’re about to discover more than you bargained for.

You’re about to get all you can eat of Einstein’s Sister.

You’re about to get a full buffet of Einstein’s Sister.

Hmmm, not quite there yet. 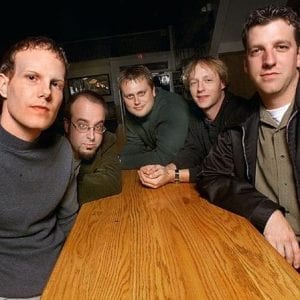 You’re about to find out THE SHOCKING TRUTHS AND SECRETS BEHIND THE BAND EINSTEIN’S SISTER!

Especially the caps and exclamation point. Now that looks like something a real internet weirdo would type. Thank you for the suggestion, Perez Hilton. And for telling me I had spinach in my teeth. Maybe not so much thank you for putting your hand in my mouth to try to take it out. But, the thought was there.

Anyway, here are THE SHOCKING TRUTHS AND SECRETS BEHIND THE BAND EINSTEIN’S SISTER!!!!!