Theaters in the Quad-Cities and nationwide are canceling spring and summer shows, due to Covid-19. The latest response to the global pandemic is the Augustana College-based Mississippi Bend Players (MBP), which is shelving its 2020 season.

Jackie McCall is in her first year as MBP producing artistic director, and this was to be the fourth season for the professional summer-stock company. It planned to start rehearsals for Neil Simon’s “Broadway Bound” June 7, with performances June 19-28 at Brunner Theatre Center, Rock Island.
“When we just looked at ahead at what could happen, we thought it was a safer choice because we have actors coming from out of town; we had students, interns coming from all over,” she said recently. 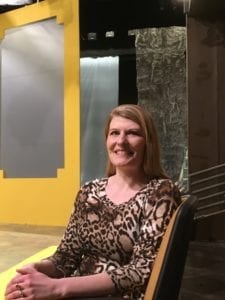 “Especially, when we looked at the housing situation for the interns, social distancing really wouldn’t have been something we could have kept up on, because they’re housed together. That was a major concern, and if we couldn’t include students in our season — a huge part of our mission is to give them that educational experience.”

McCall said lack of grant funding, and safety concerns for cast, crew, and patrons, all influenced the decision. The paid staff was to include about a dozen high-school and college-age interns, with three full productions.

The grants they applied for – those funds are being redirected to help with Covid initiatives, like from Regional Development Authority and Scott County Regional Authority, McCall said.

The season was to feature a Sarah Ruhl play – written for her mother Kathleen to perform the lead – and the musical spoof, “Ruthless.”

“So everything from a financial standpoint would have had to come from ticket sales, in order to cover the season, and from our donors,” McCall said. “We know a lot of them are going to be in a financial bind as well, and that they may want to give their contributions to another organization right now, to help feed people, house people, give them that medical treatment they need.”

As for potential theater patrons, “We didn’t want to invite them to come into a season where they would end up being part of an outbreak,” she added. “It would have just been a really scary thing.”

McCall cited a recent national survey of patrons, which asked them when they’d be comfortable going back to live shows, post-pandemic. “The resounding answer from people was, I don’t think I’ll go back as soon as it’s open,” she said. “I’m probably still going to wait a few months, just in case. It was things like that that make me go, we could have put on a fantastic show and not been able to pay any of the bills. That’s not the right thing for an arts organization either.”

The Clinton Area Showboat Theatre announced at the end of March that its 2020 summer season would be canceled because of the coronavirus crisis. McCall said that’s affecting lots of venues – such as the spring cancellation of Augustana’s “American Idiot,” QC Theatre Workshop’s “Prelude to a Kiss,” Music Guild’s “Secret Garden” and Spotlight Theatre’s “Oliver.”

“There are so many theaters around the country, ’cause of course I have a lot of friends working in the profession, and it seemed like every day on Facebook, I would see another large professional theater canceling their season,” McCall said.

The New York Times reported Friday that the Public Theater’s free Shakespeare in the Park would be canceled this summer in Central Park.

The pandemic has forced cancellation of programming and taken a huge financial toll at arts institutions around the world, the Times noted, citing other summer events — like the Oregon Shakespeare Festival and Williamstown Theater Festival — already being called off.

World-renowned Williamstown (in northwest Massachusetts) will rehearse, and record all seven of its planned productions and release them in audio form on Audible. The productions will feature the same performers that would have appeared onstage, including Kate Burton, Bobby Cannavale, Anna Chlumsky, Carla Gugino, Audra McDonald and Taylor Schilling.

Other Q-C theaters haven’t publicly announced summer closures, which may impact planned June productions of “Tarzan” at the Spotlight, and “Spamalot” at Music Guild. Everything is on track with Guild so far, with an expected first rehearsal May 4.

“Broadway Bound” was to complete a beloved Neil Simon trilogy at MBP, each directed by Cory Johnson (of St. Ambrose), and each co-starring Tristan Odenkirk and Mike Schulz. The 1986 play (a Pulitzer finalist for drama) is the conclusion to Simon’s semi-autobiographical trilogy which began with “Brighton Beach Memoirs” (done at MBP in 2017) and “Biloxi Blues” (done in 2019).

It was to reunite all the major MBP “Brighton Beach” cast in their same roles. The last installment follows Eugene (Odenkirk) and his brother Stanley (Sam Jones) as they try to break into show business as professional comedy writers.

A season of disappointment

Odenkirk, 22 (an Augie senior whose uncle is acclaimed TV/film actor Bob Odenkirk), was looking forward to “Broadway Bound” as a capstone to his Q-C experience, following college graduation, which also will not happen in person.

“It’s a huge disappointment,” he said. “Mike Schulz keeps telling me, this is just one of those things…we’re gonna make it happen eventually. It’s not off the table.”

After last summer’s Army and World War II setting for “Biloxi” (for which Odenkirk shaved his head), “Broadway Bound” would return to “a huge degree of familiarity, I was so excited to come back to this show – this space, this family and these characters we were familiar with,” he said. 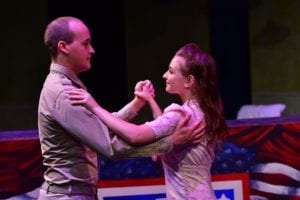 “There was stuff Eugene does in ‘Biloxi,’ that informs his character a little more; I was excited to explore that,” Odenkirk said.

Like his brother Keenan (also an Augie grad), Tristan has been a big presence on Augustana’s stage, including roles in Sarah Ruhl’s “In the Next Room,” “Big River,” “Beginner’s Luck,” as well as key parts in QC Theatre Workshop’s “Gruesome Playground Injuries” and “The Goat.”

Odenkirk was also directing the Workshop’s “Prelude to a Kiss” and sound designing Augie’s “American Idiot” (based on the Green Day album). He was also involved in an improv troupe, playwriting and his college classes.

He and Schulz hope to perform in a two-man play later this summer under MBP.

Odenkirk also was looking forward to seeing Kathleen Ruhl in July, in “For Peter Pan on Her 70th Birthday,” by Sarah Ruhl, and directed by Jennifer Popple — who hosted the playwright for a talk and Q&A at Brunner in March 2019. Sarah (a two-time Pulitzer finalist) was rumored to make another appearance here this summer, Odenkirk said.

“I performed for her, she was great,” he said of her residency last year. “I was so excited to be able to see her again.”

The 2016 “Peter Pan” play, which is filled with Q-C references and memories, was created for her mother, Davenport native Kathleen Kehoe Ruhl. The 70-something actress, an Assumption High alum, played the lead role for the first time in a Chicago production in spring 2017, and described the show as “a gift for which I lack adequate words to thank the playwright who wrote it for me.” 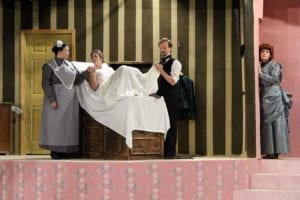 In the Next Room

McCall said Kathy Ruhl was among the many MBP cast and crew who were totally sympathetic to the troupe’s plight.

“Honestly, pretty much everyone said, I kind of thought this might be the case,” she said of the cancellations. “Everyone’s been so nice about it. It made a really horrible job a little bit easier, because everyone’s been so understanding.”

Ruhl was “so gracious and she said she totally understood and thought it was the right thing to do,” McCall recalled. “We were so worried about that cast in particular, because the actors are older, and would be in that high-risk range.”

“She said she would love if we could do the show another time; she’d love to come and do some classes with our students,” she said. “She said she just loves coming to the Quad-Cities. We are certainly going to stay in touch with her and try and make something happen.”

McCall hopes to reschedule the same shows for 2021. “There are so many other things we have to contend with, but I think there’s absolutely a good possibility for some or all of the shows to be back in 2021.”

“It’s tough. It was certainly not the way I had intended to start my first summer with Mississippi Bend Players, but quite unavoidable,” she said.

“Everyone right now, they’re being resourceful, and creating art in an engaging new way,” McCall said, noting Shelley Cooper is planning an original musical revue, ideally for late summer. “That’s what we’re gonna try and do. We’re still excited. That’s what I’m kind of holding on to, that we’ll have better days by then.”

Jonathan Turner
Jonathan Turner has been covering the Quad-Cities arts scene for 25 years, first as a reporter with the Dispatch and Rock Island Argus, and then as a reporter with the Quad City Times. Jonathan is also an accomplished actor and musician who has been seen frequently on local theater stages, including the Bucktown Revue and Black Box Theatre.
See More Articles From Jonathan Turner
Tagged: Augustana CollegeAugustana Theaterjackie mccalllocal events cancelled due to coronaviruslocal theatermike schultzMississippi Bend PlayersMolineRock IslandSpotlight Theatertristan odenkirk