T.S. Eliot had it all wrong. 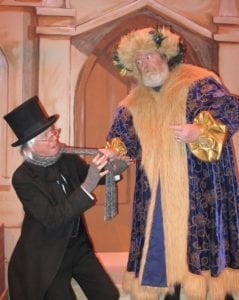 In “The Waste Land,” the poet wrote “April is the cruelest month.” Well, five days before we can kick it into the dustbin of history, it’s safe to say that dishonor now belongs to March. At least March 2020, which has seen one bone-crushing loss after another for many around the world, me especially.

Just one of the latest is from our beloved Quad-Cities theater community – of which I’ve been honored to share as longtime arts reporter for the Dispatch/Argus (and later Quad City Times), as well as piano accompanist and occasional stage performer.

The singular John VanDeWoestyne – a large man with a big name, a booming voice, enormous heart, and even bigger theatrical talent – left this earth Wednesday, March 25. The Geneseo institution (he was a veteran city employee, retiring as public works director) was just 66, and not only leaves behind his wife Judy, and daughters Emily and Shay, but a staggering body of work and memories we can cherish.

Facebook was flooded with tributes. Vande’s home base – the bucolic, intimate Richmond Hill Barn Theatre in Geneseo – posted: “A brilliant actor and consummate director, John was also the ultimate mentor and leader within our organization for more than 40 years.

“His was the cool head, the warm heart, and the steady hand that could always be relied upon to chart the best course for our theater, which he loved so passionately and worked for so diligently,” Richmond Hill Players wrote. “Whether performing onstage, shaping productions from behind the scenes, welcoming new volunteers to the barn, guiding the board of directors or interacting with the general public, John touched so very many lives as the face and voice of RHP. He was, in essence, ‘Mr. Richmond Hill’ and his absence is deeply felt by all.” 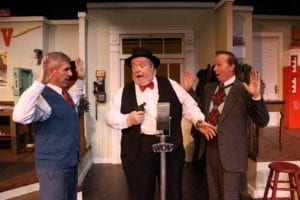 Vande was involved in 80 shows (most as actor or director) at the barn, and served a total of 10 years as its board president. RHP veteran actress Diane Greenwood recalled he did it all, including handling reservations, memberships, selling ads for RHP programs, and major fundraising drives.

“I called him Mr. RHP for good reason,” Greenwood said. “He loved our community theatre in-the-round with every fiber of his being, and he devoted heart, soul, talent and innumerable hours ensuring its success.

“Vande could tell you exactly the year of every show he had directed or acted in, and the part he played, as well as various other anecdotes about the production,” she recalled. “He kept every script of every production he has performed in or directed, every press release, every memento. He had the proverbial steel trap mind and memorizing lines came easily to him. He had a glorious singing voice. He was the first to admit that he couldn’t dance.” 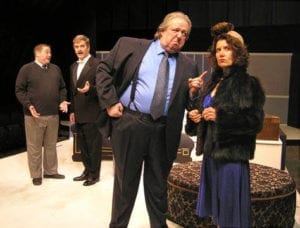 The two met in 1984 when Diane was cast as Louisa and he as El Gallo in “The Fantasticks,” her first Richmond Hill production. “He directed me in numerous shows, and I have shared the stage with him several times, and he introduced me to the fabulous Quad City Music Guild where my first show there was as Sister Amnesia in ‘Nuncrackers.’ He was its book director and the outstanding Val Pieper was music director. I’m not a trained singer and would never have had the courage to audition for Music Guild but for Vande.

“He would joke about having many wives, and I played one when we shared the stage in ‘Lend Me a Tenor’ at Playcrafters. We were ‘married’ again in a RHP show called ‘In-laws, Outlaws and Other People Who Should Be Shot.’”

“He was outstanding at drama; he was outstanding at comedy. He was sublime,” Greenwood said. “When we played opposite each other, we would have a gentle competition to see who knew lines cold the first. When he was in a show, you expected a sellout; his fans were legion.

Vande met his wife, Judy, at Music Guild, Moline. He proposed to her in Prospect Park. This April 7 would be their 30th anniversary. His license plate reads THEATRE. “It’s what he lived and breathed,” Greenwood said.

“We can’t imagine life without Vande. I am unexpectedly president of RHP, and the person I need the most to help me has finally become a dancer, in Heaven.”

Antoinette Nebinger – who played the lead in Circa ‘21’s “Sister Act” (2016) when Vande was the Monsignor — posted: “John, forever a lifter of spirits, kind soul, friend, father, husband. Sharing the stage with you at the beginning of my professional journey and you being there with kindness and words of encouragement will never be forgotten.”

Vande’s versatility was certainly chief among his impressive theatrical attributes, and his passion for shining behind the scenes as well as on stage. Despite his encyclopedic knowledge and titanic talents, he seemed the most down-to-earth, friendly guy, with a wickedly dry sense of humor. He had every right to feel superior, but never showed it.

The last time I saw him, I spoke with him in early December 2019 (which seems years ago), to preview his Spotlight Theatre debut as Kris Kringle in a new production of “Miracle on 34th Street: The Musical.”

Though he’d been on just about every stage in the Q-C, Vande never had embodied Santa. I wrote for the paper: “With his burly, jovial appearance, and innate kindness, the 66-year-old Geneseo man seems a natural,” and he had a clear affinity for the show and its pint-sized star, 10-year-old Avie Birdsell. 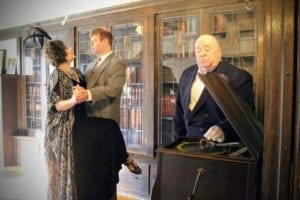 He said the Moline girl, who played Susan, was “the best part of the show for me.”

“She’s really sweet; she’s really talented,” VanDeWoestyne said. “The audience is going to love her.” That was his good nature, to deflect attention from himself.

“He was one of the most caring, thoughtful, kind, generous, supportive people we have ever had the chance to know,” Spotlight Theatre co-owner Sara Tubbs said Wednesday. “We are so blessed to have had the chance to be on stage with him this past Christmas. He truly embodied the magic of Kris Kringle and brought so much joy to all of us around him.”

In his Spotlight bio, Vande said his favorite roles included Tevye in “Fiddler on the Roof,” Alfred P. Doolittle in “My Fair Lady,” Fagin in “Oliver,” Chauvelin in “The Scarlet Pimpernel,” Oscar in “The Odd Couple,” Big Daddy in “Cat on a Hot Tin Roof,” and Willy Loman in “Death of a Salesman.” 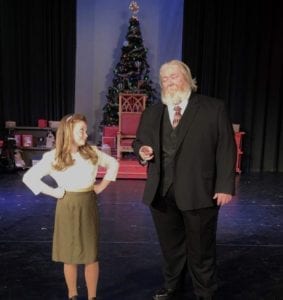 Like any good actor, I remember him saying he was willing to do anything to his hair (and facial hair) for a part. That included shaving his head for Music Guild’s “Sunset Boulevard” in 2017.

“You have inspired so many and have left a considerable hole here in our community,” posted Christina Myatt, who played the lead in that show. “They say it may rain tonight and there could be thunder — I don’t know, perhaps it is not thunder but the roaring laughter of you and Brian together again and laughing!!”

She was referring to the equally incomparable, imposing Brian Nelson – my former fellow Dispatch colleague who was a fanatic about language and musical theater. Similar in girth, vocal prowess and personality (a true gentle giant) to Vande, Nelson tragically also died suddenly in a past March: at 60 in 2012.

Just about five weeks before Brian’s death, the pair (who were good friends) shared the stage in the landmark Sondheim musical “Company” at the former District Theatre, Rock Island.

Jason Platt of Davenport (another frequent actor and director) recalled he was in his first Guild show in a 1993 “Fiddler,” where Nelson was Tevye and Vande was Lazar Wolf. John later got play the immortal lead in 2005. 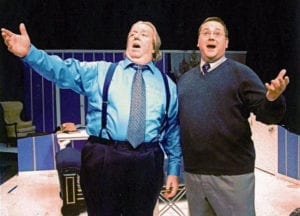 “I appreciated his friendship, leadership and his humor,” Platt said Thursday. He was especially struck when Vande came up to him after a 2009 New Ground Theatre production of “The Boys Next Door” Platt was in, and said it was the best show he’d ever seen.

“He wanted to do a production of his own, and that was a really high compliment,” Platt said. “The power of the story, John wanted to tell himself, and I was happy when he got to.”

Vande later directed the play (about four men with mental disabilities who live in a group home) at RHP in 2015.

As an actor, “John could nail a line like no one else, but he could also play those silent moments between the lines with excellence,” said veteran RHP lighting designer Jennifer Kingry.

As an example, she said during 2014’s “The Odd Couple,” with John playing Oscar Madison (one of his “bucket list” roles), her favorite moment each night was when Oscar answered the phone during the weekly poker game with the guys. He turns away from them and embarrassedly mutters a few endearments into the phone, as though he has a secret sweetheart on the line. 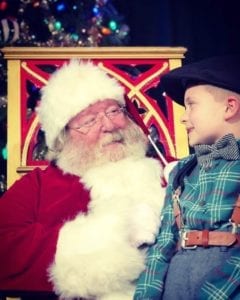 Then he turns back to the table and calls, “Hey, Murray, it’s your wife!” “It’s classic Neil Simon, always gets a big laugh. But what hit me, every time, was the big, warm-but-mischievous smile that John beamed as his friend comes to take the phone.” Kingry said. “It did more to sell the notion of Oscar Madison as a slob with a heart of gold and a guy who loves his friends then all of Simon’s one-liners put together.

“John was so good at smiling with his eyes,” she said Thursday. “He could play anything with his eyes – happiness, sadness, pensiveness, tenderness.  I expect people tend to remember the big moments the most, and John certainly knew how to play to the back of the house, but it’s those little moments with his eyes I cherish most.”

Wednesday night, Kingry went to the barn, “sat in the audience by myself and cried my heart out. It just feels impossible to imagine the place without John; I kept expecting to hear his voice down the hall or to see him walk in, which happened so often when I was working out there on my own,” she said.

“I found myself wondering if anything I ever do there in the future will ever mean quite as much to me, without him there – it meant so very much to earn a word of approval or a thumbs-up from him.” 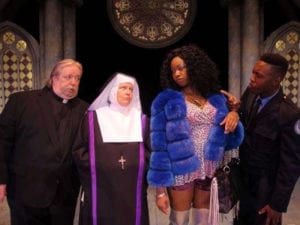 What I loved most about him is that both on and off stage, he just seemed to unabashedly love life. And it will be hard to go on without him. The message of “Miracle on 34th St.” was, “Faith is believing in something, even when common sense tells you not to,” Vande said in December.

That reminds me of the John O’Hara quote about one of my favorite composers – “George Gershwin died on July 11, 1937, but I don’t have to believe it if I don’t want to.”

The same night Vande died, I also heard that my former editor (the tireless, hard-working, rock-solid Laura Fraembs) died at age 60 after sustaining injuries in a fall at her home. I can’t believe either really happened.

Damn you, March, for being so cruel.