Home › Columns › Sean Leary › Just What Exactly Is ‘The Black Eye Club,’ And Why Are So Many Celebrities A Part Of It?

Just What Exactly Is ‘The Black Eye Club,’ And Why Are So Many Celebrities A Part Of It?

How many people do you know who currently have black eyes?

How many people in the past year have you seen who have had black eyes?

Just in general, how many people can you remember having black eyes in your life over the past year, two years, five years, ten years?

Unless you’re a boxer, you train in MMA, or you run an underground fight club (damn! I wasn’t supposed to talk about that!), you probably don’t see many, if any, folks with black eyes running around. Heck, I trained in karate, boxing, tae kwan do, and muy thai kickboxing over the course of about about 20 years, and I didn’t even see that many folks with black eyes.

And yet, somehow, there’s been an epidemic of black eyes on celebrities and public figures over the past couple of years.

Which is incredibly strange, and even stranger the more you think about it.

I mean, think about the fact that we proletarians among the working class hoi paloi rarely see people walking around among us with black eyes, and we mix and mingle at places which could potentially afford us a much greater chance of encountering them. We don’t have bodyguards, or secret service agents, and we don’t mingle with the rich and famous, who don’t exactly swim in dangerous circles of potential fisticuffs. “After all, who wants to break a nail after that $5,000 manicure, am I right? Am I right?”

Yes, you’re right, abstract snobby celebrity rich person I threw into there for comedic effect, you are very right.

Seriously, this is strange. It’s utterly bizarre to see everyone from Vladimir Putin to Barack Obama to The Pope sporting black eyes.

A wide range of the dozens of rich people and celebrities who have been recently seen with black eyes. Underground fight club? Or something more nefarious???

I’m not kidding. Here’s a list of just some of the celebs and prominent people who have sported black eyes over the past year or two:

And, of course, because it’s incredibly strange, it’s spawned a fantastic conspiracy theory.

That the black eyes are all part of an Illuminati ritual, and that as part of getting into their little club, the celebs have to get black eyes and be seen in public with them.

According to the UK Daily Mail:

“A bizarre conspiracy theory has emerged suggesting that celebrities seen sporting a black left eye are part of the Illuminati.

Elizabeth Hurley, Boy George and Robert Downey Jnr. are among the A-listers who have been photographed with bruising in the eye area in recent years.

Former US President George W. Bush, along with the Pope, Prince Philip and Prince Andrew, have all also been photographed with black eyes.

According to some conspiracy theorists, the black left eye is part of a cult or ‘Illuminati’ high-level initiation ritual during which the pledger is 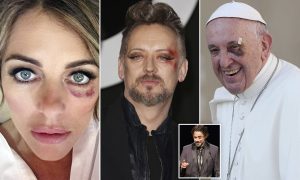 My money is on the Pope to take the other two.

said to be forced to ‘eat pain’ in a quest to become more powerful.”

Well, if I was Boy George, or Elizabeth Hurley, I’d probably ask for my money back. I’m not seeing the results. When I think of Illuminati membership, I don’t think of the biggest perk being “starring” in a late night infomercial.

“Author and internet radio show host Sherry Shriner –  who wrote the book Interview With The Devil, in which she claimed to converse with Lucifer, has spoken of the link between these black eyes and ‘soul scalping’.

According to Shriner, government leaders, people on TV with their own shows and hundreds of popular entertainers have sold their souls to Satan.

‘You cannot be on TV now, without signing on the dotted line. The bizarre recurrence of facial bruises on Illuminati politicians and entertainers has resulted in speculation that their souls have been replaced in a satanic ritual called “soul scalping”,’ she said. 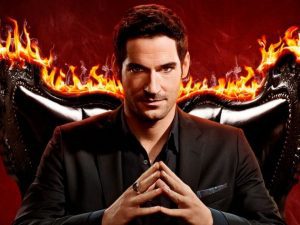 Not only does he have his own TV show, but he enjoys crafting his own shiny furniture, soul scalping, and long walks on the beach with that special succubi.

She said that this can one done in a number of ritualistic ways, all of which result in a ‘possession’, whereby the human soul is removed and the body taken over by the demonic entity.

In conspiracy circles, this process is also known as a ‘walk-in’. Some people believe the blackened eye is a result of soul scalping.”

Oh my God! Can you believe this!??! Can you believe I’m breaking this story right now??!! I mean, seriously, can you imagine how stunning this is, how earth-shattering this information is, and how incredible it is that the mainstream media has been ignoring it??? After all, there are really only two explanations for so many rich celebrities having black eyes, and those are underground fight clubs and demonic possession. DUH! EVERYONE knows that!

There actually IS a pretty logical and reasonable explanation for all of these rich celebrities and politicians, people in the public eye (pun intended), people who are subject to a certain vanity and concern for their image, being seen with these black eyes.

It’s not as fantastic or spicy as the other theories, so I hate to burst your bubble. But it is more realistic and logical.

After all, rich celebrities are very well-known for getting a lot of cosmetic surgery. It’s such a well-worn subject that stand-up comedians and pop cultural commentators such as myself have been ribbing them about it for decades. Johnny Carson had a fleet of jokes about it regarding any number of celebrities going back to the 1970s “Tonight Show” era. 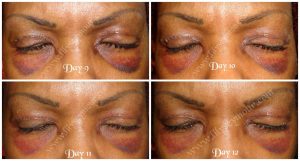 Go to most any cosmetic eye surgery site and you’ll see pictures of people with bruising around the eye post-surgery. And post-Illuminati ritual.

And this illustrates an interesting point about the world we live in right now. With the plethora of information we have available to us, we’re able to access and accumulate a staggering amount of data. And with that data comes a sort of pattern recognition that takes place, because it’s a psychological habit for our brain to try to make sense of it. And as various people start to put together the pieces of the puzzles and start to see certain trends and waves of behaviors, people will then react to the news of these patterns being put out there by their brains seeking to assimilate them through some sort of filter of logic to place them within the known world.

But the thing is, nowadays, the first reaction of so many people is to place these things within the realm of conspiracy theories and outlandish explanations which, yeah, COULD be potentially plausible in some cases, but upon even further examination, are usually eclipsed by something much more reasonable, banal and far less interesting.

And I admit, I do love a good conspiracy theory. I really do. They’re very entertaining. And when I first heard about this “black eye club” thing, I was intrigued and fascinated by it, thinking, “this is so utterly bizarre! why would so many famous and rich people have black eyes when so few regular people don’t???” Until I got to actually researching it, and thinking about the fact that the vast majority of regular people don’t have the money or inclination to get plastic surgery on their eyes, and that cosmetic surgery to remove bags or crows feet is actually one of the most popular surgeries out there. So, boringly enough, yeah, it makes perfect sense that a bunch of rich celebrities are getting cosmetic surgery and that their schedules preclude them from avoiding the public completely during their recuperation, so they get seen having a black eye.

I’m not sure why the Pope would be getting it, but maybe he legit had a black eye. Maybe there’s an underground fight club at the Vatican?