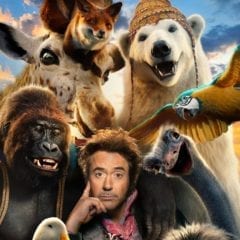 Dolittle arrives on digital today, Mar 24 and 4K Ultra HD, Blu-ray, DVD and on demand Apr 7 from Universal Pictures Home Entertainment. Robert Downey Jr. plays Dr. Dolittle, a man who can talk to animals. The cast also includes the voice talents of Emma Thompson, Rami Malek, Selena Gomez, John Cena and Tom Holland, among others. After losing his wife, Dolittle he locks himself away behind the high wall of his manor but is forced to set sail on an epic adventure when the queen falls gravely ill. Helping Dolittle in search of a rare cure are his animal friends — including Chee-Chee (Malek), an... Read More