Home › Columns › Sean Leary › Did Avril Lavigne Die And Get Replaced With Her Illuminati Body Double???

There have been a lot of horrible things going on in the news lately.

So I think it’s time we had a difficult discussion on a sensitive topic that, quite frankly, I’ve been avoiding talking about for a while.

No, not my relationship with Kim Kardashian. (Fifty feet MEANS fifty feet, Kanye!)

But rather, the fact that Avril Lavigne possibly died (or was murdered) and replaced with an Illuminati body double.

But what about the one or two Amish folks out there, who are just getting onto the internet, perhaps just trying out QuadCities.com, and seeing my column for the first time? Maybe those folks, now beardless and hatless, and still trying to figure out zippers, are completely in the dark about this incredibly important bit of news about Avril Lavigne, who, it’s well-known, is incredibly popular among the Amish. (They absolutely LOVE her song “Girlfriend.”) Which is ironic, because that 2007 song and its video are part of the alleged evidence of the body swap.

(Note: The previous paragraph was meant as a joke and was not meant to offend the Amish, the beardless, the hatless, people still trying to figure out zippers, the Swedish super group ABBA, the ghost of Casey Kasem, Carrot Top, Rerun on “What’s Happenin’,” Todd, the mean ocean, your mother, the trollope on the street corner, Harry Potter if he existed, or Mr. Schoeppenhauer. Mea culpa. Gracias.)

Anyway, as I was saying before that necessary pre-apology before I triggered anyone, in “Girlfriend,” Lavigne is shown in multiple roles. She plays a kind of dowdy, modest girl with glasses and reddish brown hair; she plays a rebellious, dark-haired rock vixen who is trying to take bespectacled Lavigne away; and she plays the blonde-and-pink haired singer of the song. 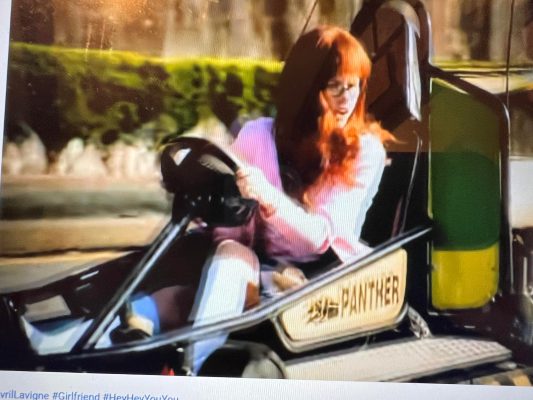 Is it Avril Lavigne, Velma, or MELISSA???

Now, of course, the deep psychological analysis of this would say that it’s the singer’s id (brunette), ego (raven-haired) and super-ego (blonde) all battling it out to see who’s going to win the hand of the winsome and boring looking male model in the video.

But I think you and I know better.

According to conspiracy theorists, this is the story of a girl named Lucky.

Oh no, wait, that’s according to Britney Spears.

According to conspiracy theorists, this is the story of how a girl named Melissa Vandella, who was bespectacled and nerdy, became friends with blonde singer Lavigne, and, became her body double for security reasons and in music videos.

However, she soon assumed a more sinister purpose. 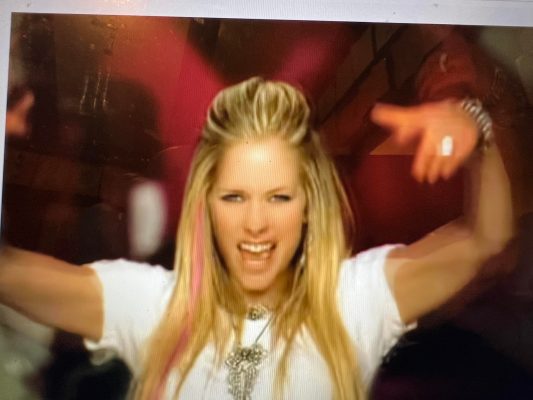 “Whew! Somebody cut the cheese in here! Will ya light a match, Melissa?”

According to these nefarious theories, Lavigne resisted joining the Illuminati and didn’t want to participate in the blood sacrifices required to be a part of the group and continue and increase her fame. However, by this time, she had become too famous, and knew too much, and needed to be eliminated. And, so she was, and, so, enter: Melissa Vandella the body double.

According to this theory, the real Lavigne was killed, but it was made to look like a suicide, in 2003. Her record company and handlers were talked into / coerced into having the body double Melissa, who was secretly part of the Project Monarch Illuminati mind control program, take over for Lavigne and use her songs for back-masking demonic messages and general mayhem, like, you know, getting the youth to do subversive things like wear ties with t-shirts and cargo pants.

After the popular singer died in 2003 at the first explosion of her success (note that she was blonde-haired when this came about, hence the blonde in the video), the Illuminati (represented by the raven-haired singer) sacrificed her to Satan and replaced her with a demonic acolyte who was a willing altar for a reptilian shape-shifting demon, the nerdy Melissa, who literally sold her soul to become famous and replace the real Lavigne. Oh, and there were a lot of subliminal messages about shopping at Hot Topic.

There are variations on this theory.

The theory alleges that the pressures of fame, combined with the death of Lavigne’s grandfather, sent her into a deep depression after the release of her 2002 debut album, Let Go, and that the singer died by suicide shortly after.

The origins of the theory can be traced back to the 2011 Brazilian blog “Avril Está Morta” (“Avril is Dead”), which led to conversations on internet forums sharing supposed evidence of Lavigne’s replacement, although some say the theory goes back as far as 2005. The theory gained more traction in May 2017, when a Twitter user posted a thread recounting the theory.

Proof that Lavigne was replaced by a body double????

According to the conspiracy theory, a look-alike named “Melissa” was originally hired to distract paparazzi, protecting a reclusive Lavigne. It alleges that Lavigne befriended “Melissa”, that shortly before the singer’s supposed death her body double was taught how to sing and perform like the musician, that after Lavigne’s death her record company buried the news and replaced her with “Melissa Vandella” for a continued profit, and that “Melissa” recorded all of Lavigne’s future work. Much of the evidence cited in support of the conspiracy theory is the purported appearance and disappearance of various moles and other skin blemishes in pictures of Lavigne over time, as well as a promotional photoshoot in which she has the name “Melissa” written on her hand.

You didn’t have to make it this obvious. Geez.

In addition, there’s supposed subliminal messaging in her album, Under My Skin, which would’ve been the first recorded by Melissa/Avril.

According to the Wikipedia, “The conspiracy theory soon gained traction on internet forums such as ATRL and Godlike Productions, where self-proclaimed “Avril Rangers” shared evidence. One ATRL post in 2012 suggested that the original Avril may actually be alive, using a picture of what appeared to be the singer buying cheese at a time when “new Avril” was supposedly battling Lyme disease. In addition to the changes in her appearance, the theory alleges that the title and artwork for “Avril’s” second album, Under My Skin, as well as the lyrics of songs like “My Happy Ending” and “Together”, are subliminal messaging. The original blog further suggests that Melissa feels guilt over “participating in this farce”, leading to the subliminal messaging.

“The death hoax saw increased prevalence in May 2017, when a high school student posted a Twitter thread alleging that Lavigne had died and been replaced in late 2003. The thread, which was retweeted a quarter of a million times, cited discrepancies in the singer’s face, fashion style, and handwriting as evidence of her death and replacement. The Twitter thread largely corresponds with the earlier “Avril Está Morta” conspiracy, with one major difference: this time, Under My Skin was created using pre-existing recordings of the real Lavigne.”

Does this album have subliminal messages? That don’t involve shopping at and experiencing the spunky value of JC Penney?

Oddly enough, this theory, and the Illuminati reptilian one are NOT the only Avril Lavigne death theories! (Geez, how many death theories can one Canadian pop superstar have???) In 2013, a separate death hoax alleged that Lavigne died in a snowboarding accident at Whistler Blackcomb ski resort.

The first time Lavigne addressed the rumors was in a November 2017 Facebook live stream Q&A, when a fan asked whether she was dead, to which Lavigne responded, “No, I’m not dead. I’m here.” (Pretty obvious answer, that.)

She went on to say that the theory was spawned because “people are just bored and need something to talk about”. The question was broached again in a November 2018 interview with Australia’s KIIS 106.5. When asked about the theory, the singer responded, “Some people think that I’m not the real me, which is so weird! Like, why would they even think that?” Radio hosts Kyle and Jackie O said that Lavigne “never actually flat out denied” that she had been replaced, and suggested that technological difficulties during the interview were a suspicious coincidence. In a 2019 interview with Entertainment Weekly, Lavigne addressed the theory directly, calling it a “dumb internet rumor” and saying that she was “flabbergasted that people bought into it”.

Now, oddly enough, I’ve met Avril Lavigne in person, back in 2003, when she was still allegedly the real Avril Lavigne. She was quite nice and chatty, and incredibly small and pixie-like. Seriously, she had to be roughly 4’11” in heels.

Given this, I’m certainly willing to step up and do my duty. Avril, or, the alleged Avril, has got a new album out, and will be touring nationwide soon. Given our close personal relationship cemented by about 15 minutes of shooting the bull outside behind The Mark after her show, I volunteer to vouch for the veracity of her claims to be the real Lavigne. We will meet again, at some classy joint like a Chuck E Cheese, and I will dutifully report on our meeting and if I believe this person is the true Avril, or if she is a reptilian shapeshifter imposter named Melissa who has stolen her identity and is using her fame to spread the word and gospel of Satan throughout the world.

I’ve sent an e-mail, a telegram, a candygram, and an Edible Arrangements fruit basket — heavy on the pineapple — to her and her people, with my invitation to meet with her to prove she is who she really says she is.

Of course, if they completely ignore me, that will be irrefutable proof that she is, in fact, an imposter!!!

I mean, after all, what other reason could they possibly have for turning down my incredibly logical, sane, and reasonable request?

You’d be moody too if you’d died and been replaced by a reptilian demon shapeshifter who used your name and image to push subliminal messages about Satan and Hot Topic rubber bracelets.