Home » Columns » Sean Leary » Will It Be Barca, Man U Or A Surprise For Griezmann?

Will It Be Barca, Man U Or A Surprise For Griezmann?

Will it be a Victory Royale for Barcelona or Manchester United in getting brilliant attacker, French World Cup winner and Fortnite fan Antoine Griezman? Or will another surprise team like Real Madrid end up dancing the L to Barca and Man U?

Ever since Griezmann announced last month on his Twitter that he would be leaving Atletico Madrid after five years playing in the Wanda, there’s been rampant speculation on where the perennial contender for the Ballon D’Or would end up next season. The early money was on Barcelona, which had been courting the Frenchman last summer, and first reports jumping out after Griezmann’s May announcement automatically had him heading to Camp Nou. 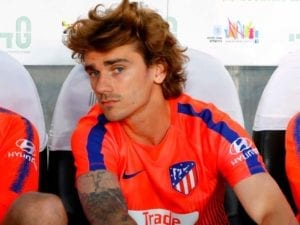 But in recent weeks, reports have soured on that union.

There have been multiple reports that some Barca officials and players, including star Lionel Messi, were irritated by Griezmann snubbing Barca’s overtures last summer to sign a new deal with Atleti. Many of them reportedly feel that Griezmann used Barca to get financial leverage to up the money in the deal, and are annoyed at the tongue-in-cheek video Griezmann made to announce his return to Atletico.

Griezmann fans couldn’t have been too surprised at the vid, an obvious parody of LeBron James’ “The Decision” debacle. Grizi has long been known to be an NBA fan, and has been known even longer to have a cheeky sense of humor. The fact that the video was even called “La Decision” should’ve been a tip-off to Griezmann’s sense of fun with the move.

But the more serious minded at Barca were not amused by the whimsical Griezmann’s joke on pop culture, and many soccer fans likewise felt that Griezmann was being too flip, even though the decision of a 27-year-old footballer over where to collect hundreds of millions of euros isn’t exactly a matter of war and peace and one could argue that Griezmann’s meta style parody was actually quite amusing in an Andy Kaufman-esque way. To Griezmann’s credit, he’s also acknowledged that perhaps his humor could’ve been taken the wrong way and he’s apologized for any hard feelings.

Nevertheless, it seemed to irk certain members of Barca, particularly superstar Lionel Messi, who has oft been seen as a quiet and serious sort. That could be seen in the tone of Messi’s comments last summer, in which he complimented the younger winger and seemed enthusiastic about him joining the team, vs. his terse responses to questions this spring about Griezmann in which he essentially said he had no opinion one way or the other.

Other Barca players like Ivan Rakitic, whose Croatia side lost to Griezmann’s France in last year’s World Cup, and Samuel Untiti, who played with Griezmann on the French team, have spoken glowingly of the attacker and said they would welcome him to Camp Nou, but other reports have Messi and other players seeking a return of the mercurial Neymar Jr. to Barca after his two-year stint at Paris St. Germain. 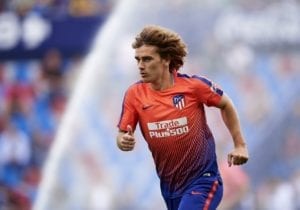 However, Barca’s move could be purely financial.

If Griezmann were to move to Camp Nou now, before season’s end, Barca would have to ante up a 200 million euro transfer fee to Atleti. If he waits until after the season, that number goes down to 120 euros. If they wait until July 1, the number reportedly goes down to 103 euros.

However, there could also be truth to the backlash to Griezmann’s moves last summer, as a recent unscientific poll taken showed that Barca fans had soured on the talented attacker.

While Barca seems to have cooled on Griezmann, Manchester United have heated up. The Premier League stalwarts have been looking for another attacker, and the talented Griezmann would fit in perfectly, particularly since one of Griezmann’s closest friends, Paul Pogba, is already a Red Devil, and Griezmann’s favorite player growing up, David Beckham, was a former Man U star. Could Griezmann, who wears the number 7 shirt in homage to Beckham, follow his idol to Britain?

Man U has the money and heritage to draw Griezmann, and a close tie in Pogba, but there is one glaring strike against them – they’re not eligible for Champions League play next season, and will the 28-year-old Griezmann, who has long desired to lift that trophy, be willing to wait yet another year and be happy vying for a Euro Cup, which he’s already won with Atleti?

Another option for Griezmann would be a trek across town to Real Madrid. Real’s French manager Zinedine Zidane is reportedly a fan of Grizi, and Zidane has gotten a glowing report on the 28-year-old from his French manager, Didier Deschamps, with whom Zidane won a World Cup with France in 1998. Although Real has reportedly signed fellow forward Eden Hazard, both Hazard and Griezmann are complementary players who have shifted to attacking midfield position and are known as being multidimensional and adept at all aspects on the pitch, and given their styles they could make for a potent scoring combination for Zidane. 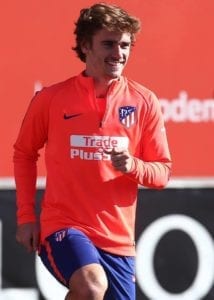 Two other reported options, Paris St. Germain and Manchester City, are allegedly out of the race. Griezmann’s contract would be too pricey for PSG unless they could offload Neymar’s massive deal, and Man City, facing potential sanctions on transfers, isn’t in a stable enough position to extend an offer.

Of course one option that’s been completely overlooked by the media would be for Griezmann to stay at Atletico. Reportedly there were three reasons Griezmann was looking to leave. The first was that his best friend (and the godfather to his daughter) Diego Godin couldn’t reach a deal with Atletico and is reportedly going to Inter, and that joining him out the door were two of Griezmann’s other closest friends on the team, Frenchmen Thomas Lamar and Lucas Hernandez. The second was that Griezmann wasn’t happy with Atleti’s play in the Champions Cup this year, dropping the second game 3-0 to Juventus on a Christiano Ronaldo hat trick, and losing the series 3-2 on aggregate, after jumping to a 2-0 lead. The third was that Griezmann reportedly wanted to play alongside Messi, widely seen as perhaps the greatest player of all time.

If Atleti could somehow reach an agreement with Godin and bring in more talent on the defensive side to play with Griezmann and allow him to stay up field in the attack, and with Messi’s dismissive comments this summer, it could open the door for Griezmann to return. It’s not completely unrealistic if you look at the comments being made by all parties. For while Barca is sending mixed signals to Griezmann and Man U and others have been mutedly enthusiastic (perhaps thinking the Griezmann to Barca transfer is a done deal), Atletico brass and players have been nothing but complimentary.

Atletico president Enrique Cerezo told Spanish broadcaster Onda Cero this week, “Griezmann has been with us for five years and done a splendid job. We have a good relationship. Nice, trustworthy. I hope wherever he goes he will be treated the same as he has been with us.”

And perhaps the seeds of a reunion?

Could “La Decision Part 2” be in the offing? We’ll see…

Sean Leary
Sean Leary is an author, director, artist, musician, producer and entrepreneur who has been writing professionally since debuting at age 11 in the pages of the Comics Buyers Guide. An honors graduate of the University of Southern California masters program, he has written over 50 books including the best-sellers The Arimathean, Every Number is Lucky to Someone and We Are All Characters.
See More Articles From Sean Leary
Tagged: Antoine GriezmannAtletico MadridBarcelonaChampions LeagueChristiano RonaldoDidier DeschampsEuro CupfootballFrench soccer teamJuventusLionel MessiManchester CityManchester UnitedNeymar Jr.Paris St. GermainPaul PogbaReal MadridSean LearysoccerThe Fevered PitchWorld CupZinedine Zidane