The Rotaract Club at Western Illinois University will co-sponsor a bowling competition, “Bowlio for Polio” from 2-4 p.m. Sunday, April. 24 at Diggers College Bowl in Macomb to raise money and awareness for polio eradication efforts.

Polio is a life-threatening disease that has largely been eradicated through vaccination. Vaccinations since the 1950’s have led to the eradication of some strains of polio, but the disease still exists in some areas. In some areas, the fight against Covid-19 actually contributed to a spike in the rates of polio. 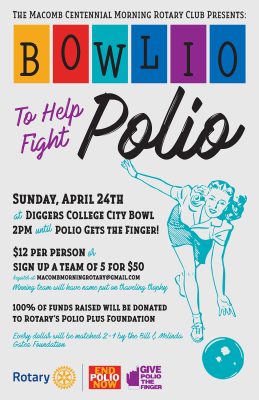 Jackie Miller, Youth Services Director of the Macomb Centennial Morning Rotary Club, shared that global resources and access were limited by Covid-19 efforts and sadly polio vaccination efforts across the world, especially in India, Pakistan and Afghanistan went backward. There were more than 20 million kids who didn’t get their polio vaccinations during that time.

Bowlio for Polio is a cooperative partnership between the WIU Rotaract Club and the two Rotary Clubs in Macomb. You can register as an individual for $12 per person, or sign up a team of five for $50. All of the funds raised will be donated to the Rotary’s Polio Plus Foundation, which is matched 2-1 by the Bill and Melinda Gates Foundation.

Registration can be completed by sending an email with individual or team names to macombmorningrotary@gmail.com.

“Rotaract brings people ages 18 and older together to exchange ideas with community leaders, develop professional skills and have fun while engaging in service,” said Anah Chamberlain, WIU Rotaract president. “Events like Bowlio for Polio not only allow students opportunities to engage with community leaders, it also allows us to make a difference in the world.”