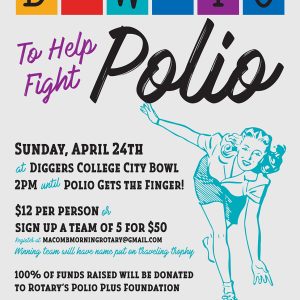 The Rotaract Club at Western Illinois University will co-sponsor a bowling competition, “Bowlio for Polio” from 2-4 p.m. Sunday, April. 24 at Diggers College Bowl in Macomb to raise money and awareness for polio eradication efforts. Polio is a life-threatening disease that has largely been eradicated through vaccination. Vaccinations since the 1950’s have led to the eradication of some strains of polio, but the disease still exists in some areas. In some areas, the fight against Covid-19 actually contributed to a spike in the rates of polio. Jackie Miller, Youth Services Director... Read More