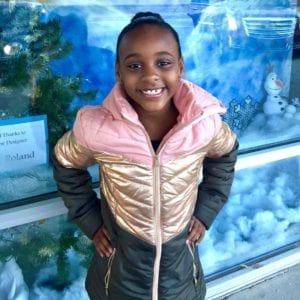 Rock Island – Yenework Munson has come a long way in her short life so far.

Just shy of 7, the Rock Island girl was adopted by Tony and Lindsey Munson from the African nation of Ethiopia in 2013. But she’s made an even bigger journey – within herself – in the past 18 months.

Lindsey feels that difference in Yene’s life has been provided mostly by the Center for Living Arts, at 220 19th St., and its owners, Dino and Tina Hayz. Yene (along with dozens of other area kids) were looking forward to putting on “High School Musical, Jr.,” with three separate casts, but the spring show has been put on hold due to the coronavirus crisis.

To help the Center while it’s shuttered, Lindsey is donating half the sales of two new books she wrote about her family – “Munson Marvels: Our Forever Family” and “Munson Marvels: My Peach Family” – to Dino and Tina.

“It is an uncertain time for so many families and small businesses right now,” Lindsey said recently, noting after she released her second self-published paperback (each sells for $12.99), the Center families received a painful e-mail from the Hayz’ about the uncertain future of the Center.

“A place that our daughter loves is unsure of their future because we don’t know how long our daily lives will be on hold and businesses will be closed,” she said. “It took my daughter many years to overcome her anxiety and to find an activity she truly loves.

“She found that love at the Center for Living Arts,” starting with her first production, “Aladdin” in late 2018. “Dino and Tina Hayz have made such an impact on our daughter and her life. They have helped her overcome her fears and anxiety. They helped her find a confidence that makes her shine not just on stage but in life. 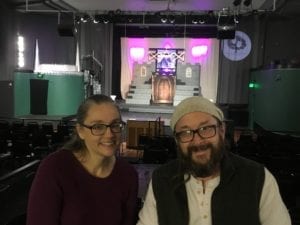 “The Center for Living Arts is like a second home to her…and for so many others,” Lindsey, who’s a special-education paraprofessional with the Rock Island school district, said. “It is a place where people come to express themselves, live creatively and empower themselves. It is a magical gem that we don’t want to lose in our community.”

“We want Dino and Tina to continue working their magic, spreading their creativity and inspiring our youth and our community,” she added.

In a March 22 e-mail, Dino wrote: “We are looking at a tremendous revenue loss in the next two months. This revenue secures rights for the summer shows, feeds our scholarship fund and pays for the lights, sound, sets, costumes and music tracks for the fall semester.

“Tina and I are going to seek outside emergency employment and would never ask you to support us personally, but we will, however, ask you to help us keep the Center from closing its doors permanently.”

“It is amazing how 14 years of work on a single path of offering arts to the area’s youth can become so precarious in just a short amount of time,” he wrote. “I am in awe, and certainly humbled, by the devastating power of these times.”

Lindsey’s books started as a way to help her two adopted kids (including Ethiopian son, Abi, who was about 1 when they got him in 2012) understand their new life and their place in it. The first was written about Abi, and the second about Yene.

“When we started our adoption journey, I decided that I wanted our life to be an open book,” Lindsey said. “I wanted to help educate others and show the world how life-changing the process has been for not just our kids but our family and community. 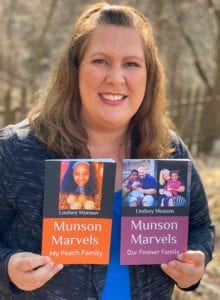 “On social media, I share pictures on a daily basis with our kids’ activities, successes, and family fun. Little did I know that publishing these books has made me feeling more vulnerable than I expected, even with me sharing as much as I do on social media,” she said. “It’s shocking how one moment in life can change things so drastically. Whether it is the moment of adopting our children or a moment like our world is experiencing now with the COVID-19 pandemic.

“The outcome of these moments are defined by how we handle them. We knew we would have challenges throughout our adoption journey, but we didn’t let that fear stop us from becoming a family and being happy. It was scary and hard at times, but we didn’t give up. We fought through our fears and challenges and will continue to do so for the rest of our lives. That’s what we are supposed to do for our children and our future.”

“Munson Marvels” feature stories inspired by real-life events, addressing on topics about adoption, identity, family matters, race and ethnicity. These books were written to help create awareness and educate adopted children, as well as family and friends about situations they may experience.

Into and out of Africa

Lindsey’s husband works for the city of Rock Island public works department, and they decided in 2011, after they could not have biological children, to adopt from Ethiopia.

“We really kind of fell in love with the culture of Ethiopia and some of their values they instill in the whole culture. and we had some friends that were adopting from there as well, so we thought that would be kind of cool to share an experience with them and have our kids grow up in the same area,” Lindsey said. “We knew the need there was so great — there are millions of children in Ethiopia.”

Yene and Abi – before school was closed – attend the Rock Island Center for Math and Science. Abi is a sports kid and plays baseball, and Yene was the opposite of outgoing Abi.

She used to be very shy, unwilling to take chances. “She had a lot of anxiety – I  actually used to call her my tumor, because when we were in public, she used to cling onto my leg the whole time and try to hide from people, because she was so scared, and especially scared of men,” Lindsey said.

They tried everything, from soccer to dance, but Yene didn’t enjoy anything until the Center, which was recommended by a friend whose girls were in it. “She was very hesitant at first, I had to walk her into every practice,” her mom said. “She’s now to the point where, ‘Mom, I’m good, you don’t need to walk me in.” 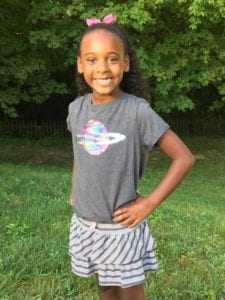 “She has really found this confidence about her, and she just absolutely loves going there,” Lindsey said. “Dino and Tina have been so good with her, and her anxiety and fears, and they’ve really brought out this side of her, which I always knew was there. Until she became part of their theater family, I didn’t know how much she would blossom and shine, and she really has.”

After “Aladdin,” Yene was in “Willy Wonka” in spring 2019, and “Frozen Jr.” this past fall, the first one she had lines and a solo. In a cast of 44, she was rehearsing for “High School Musical, Jr.” since January, and they were to start performances late this month. The Center canceled the first two weekends, and hope to still perform in mid-May for each cast, Lindsey said. Even if they do perform in May, it will just be for immediate family members, she said.

“I can see she walks around more confidently now, and she’s doing things more independently than what she ever did before,” Lindsey said. “That confidence just shines in her now. she’s much more outgoing; she’ll talk to people, where before she used to hide.”

A book about pride

In “My Peach Family” (a reference to how her parents look), all that matters to the daughter is that she wants to look like her adoptive family and friends. During a family dinner, her parents and brother try to help teach her how to feel proud of the way she looks and that everyone looks different.

Yene realizes that she doesn’t need to look like her adoptive family and friends to fit in and feel beautiful.

“We’re different, but at the same time, we’re the same as everybody else,” Lindsey said, noting Yene had wanted to dye her hair blonde, and look like her friends. “We talk about self-image and loving her brown skin and black hair,” she said.

“If I can help one or two people in their adoption journey, or if I can educate them about situations, racial situations in our family dynamic, then it’s worth it.”

“I can’t imagine if the one thing my daughter loves is taken away,” Lindsey said. “It would break my heart, not just for my daughter, but for the future of all of our kids. The arts are so important and I feel like there’s so many programs that already have been cut for the arts, we don’t want to lose a gem like that in our community.”

“We have a wonderful community of families who are bending over backwards with their support, such as Lindsey Munson,” Dino Hayz said by e-mail. “She is an amazingly talented lady with a heart of gold. You can see that her sweet, talented daughter, Yenework, has an incredible role model to follow in her mother. We love that family so much!

He said they have applied for small business grants, and he and his wife recently started working for a company assembling face shields for frontline medical professionals.

Mindy and Todd Volkert, of Milan, also generously donated $400 to the Center for Living Arts, and their youngest daughter, Alaina, has made cupcakes, selling them and donating profits to the Center.

“Families from our entire history are sending in donations to help keep the place afloat during this dark time,” Dino said. “We are appreciative beyond words. Right now, we are trying to keep things low-key in regards to fundraising. Many families are feeling the pinch during this time.”

All donations are going towards the monthly recurring expenses of running a theater. The Hayz’ also meet weekly with all their casts through Zoom, and send choreography videos via email to help them practice at home.

“We see this as just an intermission,” Dino said.

To donate to the organization, visit centerforlivingarts.org/pay-for-classes.