Davenport, IOWA — In one of the most incendiary, perverse, and controversial masterpieces of performance art over at least the past eight days on the Quad-Cities social isolation scene, Khalil Hacker, a.k.a. Khalil Antonio, a.k.a. “you know, Khalil, from Circa,” ate donuts live on Facebook Monday night. 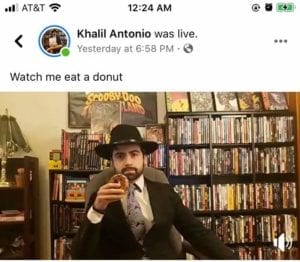 The provocative and unsettling live feed began at 7 p.m. when Hacker, dressed mysteriously in a rakish black fedora, black suitcoat, white shirt and gray tie, but wearing no pants, stared into the camera in defiant fashion, brandished an unnamed silver sleeve, dispensed what appeared to be some sort of capsule, and swallowed it utilizing what appeared to be a hydroflask.

Immediately the internet exploded with speculation that Hacker’s latest living artwork was a scathing manifesto about the capitalistic greed of Big Pharma, crossed with a playful jab at VSCO girls. But little did his fevered fans know that so much more was to come, breeding a hotbed of even more speculation and dissection of this bleedingly vital social statement by one of the area’s most occluded and peripheral social artisans.

In sexual and violent fashion, Hacker ripped two fresh donuts from an unseen box, and viewers could only gape in horror as one of the pastries attempted to save its partner from an unholy fate, clinging desperately to its frostinged bottom. With a savage, sardonic grin, Hacker rendered the two donuts asunder, casting the defiant bottom baked good aside like Yahweh chucking Lucifer from the heavens to a fiery eternal fate.

He then stared into the camera with lascivious resolve and in one of the most explosive and vitriolic, not to mention deliriously delicious, statements made in the 7 to 7:05 p.m. time period Monday evening, he wantonly bit into the donut, devouring it in front of a shocked audience of tens. 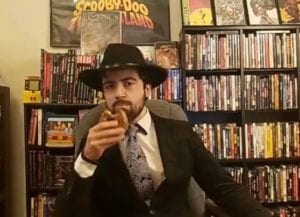 The crowd, mesmerized, horrified, electrified and suddenly hungry, continued to watch in lurid spectacle as Hacker devoured the rounded pastry. And then another.  And then, terrifyingly enough…

“This is clearly Mr. Hacker’s most insanely genius work yet, a cogent commentary on the ephemeral nature of existence in a time of pandemic and fear,” the noted artist and critic known only as Todd said in a post from his Maryland home, before signing off to scream at the mean ocean outside.

Local theater critic Tristan Tapscott could only add, “Chilling… I need therapy now… I can’t even… hey, is Donuts and More still open?”

Not all were thrilled, however, as tiny warring factions of the lactose intolerant and gluten repellent immediately sought to cancel Mr. Hacker over his insensitivity, and the hashtag “howdareyouyouheartlessbastardKhalilHacker” began to nowhere close to trend after the live feed. 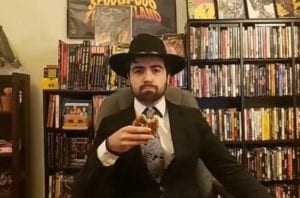 The turgid commentary laying bare in the wake of such artistic devastation likewise bespoke of the shock, awe, and wonder over Hacker’s latest masterstroke.

The curious and inquisitive Kim Bogus immediately offered the following: “I have questions! What kind of donut? How old was it, why was it sticking to other donut (sic)? Where did you get the donut — is it from a bakery or hostess? You really need commentary!”

The Artist replied, “1. First two were chocolate chip, third was a snowball! 2. Like maybe a day or two? 3. Donuts and More in Davenport, Iowa!”

Caitlin Sodeman added, “I paused my show on Netflix to watch this.”

When reached for comment in regard to the pausing, Joe Exotic stated, “That b**ch Carole Baskin probably put Khalil up to this!” 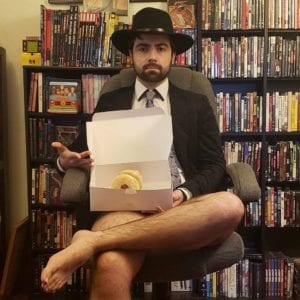 Awestruck, fellow witness to majesty Savannah Bay could only utter, or, well, type, “This is everything.”

It was everything. And more.

The dates and times of future live feeds — literal and figurative — are unknown as of now. But one thing is for certain: After this evening, after the seismic volcano of societal and existential artistic brilliance displayed by Khalil this night, none of us will ever be the same.