Few people outside the small local comedy community realized that Andrew King moved away from the Quad-Cities this month.

Few people outside the small local comedy community know who Andrew King is. 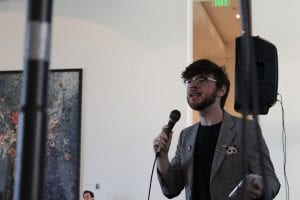 But the departure of the soon-to-be-30-year-old King, who finally made a long covid-postponed move to Providence, R.I. in late June, is a real creative diminishment to the local arts scene.

King was one of the most original characters on the Quad-Cities entertainment scene. He brought a unique voice, persona and artistic vision to the local stage. With an asymmetrical poof of hair, bookish glasses, and a predilection to wearing vintage sportscoats adorned with funky little buttons, he looked like the geeky, pagan offspring of a gene melding of Woody Allen, Elvis Costello and another Quad-Cities original, Scott Morschhauser.

And like Morschhauser, who blazed his own singular path across local entertainment with bands like The Kabalas and The Metrolites, before completely taking himself off the map and retiring from performance in 2009, King is going to be missed for his ideas and energy that lent an offbeat patina to the mural of local entertainment.

King arrived on the local scene about a decade ago, with the Blacklist Comedy Troupe, but after realizing the loud stomp of raucous improv didn’t jibe with the silence and clever thought bubbles of his more jazzy vocal beats, he transitioned to stand-up, and began to develop his own voice and persona.

The After Hour logo, by local artist Johnnie Cluney

Influenced by an eclectic mix of comics and TV shows, from Garry Shandling to “The Dick Cavett Show” to Tom Snyder and Steve Allen, with a little bit of Hawkeye from “M.A.S.H.” thrown in, King found his niche with the inception of his live talk shows, beginning with Rozz Talk, at Rock Island’s Rozz Tox.

It was a pretty simple formula – King on stage, much like any other live talk show of the past or present, most notably Tom Snyder’s “Tomorrow,” with one guest, having a conversation. It’s a formula which had been done before – I had done it, Kai Swanson had done it, Don Wooten had done it – but one which hadn’t been done in a while, and King brought his own unique persona to the equation to make it new again.

He really hit his stride with the offshoot project of that, The After Hour, which had its home at the Circa ’21 Speakeasy, and was, for a brief time, a companion show with my own sketch comedy at the Speakeasy, “Rock City Live.” The After Hour was a brilliant creation. It was, in all 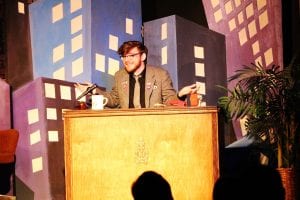 ways, a live talk show no different than those of Kimmel or Fallon, with its own set, desk, and guests, from comedians to musicians. Whereas some people, again, including yours truly, had done similar things in the past, no one did it to this extent, with this attention to detail and setting. It was fantastic to see, and one of the greatest things to hit the local arts scene over the last decade, in my opinion. What made it all the more intriguing to me was that King was such a huge fan of the masterpiece, “The Larry Sanders Show,” and so much of his inspiration and persona was influenced by that brilliant meta-comedy. As with all of his work, it added an extra dimension of smarts and cleverness to his comedy and his creation. 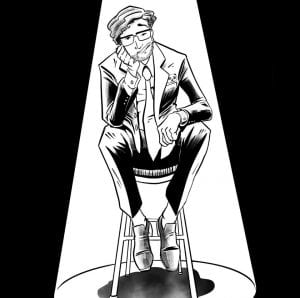 The same could be said for his other signature project, The Bix Beiderbomb Open Mic Night, which had much in common with many other open mic nights past and present, but, again, with King emceeing and handling the odd and quirky promotion of it, took on a distinct life and spin of its own.

And that’s what I’ll miss about Andrew King being a part of the Quad-Cities arts scene. Like all great artists, he could take something that had been done before, that could’ve been banal or mundane, and instead gave it a twist, a weird new direction, something that was distinct to his own vision, that made it new and interesting.

I have no doubt King is going to succeed in the Providence, and, ultimately, Boston, environment, which will offer him a much larger and urbane audience for his work. The arcane references, inside jokes and little details, the influences and sparks, will resonate with a bigger crowd in a bigger market. I’m happy for him, I’ll be glad to see him succeed.

And, I’ll be glad to see him periodically return, just for a visit or a performance, to the area.

But it’s also sad to watch him go. It’s unfortunate for the local arts scene to see a funny and active creative mind leave the area. He’ll be missed.

Best of luck, my friend.

You may now flip.