A prestigious national arts award is back under the baton of a Quad-Cities conductor. 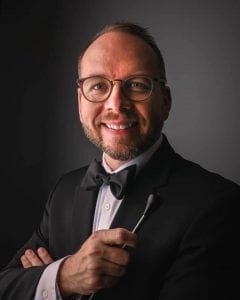 Nicolas Propes has led the band since 2016.

Nicolas Propes of LeClaire, who leads the Big River Brass Band, was announced this week as winner of the American Prize in conducting band/wind ensemble, community/schools division for 2019-20.

“I was very honored to be selected,” Propes, a 40-year-old native of Ames, Iowa, said Friday. He applied last summer with a resume and videos of him leading the band. A whole host of judges from across the country review the applications and narrow them down to semi-finalists and finalists, he said.

“It’s actually been quite a process,” he said. “It’s been about a year process to get through all the rounds, to finally be named.”

The American Prize calls itself the “most comprehensive series of contests in the classical arts,” and offers awards based on submitted recordings. There is no live competition.

The American Prize is a series of nonprofit national competitions in the performing arts, providing cash awards, professional adjudication and regional, national and international recognition for the best recorded performances by ensembles and individuals each year in the U.S. at the professional, college/university, church, community and secondary school levels.

Administered by Hat City Music Theater, Inc., a nonprofit organization based in Danbury, Conn., the American Prize was founded in 2009 and is awarded annually.

“One of their founding principles is, there is a lot of excellent art and performances happening in the country that don’t get recognized because maybe other organizations are a little too broad,” Propes said. “It’s difficult to compete in other awards when you’re up against organizations and groups that are not that similar to yours.”

He earned his bachelor’s degree in music education from the University of Iowa in 2002 and his master’s in conducting from the American Band College of Sam Houston State University in 2015. Propes began directing school bands in 2003 and established himself as a qualified and respected teacher. His ensembles received top ratings at festivals and contests, but more importantly, he inspired countless students to create music through their school years, many of whom became life-long appreciators of music. 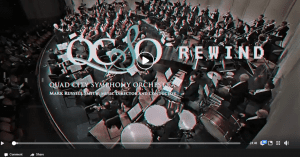 Propes was band director at Pleasant Valley High School for 13 years and in 2016, he got the job conducting the Big River Brass Band, an adult community ensemble, and works with students at every opportunity including ensemble/sectional coaching, guest conducting, and one-on-one conducting lessons.

The BRBB is a British-style band (including percussion) consisting of members from the Quad-Cities area, ranging in age from 18 to their mid-70s. “That’s part of the joy of being musician, is that it’s a lifelong activity,” Propes said.

The band typically performs in Iowa and Illinois through the summer with a holiday concert in December. This year’s performances (including the St. Paul’s Lutheran Church Davenport holiday program) have all been canceled due to the coronavirus.

“I knew some of the founding members and in 2016, they were looking for a new conductor,” Propes said. “They knew that I was a conductor and looking for a position.”

“Apparently, it went well because here we are, four years later and I’m still going after it,” he said.

In 2016, he also went to work for the Quad City Symphony Orchestra, where he was orchestra librarian and then two years as digital media assistant because of interest in photography and videography.

After the QCSO season was canceled in mid-March because of coronavirus, Propes put together several episodes (“Rewind”) of past concerts he recorded, that people could watch on the symphony website, Facebook page or YouTube channel.

“The idea was, we have video archives of absolutely world-class, fantastic performances and for all these patrons – and the musicians too – who were severely missing the Quad City Symphony, had tickets for the last few performances, we wanted to keep everybody in mind and connected with the Quad City Symphony and remind them this is a world-class organization,” he said.

“We went back through the last three years of performances and picked some of our favorite and best performances,” Propes said, “and made those into longer-form videos we shared once a week into the summer months, as a way to keep our fans and our musicians engaged and in love with the symphony.”

“It was a challenge, but what I loved about it was, it gave me a way to really get in-depth with these performances,” he said. “I was working for an entire week to put together those videos. Just re-listening and re-experiencing the beauty these performances were, for the entire week, it was a special project – to be able to get that intimate with these wonderful performances.”

Some are still available to see online, but will be taken down soon.

Propes grew up in Ames playing piano (from age 5), then violin, cello, and trombone through high school, then tuba into college and beyond. 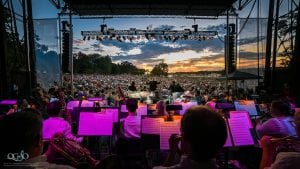 He played for the University of Iowa marching band, where he met his wife Elly (she played sousaphone). “Conducting goes hand in hand with music education,” he said. “Education is something that I am incredibly passionate about – music education, but public education in general. Which is a big reason why I’m back in teaching.”

Propes and his wife have a 10-year-old son, who plays piano.

This school year, the conductor is back at PV teaching band at the junior high and elementary schools. “This current situation with Covid is a challenging time for teachers,” Propes said. “I’ve come back to help the teachers here doing band and staying safe at the same time. It’s great to be able to bring my years of experience back to the classroom, where it’s needed the most.”

Does he prefer leading students versus adults in band?

“Each group and age level is so different; they have their different levels of talent,” Propes said. “They come with different challenges and levels of successes. Clearly, the Big River Brass Band gives me a chance to flex the musicality and play some really challenging music, because those musicians are fantastic.

“At the same time, getting a young person excited about music is its own reward,” he said. “They are excited and that’s addictive.”

Currently made up of 40 musicians, the BRBB has played in Aledo, Geneseo, Rock Island, Moline, Bettendorf, and at the Festival of Trees in Davenport. The BRBB plays in the style of European brass bands and draws literature from classic brass band, jazz arrangements for brass band, and continues to search for new music.

Even though winning the American Prize is a satisfying balm during uncertain times and loss, Propes wishes he could be back leading the BRBB.

“It might make it a little harder, because it just reminds me that we’re not doing it,” he said. “I’m very honored to have won it,  but at the same time, it’s just a reminder I don’t know when I’m going to be back on the podium again, you know? Certainly, not before 2021.”

Propes wants to share the honor with the band members.

“We’ve made great progress the last four years with that ensemble,” he said. “I just want to keep pushing the group and making more fantastic music with them, and it’s a little bit of a reminder that I can’t. It’s bittersweet.”

The Big River Brass Band and Quad City Wind Ensemble will be taking part again the Dunedin Music Society‘s Virtual Band Festival this Saturday at 1 p.m. Past performances by bands will be shown at dunedinmusicsociety.org/live.