There’s a heartfelt, inspiring story both on the Playcrafters stage and off in the wacky, wonderful “You Can’t Take It With You,” a classic American comedy by Moss Hart and George S. Kaufman. 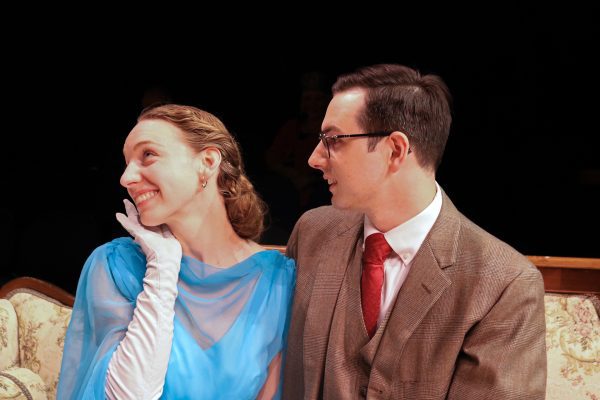 Due to factors beyond the control of director Vicki Deusinger and the great 18-member cast (I think the most I’ve seen in any one show at the Barn Theatre in Moline), the madcap production will be presented just one weekend — Thursday, Nov. 18th through Sunday, Nov. 21st. It should not be missed, for several reasons.

Winner of the 1937 Pulitzer for drama, and adapted by Frank Capra for the screen in 1938 (winning Oscars for Best Picture and Best Director), “You Can’t Take It With You” premiered on Broadway on my birthday (27 years before I was born) in 1936 and has been one of the top-10 produced school plays every year, since rights became available. Just last month, it was done at Davenport’s Assumption High School.

That may be partly due to the fact that the main Sycamore family seems adorably mad and eccentric – flighty, rebellious, idealistic and in thrall to their own desires. While those are often traits of youth, in Kaufman and Hart’s setting, these emotions are held tightly by people of any age.

There’s fireworks-making in the basement, ballet lessons, “Ode to Joy” on the xylophone, novel-writing, pamphlet-printing, and storing 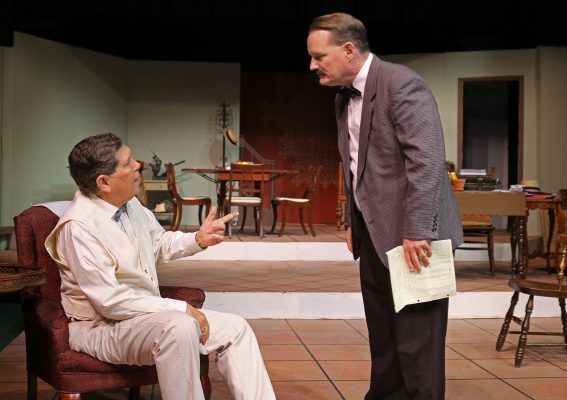 Steve Trainor, left, as Martin Vanderhof, argues with the IRS agent, played by Kevin Keck, about the merits of paying taxes.

letters from the IRS in the freezer. But, before long, the audience realizes if this family is crazy, the rest of the world is madder.

In contrast to these delightful, carefree folks are the apparently unhappy, conservative Kirbys. Tony Kirby, the dashing young son of well-to-do but uptight parents, falls in love with the more down-to-earth Alice Sycamore and brings his parents to dine at the Sycamore home…on the wrong evening. The clash between the two families’ lifestyles convinces Alice that marriage with Tony will never work. A forgiving, generous Tony, who believes the Sycamores are right and his own people wrong, is determined not to give her up.

Alice and Tony are clearly meant for each other, and seem the most level-headed, logical characters in this theatrical version of a loony bin. In Playcrafters’ version, the actors originally cast in the lead roles dropped out for personal reasons, and Kady Patterson and Andrew Derbyshire replaced them, first picking up scripts Nov. 2. I was told they had their parts memorized in four days, and I saw their dress rehearsal Nov. 15. They were flawless, assured, and incredible.

Patterson in her program bio said she agreed to step in to her first show at Playcrafters (she was recently Mrs. White in Richmond Hill’s “Clue”) because “The show must go on!!” Amazingly, this is Derbyshire’s very first stage role altogether. 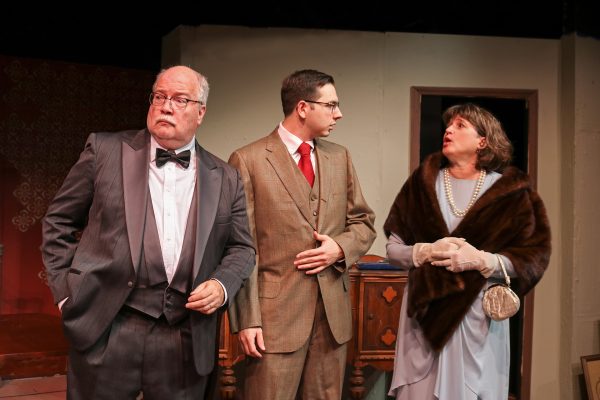 The Kirby family in “You Can’t Take It With You” — Anthony (left), played by Scott Tunnicliff, Tony, by Andrew Derbyshire, and Miriam, by Melita Tunnicliff.

They look very natural together, with easy chemistry, and their first date scene – coming home after the ballet and dancing to a record – is utterly romantic and magical. Patterson perfectly captures the thrill and ecstasy of new love, nearly floating on air and smiling with irrepressible glee.

It’s fitting that she fit as a replacement here, since Patterson also looks like she could literally be the sister of Abby Bastian, who plays Alice’s super cute sister, Essie, and just about dances solo (intentionally not so gracefully) in each scene she is in. Bastian is consistently bouncy and perky, and also often has a smile on her face. Doesn’t this family realize they’re living in the Great Depression?

The moral backbone (and the title) of the play comes from Grandpa Martin Vanderhof, expertly played with both a world-weariness and attractive, whimsical lightness by Steve Trainor, who returns to the Playcrafters stage after a 42-year absence.

Grandpa defiantly marches to his own drummer – giving up work 35 years ago, yet he owes 24 years of back income taxes (mainly from his property), and receives many letters from the government demanding payment. One of many very funny scenes with Trainor is when he gets a visit from an IRS agent (Kevin Keck), and they debate the merits of paying taxes to the government (an issue that feels timeless). 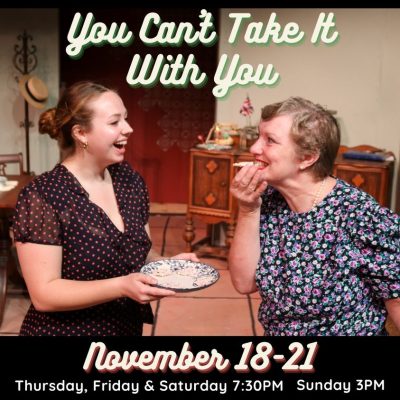 “You Can’t Take It With You” at Playcrafters features Abby Bastian, left, and Kathy Graham.

Grandpa asks what the government does with his money – what does he get back? The agent replies, the government gives “everything,” including protecting you from foreign invasion (but what happens when the enemy is already here?) Trainor chuckles that he wouldn’t mind paying if it was something sensible, and suggests $75.

Money is also a major theme later on in the culture clash between the very different Kirby and Sycamore families. The moment just before intermission is a true classic – when Tony’s parents, ideally embodied by real-life spouses Scott and Melita Tunnicliff, show up for dinner at the Sycamores at peak kooky chaos (and….scene!).

Mr. Kirby is actually an understanding, sympathetic company boss, with chronic indigestion, and his wife (who believes in spiritualism) gets into an argument with him as they play a harmless word game with the Sycamores.

Tony acts out his own rebellion, saying the company lifestyle is not for him, and he pleads for his father’s blessing, noting he found letters that Mr. Kirby had written to his father, expressing desires to be a trapeze artist and later a saxophone player, and that Mr. Kirby still has a saxophone in his closet. Grandpa tells Mr. Kirby that he should get to enjoy his life and riches now while he can, pointing out, “you can’t take it with you.” Tony agrees with this, deciding to leave the family business to do something he wants to do, and after much arguing, Mr. Kirby finally gives in.

For some insane reasons, a drunk actress (Vera Fornander) and domineering Russian duchess (Carla Stevens) add more colorful flamboyance to the proceedings, but don’t really further the plot. “You Can’t Take It With You” is supremely entertaining always, and has a huge heart and soul at its core, reinforcing the principle that you only have one life, which should be lived to the fullest, by doing whatever makes you happy.

Trainor noted rightly to me that it asks why people work so hard at things they don’t enjoy. “The show has a solution to the workaholism 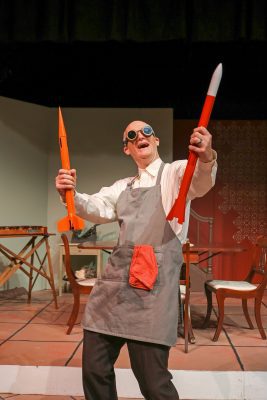 attitude and how to handle the rough times,” he said. “What do we want out of life….and is hard work and money the only answer to get what you want?”

The other theme is that there’s no real formula to whom you love, so follow your own heart — not your family’s.

Kudos also to a sizable crew that built and manages a bulging, complex three-level set of the Sycamore home. There is a lot to take in here and enjoy.

On Thursday, Friday, and Saturday doors open at 6:30 p.m., with the show beginning at 7:30 p.m. Sundays are 3 p.m. matinees with the doors opening at 2. Reservations can be made by calling the Playcrafters box office at 309-762-0330 or by visiting playcrafters.com. General admission is $15 and military and senior admission is $13.

All audience members will be required to wear a mask, regardless of vaccination status. All actors are wearing clear masks.