On Friday, you can gaze up at the summer night sky and watch the stars in wonder. 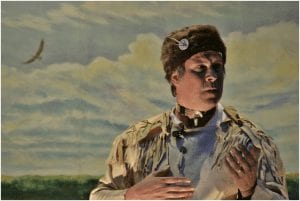 Fox is an author and storyteller of Cherokee heritage. There will be drumming songs and a chance to sing long. Patrons are encouraged to bring a lawn chair, bring a snack, and bring a friend. The evening is sponsored by the Twinflower Inn and Fox Tales International. Free will- donations will be collected to offset expenses.

Fox will be sharing stories from his Cherokee ancestors as well as a few of the funnier coyote stories. The audience will be invited to sing along with Native songs. Fox says, “Storytelling in the Native American tradition invites the entire community to be a part of the story. Native storytelling is very inclusive. The Cherokee also have a very different perspective on the star and their origins.”

“We all know about the Milky Way, The Pleiades, and Orion the Hunter, the stories from the Greco-Roman tradition. Here is one of many ways in which our stories are different, reflective of our culture: whereas the idea of a milky path is somewhat universal among other cultures, Native people did not milk cows, so for the Cherokee the Milky Way is a path of corn meal across the sky,” he says.

There will be stories of eagles, bears, frogs and hummingbirds, stories of shooting stars, the moon, and other astronomical phenomenon. They have chosen a night in a town with very little light pollution, so everyone can best view the stars of which they will speak.

And come early, since the Filling Station will be serving their usual Friday night dinner starting at 5 p.m. For more information, call 309-696-1017.