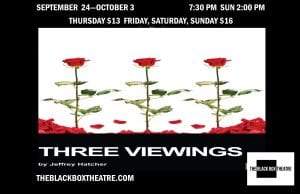 “Looking for pieces that allow us to follow safety protocols for both our actors and audience has taken some thinking and once again, Jeffrey Hatcher has provided the answer,” said Adams. “Like ‘Murderers’ this is a tryptic of monologues and they are both hilarious and touching.

The monologues are set in a Midwestern funeral parlor over a three-day Christmas weekend. Critics said “Hatcher’s three brief, intermissionless playlets have the merits and liabilities of that style of American short-story writing which started with O. Henry and, from the careful set-up to the ironic payoff, has never really ended.” —NY Post. “Nowadays it is rare to encounter a genuine writer in the theater—someone, that is, who thinks about such things as character and structure, someone who has a genuine feel for language. So when such a thing comes along, it’s exciting…THREE VIEWINGS is the genuine article…Hatcher’s voice is one I want to hear again soon.” —NY Daily News.

September 24 to October 3. Thursday, Friday, Saturday at 7:30 pm and Sunday at 2:00 pm. Tickets are $13 on Thursdays. Doors open 15 minutes before curtain, temperatures taken at the door, social distancing seating and all patrons must wear a mask.

The Black Box Theatre is located at 1623 5th Avenue, downtown Moline. Tickets are available at theblackboxtheatre.com

Sean Leary
Sean Leary is an author, director, artist, musician, producer and entrepreneur who has been writing professionally since debuting at age 11 in the pages of the Comics Buyers Guide. An honors graduate of the University of Southern California masters program, he has written over 50 books including the best-sellers The Arimathean, Every Number is Lucky to Someone and We Are All Characters.
See More Articles From Sean Leary
Advertisement
Tagged: Black Box TheatreJames Driscollkayla jo pulliamLora AdamsMolinePatti Flahertyquadcities performancesQuadCities theaterthree viewings