Home › Cities › Silvis › May The 4th Be With You: ALL ‘Star Wars’ Films Ranked! What’s Number One?

Star Wars is the most popular space saga and most exciting adventure film franchise in the world. It captured the hearts and minds of all ages and created an entire community of its own.

And, since partnering with Disney, the force and its popularity has grown and become an even hotter brand. I admittedly can’t call myself a major Star Wars geek but I do admire the films and their rock star entertainment value. I love getting lost in their world and as today is Star Wars Day, I put on the Disney +documentary Empire of Dreams (highly recommended) and decided to rank the existing 11 films.

If any film had all the promise in the world it was this! The origin story of Darth Vader? Are you kidding me? The potential and possibilities were endless. What happened?! The one singular sequence that saved this one was the pod races. Those made it just a disappointment instead of an utter disappointment.

I hesitated to rank this higher than Phantom Menace but here we are. I am still questioning it? Honestly, it might be worse? I think what makes it better is that the fact that I wasn’t expecting as much so the disappointment level was different.

Ok, it’s clear I just didn’t like the prequels. And that’s fine. BUT Ian McDiarmid’s performance as Palpatine is GOLDEN and so dynamic. I will say this definitely left a better taste in my mouth than either Phantom Menace or Clones.

I liked it. I really liked it. Ron Howard did a fine, fine job and I was invested and it checked all the boxes (maybe too many?). I wasn’t overwhelmed, I wasn’t underwhelmed.. I was just whelmed. 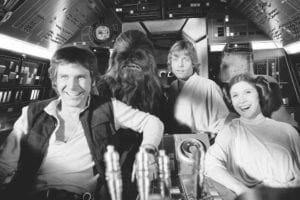 This a great movie and probably deserves a higher ranking… but.. it just didn’t stay  with me?

While it pales in comparison with the rest of the original trilogy, it’s Luke’s journey that really sold  me on this one. What a fascinating way to end this character’s crazy adventure.

I really, really loved it. I was very moved, excited, inspired…There are some obvious character issues but overall, I really loved how J.J. wrapped it all up. I really don’t mind when a filmmaker gives the audiences what they want and while I know that’s been heavily criticized, I was down for seeing old friends and iconic images.

How could you not feel giddy about this one? Daisy Ridley is so, so charming; Harrison Ford is flying the Millennium Falcon; Adam Driver emerges as the most incredibly    fascinating and troubled villain in the franchise’s history; that third act light-saber battle        is pretty bomb… it lived up to its hype!

I know, I know… Star Wars fan will kill for this ranking but in the capable hands of Rian Johnson, The Last Jedi is a well crafted, witty and epic blockbuster. A truly stellar film.         Full Stop.

Nothing beats the first time…

The saga is far from over. It was just announced today that Academy Award winner Taiki Waititi will co-write and direct a new film for theatrical release. The rankings will change over time, yes, but one thing is for certain: there will never be anything quite like Star Wars.

May the 4th be with you…