Laura Fraembs’ Legacy Is One Of Hard Work And Journalistic Integrity

Laura Fraembs wasn’t well-known to the general public outside of local media circles.

She wasn’t on TV, or radio, and her picture rarely appeared in the newspapers for which she’d worked since 1981, The Dispatch and Rock Island Argus, and then the Quad City Times.

In fact, she hated attention and shied away from the spotlight.

But Fraembs’ legacy of integrity and veracity, absolutely spartan work ethic, and dedication to the principles of journalism, made her a true star of local media and an irreplaceable part of the newspapers. 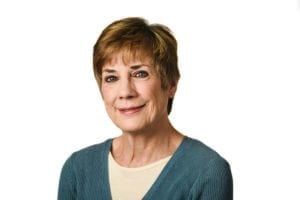 I was very sad to hear about her passing away way-too-early at age 60 last week after injuries sustained from a fall in her home. Laura and I worked together during the entire time I was at the Rock Island Argus and Dispatch, and then again at the Times after the papers merged, and she was one of my direct editors, along with Joe Payne, when I was with the Illinois-side papers.

Laura was a terrific editor, one of the hardest workers I’ve ever seen and someone who was very direct, pragmatic, and did not tolerate BS. I always respected and appreciated that about her. In an era of the often phony, in a business increasingly strewn with artifice and compromise, she was always direct, always to the point, always genuine. You always knew where you stood with her, and that was something I loved and admired about her.

We didn’t always agree, since I was, and am, very hard-headed, stubborn, creatively passionate and oftentimes a gigantic pain in the ass. But as was often the case, that conflict produced excellent work. When we clashed, it was because we both wanted the best, both wanted to be the best, but had different opinions on how to get there. The answer was usually somewhere in the mix of the two, and I appreciated the fact that she saw things differently from me, stood her ground with equal stubbornness, and helped me to see that perspective and strive to achieve the greatest goal. I know many times Joe and Laura had to deal with me being a frustrating, obdurate, rebellious, titanic SOB, and many times, as much as I stubbornly didn’t want to admit it, they were right. And I appreciate that. Their passionate devotion to us doing our best made me a better writer, reporter and person.

At all times, Laura was fiercely independent, amazingly strong, devoted, absolutely relentless in her work ethic and unabashedly dedicated to doing her best. She was never one of the “local media celebrities,” but she was far more valuable, she was one of the people who made sure the papers adhered to a code of quality and ethics that maintained a vital veracity.

She was also incredibly funny, snarky, sarcastic, and fun to talk to, especially when shooting the bull outside during breaks. She had a terrific laugh, and a fantastic way of cutting through the crap to deliver a great sarcastic line, which was usually well on target in terms of its subject.

There is no replacing a Laura Fraembs. There is no replacing someone who constantly worked the longest hours of anyone there, who always went that proverbial extra mile. With her it wasn’t a cliche. It was legit. She was the one who would stick around to get it right, to make sure it was done to the best of her ability, to make sure it was at its best before it went out to the readers. It didn’t matter how long she’d already been there, or what she had going on after work, that wasn’t just her job, it was her vocation, and that was vital to her. It was inspiring to see, and not something you see often. I admired and respected the hell out of her for it.

The newsroom will have a massive void in her departure. You don’t just find another Laura Fraembs.

The lives of her friends, family, and longtime boyfriend, Kurt, who was the perfect lighthearted comedic complement to Laura, will also feel her departure heavily. My condolences go out to them. She’ll live on in the warm and kind memories we all have of her, as well as the incredible integrity and quality she brought to local journalism.

There will never be another Laura Fraembs. She will most definitely be missed.