Fran Riley, one of the most beloved members of the local media and a longtime favorite at KWQC-TV6, passed away Friday after a battle with prostate cancer. 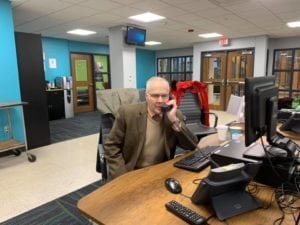 Riley had been retired from the local NBC affiliate since November, after a  25-year stint there, capping a 46-year career in broadcasting. Riley was especially admired and loved for his Fran Riley Features, which told stories about interesting area people and places in his singularly beguiling way. He was also a bright and sunny presence around the newsroom, always quick with a smile and hello and a kind word.

The Boston-born-and-raised Riley graduated with honors from Emerson College and worked in radio and TV as a sportscaster before moving to the Quad-Cities to begin with KWQC in 1978. Riley won a number of awards during his tenure, but was best known for his eye for a good story, his amiable personality and his warm on screen persona. After he retired, the station renamed their news conference room in his honor. 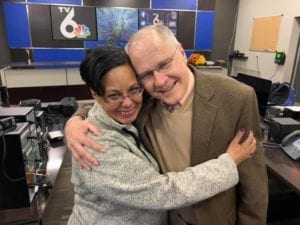 Theresa Bryant, his co-worker and friend at KWQC-TV6 posted today, “You would be hard pressed to find a kinder, nicer, more decent human being than Fran Riley. He shared his vast and amazing talent with us for 25 years, but also became a dear friend and family member. Those of us who got to work with him consider him a giant of journalism. Those who were interviewed by him got to know the kind and inquisitive reporter. He was a true friend to all and never knew a stranger. Condolences to his dear wife, Marilyn, and his wonderful family and friends.”

“Fran’s ability to inspire others through his work – and to treat everyone around him with kindness and respect – is part of his KWQC TV6 legacy,” said KWQC Vice President/General Manager Sue Ramsett in the station’s story about Riley’s passing.

“He sat in our newsroom and witnessed light moments, victories, heartaches, and new challenges every day, but through it all, Fran bore witness to kindness, patience and humility,” KWQC News Director Stephanie Hedrick added in the same story.

Erik Maitland, another friend and longtime co-worker, posted on his Facebook page, “The Kingdom of Heaven has received a Good and Faithful servant. And, we at KWQC have all LOST a wonderful friend.”

Fran leaves behind his wife, Marilyn-Korthaus Riley and an adult daughter, Andrea.

His daughter, Andrea Aleksiejczyk, posted on Fran’s Facebook page, “Where to start…first thank you to everyone who has reached out to me. I never thought this day would come this soon. My Dad was the light of my life and this community. He took on a role in my life that he never had to take. Adopted me and treated me as his own. He was my one and only Dad. It kills me that I wasn’t at his side when it occurred. However, I cherish the beautiful conversation we had yesterday and the lifetime of memories that we shared. All the books he read to me and his beloved grandson Sid, the games we played, the co-pilot mission control car rides, and pizza parties. He was my Davie, chicken legs, and friend. It has not sunk in yet and not sure it ever will. I’m glad the last words I uttered to that beautiful soul that touched so many lives were, “I love you.” Dad, Sid and I love you to the moon and back. I’d give anything for one more pizza party. Watch over us, and give love to all of the beautiful people that I know you are with tonight.”

Funeral arrangements are being handled by Halligan McCabe Funeral Home, click here to leave a message for his family.