Sure, some of Taylor Swift’s exes might call her Satan. But what if they’re partially right?

What if the pop singer isn’t Satan itself, but IS a clone of a Satanic priestess?

For quite a while, there have been rumors about Taylor Swift and her alleged connection with the Illuminati. In fact, her album “Folklore” is allegedly not just about her membership in the Illuminati, but her behind-the-scenes relationship with a fellow Illuminati clone of JFK Jr. (Yup, the same JFK Jr. who Q-Anon keeps insisting is going to come back to claim the presidency after Donald Trump reclaims the presidency and then steps down to make sure that JFK Jr. is going to claim the presidency. Yes. Perfectly logical.)

However, let’s face it, allegedly being a member of the Illuminati is fairly common for big time celebrities. Everyone from Jay-Z to Beyonce to Kanye has been rumored to be part of or in some ways associated with the secret society.

But this great Taylor Swift conspiracy theory goes it one better, saying that she’s not just a member of the allegedly evil clandestine group, but that she’s actually a clone of one of the OG’s of the Satanic church.

The conspiracy theory all began when people started to notice more than a passing resemblance between T-Swift and Zeena LaVey. In fact, Taylor looks an awful lot like the young Zeena LaVey when you picture them side-by-side. 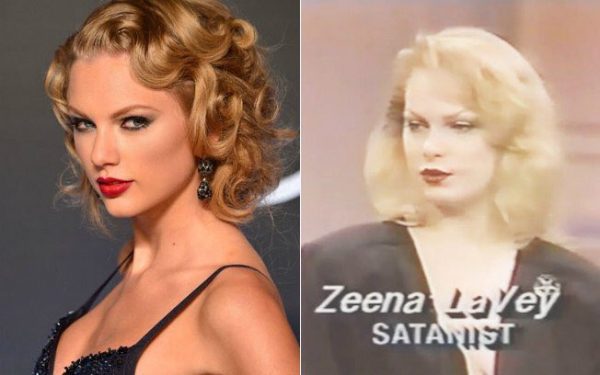 Which one used sunscreen with SPF 500 and which one did not?

She was the high priestess of the Church of Satan between 1985 and 1990, and daughter of the infamous Anton LaVey, who founded the church in 1966 and became something of a pop cultural figure in the underground during the late ‘60s and ‘70s, hobnobbing with stars like Jimmy Page and Mick Jagger.

Well, when your Dad founds the Church of Satan, you’re probably not going to become a preschool teacher. And, sure enough, Zeena got into the family business, and actually became a very visible spokesperson for satanism in the ‘80s. Now, keep in mind that the Reagan ‘80s were a very conservative time. How conservative was it? Well, back then it was the far RIGHT wing extremists that were big proponents of political correctness trying to stifle free speech. (Wacky!) So, while Zeena was out doing daytime talk shows and talking about satanism, and, looking far more attractive than her creepy looking father and thus offering a much more enticing spokesperson for the cause, it really riled up the religious extremists. And allegedly it did so to the point where she was receiving death threats on the regular. Because nothing says I’m a fervent disciple of Christianity like threatening to kill people who disagree with your beliefs.

As someone who routinely received threats of this sort from religious types while I was writing a column at the Rock Island Argus, for having the audacity to write that gay people deserved to be treated with respect and equality and occasionally comparing a rock singer to God, I can vouch for the veracity of this occurrence during this time in history.

So, anyway, allegedly Zeena was getting death threats and feared for her life. So, as ya do, she decided to have multiple clones made of her, so that she could, through a Satanic ceremony, transfer her consciousness to each of them so in the event of her untimely death she could move into a new clone body. 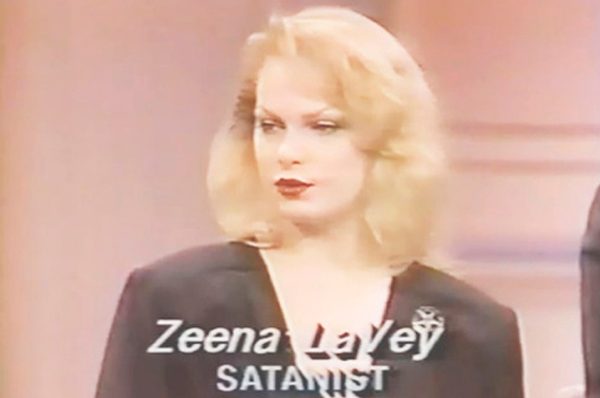 “Today on ‘Maury,’ hot Satanists who want to be cloned! No paternity test needed!

Allegedly these clones were created between the years of 1987 and 1989. That latter date is important because, as we all know, Taylor Swift was “born” in 1989, as she repeatedly has mentioned, even going so far as to name one of her albums “1989.” Allegedly, that album is full of clandestine references to her being a clone. “Shake It Off” refers to shaking off the Zeena identity into a new body. “Blank Space” is about the clone being a blank space for Zeena to transfer her consciousness. “How You Get The Girl” is a tongue-in-cheek nod to how Taylor was created as a clone.

But the biggest clue is “Bad Blood.”

“Bad Blood,” obviously, is about the blood of Zeena used to create Taylor Swift, and how Satanic blood runs through her system.

In the video, which is filled with Satanic symbols and Illuminati imagery, according to Internet researchers, Swift is shown being reconstructed by scientists to make her immortal (just like Zeena did in being cloned). Also, allegedly if you translate the phrase “Zeena Taylor Bad Blood,” in the Hebrew gematria it translates to “identical twins” and has a numeric value of 1330 – 33 being a number associated with the Illuminati, and 13 being a number Taylor Swift seems to have an affection for. Also, in the video, Swift is named “catastrophe,” which, using the same Hebrew translation comes out to “devil horns,” and she’s “killed” initially in the video by a character named “Arsyn,” which allegedly translates to “hexagram.” Why a hexagram would kill devil horns in order to be turned into a clone is anyone’s guess, but, hey, let’s go with it.

So, anyway, a variety of conspiracy theorists on the Internet insist that this is true, and that anyone who tries to convince you otherwise is a member of the Satanic Deep State running a disinformation campaign. Also, a poo poo head.

And, let the record state, I am no poo poo head.

Besides, who am I to shoot down a perfectly hilarious and awesome conspiracy theory? I find this all completely plausible, logical, and perfectly reasonable that a massive pop star who almost exclusively writes snotty songs about her exes is a clone of a Satanic high priestess. Besides, fuck Jake Gyllenhaal! That guy’s an asshole! And his name has too many vowels!

Incidentally, Zeena LaVey is actually still alive. She’s now known as Zeena Schreck. She eventually outgrew her time in the Church of Satan, and in a rebellious move against her father, quit the church to become a tantric Buddhist, and also spent some time dabbling in the worship of the death god Set.

She also got into music briefly, and was in a band called Radio Werewolf, which, quite honestly, is pretty freaking awesome.

It also brings up an interesting conspiracy theory about Howard Stern…