Home › Cities › Rock Island › Illinois Mask Mandate Could Be Off By Thanksgiving; Will Pritzker Deliver, Or Be A Turkey?

Illinois Mask Mandate Could Be Off By Thanksgiving; Will Pritzker Deliver, Or Be A Turkey?

Illinois’ mask mandate could be off the table by Thanksgiving, according to comments made yesterday by Gov. JB Pritzker, allowing families to gather for the holidays without following covid mandates on the holiday to do list.

During his weekly covid-19 status update for the state, Gov. Pritzker said he’s hoping to be able to lift mask mandates in time for Thanksgiving and Christmas. 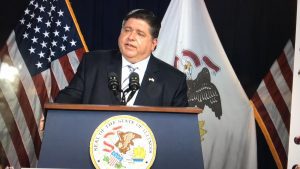 Illinois Governor JB Pritzker addresses questions about covid-19 and whether or not the mask mandate will be lifted soon.

“State health officials are continuing to watch the numbers to determine when the right time is to remove the mask mandate,” Pritzker said, while noting that he wasn’t going to be doing so soon, and wasn’t sure when he would.

“I know pretty much every moment of every day you’ve wanted us to remove every single mitigation,” he added. “Every question that you give is a question about removing mitigations. I want them to go away too, but we want to make sure that we’re keeping people healthy and safe following the guidelines that doctors are offering for us. And so we’ll continue to do that and obviously we want to remove the mitigations as we approach the holidays. These are, you know, that’s an important marker for us.”

Pritzker noted that the numbers for Illinois have been heading in the right direction, and said he’s optimistic.

“We want to make sure these numbers keep going down. We’d like very much to head into, you know, we have three holidays coming up, but especially Thanksgiving and Christmas, where people spend extended amounts of time together, so we’d like very much to get to a place where we can remove certain mask mandates,” he said.

Pritzker has maintained that it’s still too early to take off the mandates, last week saying he wasn’t going to cave to pressure and would wait until the time was right, according to his health and scientific advisors.

The state’s test positivity rate is down to 2.5% but Pritzker says other factors are involved.

However, the Governor’s tone was far more upbeat yesterday than it has been.