Home › Cities › Rock Island › Illinois Gov. Pritzker Doubles Down On Mask Mandate And Covid Restrictions; When Will They End?

Illinois Gov. Pritzker Doubles Down On Mask Mandate And Covid Restrictions; When Will They End?

As Illinois covid numbers continue to improve, pressure is mounting for Gov. JB Pritzker to remove the covid-19 restrictions and mask

mandate which has been in place since August, but yesterday in a press conference Pritzker renewed the mask mandate and said it was still “way too early” to remove it.

However, with Illinois numbers getting better, will we see any movement soon?

This week, Illinois became one of just six states nationwide to move from the high level of covid transmission (the highest) down to the substantial level. The state is now at 95 cases per 100,000 people; the cutoff for substantial is 100 per 100,000.

“We’re watching to make sure that we’re on a good downward trajectory,” Pritzker said in a press conference. “That’s what we were looking for back in May leading into June; it’s what we’re looking for now in order for us to possibly make changes.”

Illinois Department of Public Health officials reported 2,913 new confirmed and probable cases of COVID-19 and 39 related deaths today. There have been 1,660,883 total COVID cases, including 25,327 deaths in the state since the pandemic began.

The IDPH also reported that the seven-day statewide test positivity rate from Oct. 6-12 is at 2.6 percent, and within the past 24 hours, laboratories have reported testing 105,515 specimens for a total of 33,443,341 since the pandemic 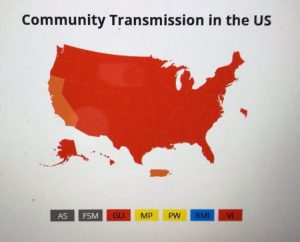 Illinois covid numbers are going in the right direction.

As of last night, 1,615 patients in Illinois were reported to be in the hospital with COVID-19. Of those, 365 patients were in the ICU and 197 patients with COVID-19 were on ventilators.

A total of 14,927,266 vaccines have been administered in Illinois. The seven-day rolling average of vaccines administered daily is 28,950.

COVID-19 cases across the U.S. have fallen by 21% over the last two weeks, with hospitalizations down 20 percent according to the U.S. Centers for Disease Control and Prevention.

The CDC recommends everyone, regardless of vaccination status, wear masks indoors in areas with high or substantial community transmission. On Wednesday, all of Iowa’s 99 counties were classified as “high” transmission.

Illinois was one of only six states to have moved down from “high” to “substantial.”

Sean Leary
Sean Leary is an author, director, artist, musician, producer and entrepreneur who has been writing professionally since debuting at age 11 in the pages of the Comics Buyers Guide. An honors graduate of the University of Southern California masters program, he has written over 50 books including the best-sellers The Arimathean, Every Number is Lucky to Someone and We Are All Characters.
See More Articles From Sean Leary
Tagged: #illinois covidcovid restrictionscovid-19illinois covid-19 restrictionsJB Pritzker