Home › Columns › Sean Leary › Got My Second Covid Shot, Only A Matter Of Time Before My Super Powers Activate…

Got My Second Covid Shot, Only A Matter Of Time Before My Super Powers Activate…

It’s only a matter of time now.

This week, I got my second covid-19 vaccination shot, and as we ALL know from the research we’ve done on the internet, the alien DNA mixed with the Bill Gates microchip and a secret recipe of nine herbs and spices will soon result in me developing mutant superpowers, in order to fight the Nirons, interdimensional aliens who are due to arrive to conquer earth any moment now.

What? You didn’t read that website? Or maybe it was just a TikTok?

It’s not entirely out of the realm of belief that something like that is out there, given the ridiculous conspiracy theories floating around regarding covid and the covid vaccine.

One of the most hilarious and moronic of them is the theory that the vaccine contains a microchip to track and control your actions.

Oh, you mean like the one that’s in your smart phone, which you use to get on social media, which programs you through dopamine hits to your brain a supercomputer calculates through a complicated algorithm to keep you hooked on social media?

Another ridiculous idea is the fact that Bill Gates is behind it. 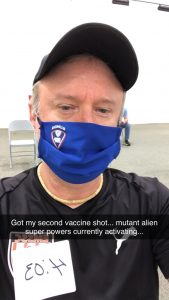 Do I get to be in the Illuminati now?

Yes, Bill Gates, one of the richest men in the world, has been waiting with bated breath to find out what exactly Barbara Lurleen from ButtCrack, Arkansas has been doing in her spare time. She wouldn’t return his calls, his DMs, or even his dick pics, and so now he’s gone to the elaborate step of creating a global pandemic to vaccinate billions of people in order to track her to find out just exactly when she goes to the Piggly Wiggly so he can stage a “random” meet cute where they reach for the same bananas, their eyes meet, and they both giggle, before both biting their lower lips and looking up at each other like Kristen Stewart in the “Twilight” movies, leading to a torrid romance.

Anyway, since there’s been so much rampant misinformation out there, some of it in local dog-training material, I thought I’d write a column letting you know what my own personal experience has been like with the vaccine, to hopefully allay your fears, and keep you from fashioning an aluminum foil hat just in time for summer, because man, that aluminum would be really uncomfortable in the heat.

I got my first shot, Pfizer, a couple weeks ago. I had pretty mild side-effects. My arm was sore for about 24 hours where I got the shot, and that was about it. No big deal.

I’d heard that if you’ve had covid before, the first shot can be a real bear. And not Yogi. No delicious picnic baskets involved. However, apparently, I haven’t had covid before, unbeknownst to me. Which is a good thing, because that’s one less Christmas card I need to send out this year, and I don’t even have covid’s address. 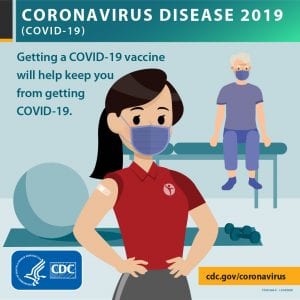 Oh, no, wait, that’s not it. Actually, what I did was research! Yeah, you know research, that thing you can do to learn actual facts and stuff. Wacky!

But that’s what I did. And the research told me to make sure to build up my immune system prior to the second shot, stay hydrated, avoid alcohol, and make sure to stock up on Reeses’ Pieces for when the aliens showed up. I checked all of those things off the list, even the Reeses’ because I thought they might make for a good reward for myself after I’d gotten the shot.

I went in, and got the shot late in the afternoon. I had soccer practice to coach that night, so I wanted to make sure I got it late in the day so I could get that in hopefully before I passed out. But, much to my pleasant surprise, I was fine that first night. In fact, my shoulder wasn’t even as sore as it was the first time. Yes! I was going to avoid any major side-effects!

I was even more encouraged later that night, as it seemed like I had an extra burst of energy, staying up late to complete some of my work for the next day in case I was knocked out. I don’t know if it was my immune system being revved up or what, but I was full of energy that night, stayed up until about 3 a.m.

The next morning was a different story.

I got up around 9 a.m. and felt pretty run down, about the kind of run down you get from a cold or a viral infection you might routinely get here during winter in the Midwest. Not great, not perfect, but still, not horrible either. I got some coffee and juice, drank a lot of water to stay hydrated as the doctors and research had said, and got in about three hours of work.

And then… I crashed.

Around noontime I started feeling incredibly tired. So much so that I had to quit what I was doing and lay down. I set an alarm for later in the afternoon to wake me up for practice later that night, but if I hadn’t set an alarm, honestly I don’t know if I would’ve woken up before midnight. I was out for the count!

I woke up at 4:15, and felt even worse than I had before — chills, fever, body aches, very lethargic. And so basically, I spent the rest of the night drifting in and out of sleep as I watched the Lakers completely annihilate the Suns and the Bucks utterly destroy the Heat.

However, around midnight, I woke up. I started to feel a little better. I started to get a little more energy. And so, instead of my previous plan to run a column in this spot from my book Sean Leary’s Greatest Hits, I was able to sit down and write this column.

So, I know at this point you’re asking yourself one thing: Did I try to put a magnet against where I got the shot to see if it would stick?

And of course, the answer is: You’re goddamn right I did.

Bought it in San Diego when I drove out there two years ago to go surfing and eat fish tacos.

Tried it once, twice, three times. No stick. (Very subtle surfing joke in there; bonus points if you got it.)

Tried my Roswell magnet from when I went to New Mexico. Surely that would have some magical alien technology to it.

So, maybe that means my mutant superpowers haven’t quite kicked in yet.

Sean Leary
Sean Leary is an author, director, artist, musician, producer and entrepreneur who has been writing professionally since debuting at age 11 in the pages of the Comics Buyers Guide. An honors graduate of the University of Southern California masters program, he has written over 50 books including the best-sellers The Arimathean, Every Number is Lucky to Someone and We Are All Characters.
See More Articles From Sean Leary
Advertisement
Tagged: adamantiumconspiracy theoriescovid-19covid-19 vaccineDeadpoolmagnetsSean LearySean Leary columnsupermanvaccineswolverine