Moline-based Fourth Wall Films and the Putnam Museum will screen the documentary at 2 p.m. Sunday, July 5, followed by a Q&A with 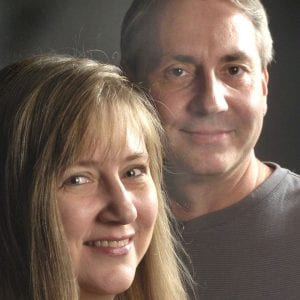 filmmakers Kelly and Tammy Rundle. An encore presentation will stream at 7 p.m. Monday, July 6. Viewers are invited to visit Facebook.com/HeroStreetMovie or HeroStreetMovie.com 10 minutes prior to each scheduled event for an introduction.

Born in a boxcar in the Silvis, Illinois rail yard, William Sandoval performed migrant farm work with his family and later became an accomplished amateur boxer. The attack on Pearl Harbor on Dec. 7, 1941 moved him to enlist in the U.S. Army.

At age 20, he completed his training and was assigned to Co. F, 504 Parachute Infantry Regiment, 82nd Airborne Division. After extended and harrowing combat action in Italy, Sandoval’s unit re-formed in England. 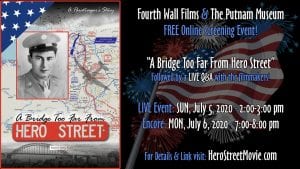 In September 1944, he became part of the ill-fated Operation Market Garden — still the largest air assault in history, launching 2,023 troop transport planes and 478 gliders from 24 airfields, carrying a total of 45,000 men. The day after his 21st birthday, Willie was one of 20,000 paratroopers who jumped into the sky over German-occupied Holland.

Willie wrote to his sister Rufina, “You will never know, sis, how happy I will be when I step onto the doorstep and say, ‘I’m home, Dad.’ That will be the happiest day of my life.” 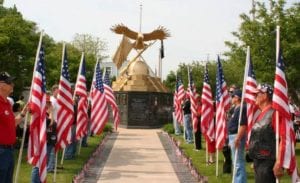 Hollywood film based on that book. The phrase “a bridge too far” was an alleged quote from Lieut. Gen. Frederick Browning in describing the sprawling military endeavor’s failure to take the final bridge at Arnhem, the last means of escape for German forces in the Netherlands, according to a Fourth Wall release.

The death toll was staggering, with 17,000 killed, wounded or missing — William Sandoval was among them. He died on Oct. 6, 1944 near the border of Holland and Germany, though his body was never recovered.

The Rundles’ film – which premiered last fall on the day before Veterans Day — features military historian John C. McManus, the author of “September Hope: The American Side of A Bridge Too Far”; “Hero Street, USA” author Marc Wilson, and Willie’s family and friends. The soundtrack includes acoustic guitar music by Joe Soliz. His great uncle Claro is one of the Hero Street Eight. Davenport artist Bruce Walters created original art for the film.

Only a block and a half long, Hero Street (formerly 2nd Street) in Silvis, lost six young men in World War II and two in the Korean War, more than any other street in America. Hero Street has provided nearly 200 American military service members since World War II.

Fifty family members of Willie Sandoval were among the 300 people who attended the Nov. 10, 2019 premiere of two documentaries related to Hero Street (including Fourth Wall’s “Riding the Rails to Hero Street”) at the Putnam Giant Screen Theater.

“It brought me to tears seeing that reaction afterward, seeing these incredible people and incredible heroes get their due,” filmmaker Tammy Rundle said after the showing. 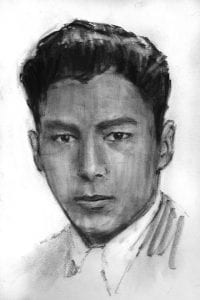 Relatives of Sandoval came from as far as Arizona, Tennessee, Colorado, and Indiana to see his story and the companion prologue “Riding The Rails to Hero Street,” addressing immigration to the area. After the first showing, the audience gave Tammy and her husband Kelly a standing ovation.

“I liked it a lot,” Rufina Guerrero (Willie’s 95-year-old sister) said then of the films. “All of my brothers were heroes.” She and her brother Ruben (who died in 2018 at age 95) were interviewed on film by the Rundles. Ruben enlisted in the U.S. Coast Guard in 1943 and was honorably discharged in 1946.

“A Bridge Too Far From Hero Street” is the third film in a 10-part documentary series that explores the personal and family sagas behind each of the eight heroes from Silvis. The Rundles’ 2015 “Letters Home to Hero Street” (co-produced with Lora Adams and WQPT-PBS) received a Mid-America Emmy-nomination.

The Rundles are currently in production on several film projects, including “An Infantryman from Hero Street” — the fourth film in the Hero Street series; a short museum film for the newly restored Forest Grove Schoolhouse No. 5 in Bettendorf; a feature-length documentary “Resurrecting Forest Grove,” and a short documentary “Over and Under: Wildlife Crossings,” funded by the BeWildReWild Fund at Iowa Natural Heritage Foundation.

The latter is a loosely-knit group of volunteers with a passion for wild things, and  a special fund within Iowa Natural Heritage Foundation for the purpose of exploring three questions: “What do you/we mean by wild? What lifestyle changes are needed for us to live within the bounds of sustainability? How can we create a wilder, more beautiful, more biologically diverse, and a more enduring Mississippi River watershed?”

The film is also an Official Selection at the Cedar Rapids Independent Film Festival and The Interrobang Film Festival in Des Moines.

Fourth Wall is an award-winning independent film production company formerly located in Los Angeles, and now based in the Quad-Cities. For more information, visit fourthwallfilms.com.