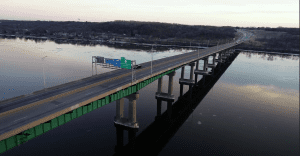 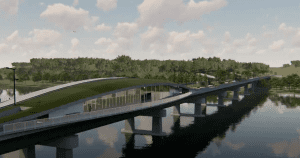 The planned renovation of the bridge, for wildlife, pedestrians and bikers.

During the live, virtual announcement, dubbed “A Historic Night in the Quad Cities,” Pregracke outlined the Foundation’s vision for transforming the aging infrastructure into a one-of-a-kind national treasure. The project, which would showcase and celebrate America’s second longest river and national mammal – the American bison – was announced just downriver from the bridge at The Rust Belt performance and event venue in East Moline/

As part of the virtual presentation, the Foundation also kicked off a public campaign to collect 50,000+ signatures of support for Bison Bridge. A replay of the announcement as well as signature forms can be found at www.bisonbridge.org.

“This will help put the Quad-Cities on the map, literally. It will be an iconic stop on Interstate 80 to the 42,000 people who cross it each day,” said Pregracke, a Q-C native and award-winning environmentalist and entrepreneur. “I will agree with anyone who thinks, ‘This is a far-out project.’ It’s wild. It’s not been done anywhere in the world, but it’s exactly what the Quad-Cities needs. We need something that will 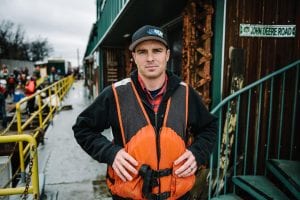 The Foundation’s goal is to garner community support for repurposing the bridge into a multiuse facility. Under the plan, the westbound lanes would be retrofitted into a crossing for wildlife, including a small herd of American bison it plans to steward. The eastbound lanes would be converted into a pedestrian viewing area and park safely distanced from the wildlife. It would boast a visitors’ center, interpretive signage and multiple viewing points for visitors to walk about and enjoy the wildlife and picturesque views of the river valley as well as neighboring LeClaire, and Rapids City.

“This would be the longest wildlife bridge in the world,” Pregracke said. “We’re not building a bridge. We’re just trying to save what is there.”

With 100 acres of grazing land on either side of the river and new prairie plantings planned for the bridge, the bison would live and roam across the bridge and in Iowa and Illinois, where millions of the majestic animals once roamed.

For the past two-and-a-half years, Pregracke has been assembling his Foundation team and quietly presenting the concept to key decision makers across the bi-state area. The Foundation is made up of a cross-section of organizations and leaders from multiple states who span the 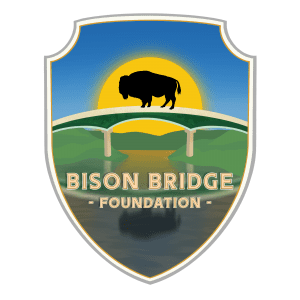 The logo for the new Bison Bridge Foundation.

Foundation member Kevin Marchek, a retired Illinois DOT regional engineer, said the timing of the concept’s presentation is advantageous, in that, I-DOT now is in phase one of the I-80 bridge study. The study follows a required process outlined by the National Environmental Protection Act (NEPA).

“The most important thing (for Bison Bridge) is we’ve started this in the early stages of the process where we can impact the outcome,” said Marchek, who had been involved through IDOT in the planning of the area’s new Interstate 74 bridge now under construction.

Foundation member Matt Hughes, a transportation consultant in Springfield, Ill., said the group has done its due diligence – landing critical meetings to present the concept to lawmakers, transportation leaders and community and business leaders. “The last  two years we’ve navigated a lot of things. We actually have a big project here with a lot of people paying attention to it,” he said.

The East Moline native, who has been friends with Pregracke since childhood, recalled the project’s simple start as sketches on a posterboard. While the presentation has come a long way, Hughes said, “I prepared Chad to hear the word ‘No’ a lot, and we didn’t hear ‘No.’ We were well received.”

Hughes, President and Owner of MRH Solutions, Springfield, said one of the benefits for the Foundation is that I-DOT has included a new bridge crossing and funding in its five-year capital plan. “They are committed to a new crossing,” he said.

He and Marchek said the bridge study likely will result in up to six alternatives for replacing the I-80 bridge.

“But there doesn’t seem to be an engineering case to rehab the existing bridge,” said Hughes, who also worked at I-DOT for a decade. “To me, it’s highly likely they will build another structure.”

The Foundation’s efforts now will shift toward public education. “We need the community’s support, and not monetarily, to help in the NEPA process that the DOTs are going through now,” Marchek said. 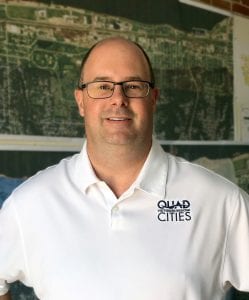 Pregracke said his ultimate goal is to secure national park status for Bison Bridge to help elevate the Quad-Cities stature, which could aid in growing its population as well as recruiting and retaining workforce talent to the area.

“I feel like this will be a really big attraction and people will come from all over the world to this place,’ he said. “This will put us back on the map, and if you’re not on the map, nobody is moving their headquarters here.”

The project already is receiving widespread support from a number of area organizations, including the Quad Cities Chamber and Visit Quad Cities.

“This touches our tourism master plan on so many levels,” said Dave Herrell, President and CEO of Visit Quad Cities.

In what is a very competitive tourism landscape, he said destination organizations tend to focus on marketing their existing attractions. “But to be able to take an old asset and repurpose it into something new, I think that’s the secret sauce.”

Herrell said the Bison Bridge project not only will set the Q-C region apart from all its Mississippi River counterparts, but it will also raise its visibility as a destination nationally and internationally.

With concerns for health and safety heightened by COVID-19, he said, “The outdoors is going to be more and more critical as we think of what we want to be as a destination and how we take our global asset – the Mississippi River – and elevate it to a new level.”