Things are not looking good for this fall in regard to covid-19. Numbers are spiking, the government has been pathetically inept in terms of dealing with the crisis, and the economy is once again on the verge of completely tanking. Unemployment is up, some industries are shut down through the end of the year, and others are teetering on the precipice of being shut down, maybe for good. I don’t know about you, but I’m so pessimistic I’m starting to stock up on toilet paper.

That’s why it’s more important than ever to shop at your locally-owned small businesses now.

Local businesses aren’t just the economic and entrepreneurial life blood of an area, they offer you a world of new adventures you’re never going to find anywhere else. And if variety is the spice of life, the Quad-Cities offers you a pretty ample spice rack that’s full of delicious flavors for you to enjoy.

Yeah, yeah, yeah, I know. I see your eyes rolling, “ANOTHER damn patronizing editorial about shopping local, blah blah blah…” and I know, I know, you don’t want the lecture. I know, I’m not your Dad. The DNA tests came back negative. I remember.

But this isn’t a patronizing editorial. Just the opposite. I’m telling you to shop local because you want the best. And you’re going to get that by shopping local — especially since all of these shops are taking great pains to make sure your experience is safe, conscious and preventative of any covid risks.

When it comes to eclectic, funky local shops, stops like Fred and Ethel’s, Major Art and Hobby, Mellow Blue Planet, and Tim’s Corner are bursting with vibrance and character. There’s really no comparison when it comes to locally-owned brew pubs and bars vs. your chain restaurant lounges and the like. If you’re looking for a great drink, Icons Martini, Wake Brewing, RIBCO, Radicle Effect, Midwest Ale Works, Bent River, and a host of others are fantastic. Pretty much all the performing arts venues are closed up, but Circa ’21 is offering periodic shows and virtual shows, and Rozz Tox and Kavanaugh’s have small-scale stuff and both offer cool — if diametrically different — vibes.

I’ve written many a column and short story sitting outside, imbibing some coffee or a chai, at Cool Beanz in Rock Island.

And of course, for locally-owned media that covers the local

scene and offers virtual performance spaces, virtual art galleries, a virtual writers studio and more, you can’t beat your source for fun, FREE, local entertainment and features, QuadCities.com. (Like that little plug there?)

Listen, I get it, nobody shops completely local all the time, because quite frankly there are some non-locally owned items and services that you can’t avoid, but the more you can, the better. Ok, maybe some hardcore people are giving me the condescending snake eye now, snooting their noses up and saying (i.e. lying) that they ALWAYS shop local. And well, if that’s you, good for you. If you vape smoke signal me by the end of the week, your locally-hand-drawn certificate of pretentious hipness will be delivered by a locally-bred pigeon to your hobbit home to avoid the use of a printer or computer made outside of the Quad-Cities and a federal mail service based in Washington. 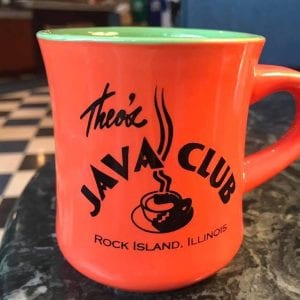 Theo’s is one of the godliest spot in the Quads. Many great memories, meals and beverages have been had within its hallowed walls.

But as for the rest of us who live in a world that doesn’t include the phrase artisanal toilet paper, we shop a combination of local and chain. When I want my groceries, I predominantly go to HyVee (local), but Aldi (big box) has got some fantastic stuff and some great bargains. I mean, really, if you don’t Aldi, you’re missing out. If they’re having a big sale on produce, I’m going to go there to pick it up. (Hey, listen, you can’t beat 49 cents for avocados.)

I love my Theo’s and Cool Beanz, but sometimes I also get my daily caffeine fix from the Colorado-based Caribou Coffee. I mostly cook at home, and typically when I go out to dinner, I always go to a local restaurant like Curry Out, Big Swing, Le Mekong or La Rancherita. But I’ve also eaten lunch at Subway and late on a Saturday night after the bars have closed I have been known to hit the Taco Bell drive-thru. I love Olde Town Bakery, but if they’re not open, I’ll roll Dunkin Donuts. If I’ve got the choice between a big box and a local business, I’m going to shop local, especially since they’re offering me something I can’t get anywhere else. And especially since I, myself, have been a local businessman for almost two decades. But I recognize that there are some items that are easier to pick up at a big box, and sometimes, especially when you’re in

The Big Swing in downtown Rock Island offers a varied menu of food and beverages.

And so it goes. It doesn’t make you a terrible person. Those big box stores do contribute local taxes, and employ local people and their jobs are dependent upon our business. Well, okay, if you only shop big box and never shop local that does make you a person that should really get out and expand their world – trust me, you’ll thank me later for the restaurant recommendations here, and really, any of the local Mexican restaurants are terrific – but in my experience, those people are as rare as their opposites.

I’ve been an entrepreneur and run local businesses for over 20 years now. I’ve run a local publishing company, ran a local magazine and two local websites, run two theater groups and comedy troupes and currently am a co-owner in the local online site you’re reading. I also run a local tutoring company that offers free help to at-risk kids, a local theater company and a local publishing company. As the operators of Theo’s, Cool Beanz, Blue Cat, Icons, HyVee, Olde Town Bakery, Tim’s Corner, La Rancherita, Major Art and Hobby and dozens of other local businesses can tell you, I’ve been a loyal local shopper for my entire time in the Quads. 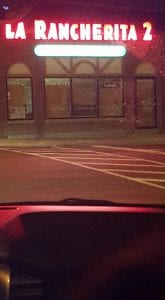 La Rancherita — my favorite Mexican restaurant in the Quads, just ahead of Nally’s.

So yeah, I’m biased towards local businesses. But it’s not just a political or ethical bias, it’s because those businesses offer awesome things. They’re not just great LOCAL businesses, they’re great BUSINESSES. They don’t need some sort of special treatment just because they’re the local guys, they should be treated with the same respect and regard as those big boxes, and, actually more, because they are pure entrepreneurs who have started from nothing and built it from the ground up, and they’re working their butts off to put out a quality product.

And they do. Nothing at Chili’s is going to match the specials at Big Swing – and for the same price or less. (I recommend the meat loaf – damn great stuff.) The reason Chi Chis and Carlos O’Kelly’s went sombrero down is because people realized they could get much better and more authentic food from the myriad local Mexican restaurants around here. (I’m mostly a Nally’s, Habaneros, El Patron and La Rancherita guy, but all of them are great.) And while Applebee’s can advertise their giant, watered-down fishbowl drinks all they want, Icons martini bar is going to kick their butt on taste and quality every time. (The traditional martinis rock and for something different, the pineapple chipotle is freaking amazing.) And for a HUGE, awesome guide of local restaurants that offer carry-out, pickup and covid-friendly service, check out our list here on QuadCities.com. (Also, if you own a business that we don’t have featured, please contact me at Sean@QuadCities.com so we can get you listed — FOR FREE!)

So do yourself a favor. Shop local, especially now when they really need your help. It’s how you find unique flavor and it’s always an adventure to try those new things you’re never going to find anywhere else.

Your new favorites await you . . .