Singer/songwriter, Ray LaMontagne, will be Just Passing Through the Quad Cities this week.

Catch an unforgettable live performance from Ray Montagne, with special guest Liza Anne, as he brings his Just Passing Through Tour to the Adler Theatre (136 E 3rd St. Davenport) this Wednesday Oct 24 at 7:30 p.m. 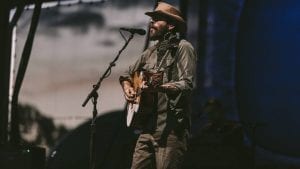 Grammy Award winning singer/songwriter Ray LaMontagne returns to the stage on his Just Passing Through acoustic tour, highlighting songs from his vast and varying body of work.  Joining Ray on the tour will be John Stirratt from Wilco on bass.  The two will be playing songs spanning across Ray’s albums including Trouble, Till The Sun Turns Black, Gossip in the Grain, God Willin’ & The Creek Don’t Rise, Supernova, Ouroboros, and Part Of The Light.

Ray LaMontagne has released 7 studio albums, 5 of which have reached Top 10 on Billboard’s Top Rock Albums chart and Billboard’s Digital Albums chart.  Additionally, Ray’s 2010 album God Willin’ & the Creek Don’t Rise won the Grammy for Best Folk Album and was nominated in the coveted Song of The Year category for “Beg Steal or Borrow.”

Tickets range from $39.50 – $49.50 and can be purchased online at https://www.ticketmaster.com/ray-lamontagne-just-passing-through-adler-theatre-davenport-ia/venueartist/49254/2397726.