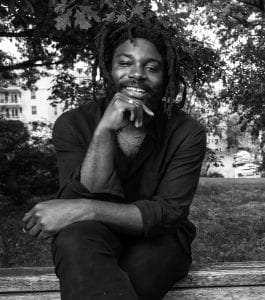 Library staff will host informal discussions on Tuesday, February 19, starting at 5:30 pm at Rozz-Tox Coffeehouse, 2108 3rd Avenue, Rock Island, and again on Tuesday, March 19, also starting at 5:30 pm, at Cool Beanz Coffeehouse, 1325 30th Street, Rock Island. Guests can purchase a coffee or beverage and learn a little about Reynolds’ books or share thoughts about ones they’ve already read. The library will provide a bookmark with suggested works by age level. Each event may last 60 to 90 minutes, depending on the amount of discussion. Unlike a book club, no advance reading is required.
Davenport Public Library and Rock Island Public Library have partnered to bring Jason Reynolds to the Quad Cities for multiple presentations on March 28 and 29. For more information about these visits, and associated events, visit www.DavenportLibrary.com or www.RockIslandLibrary.org, or call Davenport Library at 563-326-7832 or the Rock Island Library at 309-732-READ.
Reynolds’ Rock Island presentations are on March 29, and were made possible by support from Rock Island Public Library Foundation, Rock Island/Milan PRIME grant, The Sedona Group, Rock Island Community Foundation, Kiwanis Club of Rock Island and Junior Board of Rock Island.
Reynolds writes books for middle-grade, high school and adult audiences. His works include When I Was the Greatest, The Boy in the Black Suit, All American Boys (co-written with Brendan Kiely), As Brave As You, For Every One, Miles Morales: Spider Man, the Track series (Ghost, Patina, Sunny, and Lu), and Long Way Down, which received both a Newbery Honor and a Printz Honor. He  is also a New York Times bestselling author, and has earned acclaim as a National Book Award Honoree, a Kirkus Award winner, a two time Walter Dean Myers Award winner, an NAACP Image Award Winner, and multiple Coretta Scott King honors.