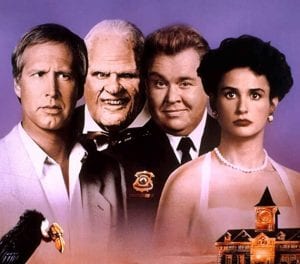 This week’s Garden Cinema theme is ‘Hollywood Fumbles,’ films that shouldn’t have been made but we’re glad they were.

Super Mario Bros was dreamt up as an obvious cash grab to capitalize on the successful video game franchise.  The “film” features an impressive cast including screen legends Dennis Hopper and Bob Hoskins, as well as newcomer John Leguizamo.  This coupled with cutting edge special effects and fantastic Production Designer David Synder(of Blade Runner fame) insured nothing could possibly go wrong….right??  Several script rewrites and concept changes ensured a very over budget, confusing and stressful film production that led stars Hoskins and Leguizamo to drink every day to get through the ordeal.    While this film was marketed towards children, the dark tone and odd character design choices may make it not make it desirable for younger children (or those who have taste.)

a film directed and written by Dan Aykroyd

Nothing But Trouble is a prime example of how casting popular comedy stars and allowing an SNL alum  to write and direct is not an equation for absolute success.  With a budget of $40 million and a box office gross of $8.4 million (along with its 5% Rotten Tomatoes score) it is clear this film did not resonate with audiences or critics. Stylized as a bizarre cross between Texas Chainsaw Massarce and the Munsters, this dark comedy will leave you wondering, WHY??  The biggest questions may be, why did Dan Akroyd play so many characters, and why did they chose the surprise musical guest at the end? Most troubling question, is why after watching the final product, did anyone agree to put this thing out at all?  Thankfully this is the only film they let Dan Akroyd write and direct.

This is a free event, but seating is limited. Feel free to bring a blanket or lawn chair! Food and drink will be available from the walk-up window. Masks are required to use the restrooms – only 2 people inside at a time. For more information, please visit https://www.facebook.com/events/591495078209716/.