Downtown Rock Island Is Ripe For A Renaissance

Denny and Brett Hitchcock are the most tenacious of entrepreneurs.

For over 40 years, their business, Circa ’21 Dinner Playhouse, has endured a handful of recessions, booming and barren economic conditions, and, now, a pandemic.

It certainly hasn’t been easy. Especially not in 2020.

Both father and son have said, without hyperbole, that their business was very much in danger of going under if pandemic and economic conditions continued. 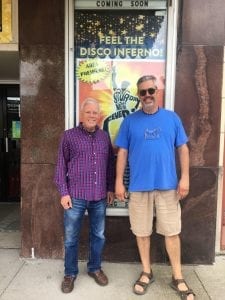 However, this week, they re-opened, after several months of stress and uncertainty. They debuted a new show, “Savannah Sipping Society,” a homey comedy that’s got the heart and humor to make it a success in times that are sorely lacking in both. (You can pick up tickets for the show, running through Nov.7, at www.circa21.com, and by calling (309) 786-7733, ext. 2). Their smaller spot next to Circa, the Speakeasy, has begun to debut small shows, and both, with some navigation and social distancing, are hopeful to see great crowds. Already, Circa’s numbers are showing promise.

“People are hungering to get back to the theater again, to get things back to normal, or as close to it as we can get right now,” Brett said in a recent interview.

And so, once again, the Hitchcocks – who it should be noted aren’t trust fund kids, aren’t running a not-for-profit, and are very much invested in their business as their sole income – have made it through a crisis with determination and grit, and in doing so, have kept an anchor of downtown Rock Island alive and thriving, offering several dozen employees homegrown jobs keeping the Quad-Cities economic life going.

And their story could very well be the story of downtown Rock Island.

Once thriving, now struggling, but with tons of promise, and the opportunity to be a jewel of the area bringing in hundreds of local jobs.

I thought about this as I was walking around the downtown the other day, while I was waiting for food at Healthy Harvest Urban Farms, the best vegetarian café in the area, and one of the best restaurants as well. Located at 1616 2nd Ave., it’s just the kind of unsung treasure that Rock Island has long needed, and one which fits the downtown’s style as an eclectic, creative, bohemian landscape.

As I was walking around the downtown, noticing all the funky, cool architecture, and all the empty buildings, I couldn’t help but be reminded of a trip I took a couple summers ago to Boulder, Colorado.

Boulder, like Rock Island, once had a downtrodden downtown. But now, it’s amazing. Over several blocks, you can pop in to a variety of awesome retail shops, restaurants, coffeehouses, cafes, and, yes, dispensaries. It’s got a diverse crowd, a chill vibe, and it’s open and thriving day and night. 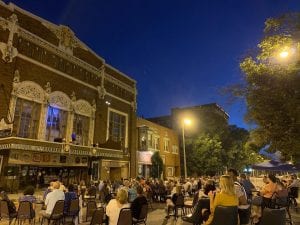 A full crowd attends the Aug. 16 Music on the Marquee at Circa ’21.

It’s everything downtown Rock Island could be.

At one point, the District was THE place to be. In the ‘90s, when I first moved out here from Chicago, it was one of the reasons I bought a house in Rock Island, because it was where I constantly hung out. Spots like RIBCO, Blue Cat (now Big Swing), Copia (now Icons), Huckleberry’s, Circa, The Speakeasy, Theo’s, Steve’s, and more, were habitual haunts for me and my friends. Over the years, Rozz Tox has been added to the list, along with Wake, just outside the downtown area, and a world-class, beautiful outdoor area has been created along the riverfront in Schwiebert Park.

A lot of those spots are still there, still vibrant, still doing great things. But there are too many empty spots between them. However, those spots offer opportunities, for even more terrific places for people to go.

There’s plenty of downtown housing, plenty of downtown space, and plenty of potential. Rock Island has got a smart, forward-thinking mayor in Mike Thoms, an alderman for the downtown with energy and vision in Dylan Parker, a strong relationship with the downtown business association, and more. It just needs people who are going to walk down its sidewalks and see the potential I did, and do. And I have faith that before long, those people are going to emerge, and that’s going to happen. It’s just going to take some tenacity, vision, and action.

And when it does, there will be Circa ’21, and Denny and Brett Hitchcock. The visionaries, the entrepreneurs, who have seen it all, struggled through all the tough times, and emerged with their dream still alive. Never forgotten, always an anchor, a building block, upon which will once again rise a vibrant arts and entertainment district, and a jewel of the Quad-Cities.