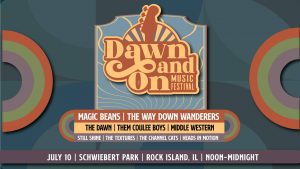 Mike Mathews and Sean Ryan are pumped for this year’s Dawn and On Music Festival – firstly for the simple fact that it’s back on.

The all-day celebration of music, family and fun – Saturday, July 10th from noon to midnight at Schwiebert Riverfront Park, 101 17th St., Rock Island – had to be canceled due to Covid last year, and there were serious questions whether it would be a go this summer. 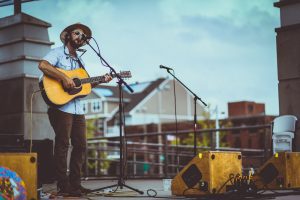 Chicago Farmer playing at the 2019 Dawn and On Music Festival.

“We got off to a very late start just because the artists didn’t know what was going to happen,” Mathews, the event co-director, said recently. “They weren’t necessarily making any commitments. So, normally we like to begin the process around the first of the year, we didn’t really get started in earnest until about early April, so we rushed it through pretty quickly.”

“The interesting thing about it was, everyone was available because no one had dates booked at that time,” he said. “Literally, once the CDC opened us back up, all these plans started coming into play really quickly. So most every band we reached out to was available. The problem was routing ‘cause no one was touring.”

“There were a handful of bands that we absolutely loved, but they had to fly in from the West Coast — which for just a one-off show, unfortunately that costs a lot more to bring in bands,” Mathews said. “So we had to get a little creative in terms of our lineup. And fortunately, we were happy with how it turned out.”

Now, with many states fully open to public events (including Illinois), many bands are actually starting to tour.

“But at the time we were booking, there wasn’t really touring plans in place,” Mathews said, noting they nailed the lineup down in May. “What we’re trying to do in some cases is be an anchor, you could start your tour here and then schedule shows around it.  But there was still, even at that point there were still some question marks.”

“So, whereas we might be able to get a band from the West Coast in the past, where they’d be passing through the Midwest, or they would build a little mini-tour around Dawn and On, in a lot of cases we would be the only show that they would have had in the area,” he said. “That was a tough part about it.” 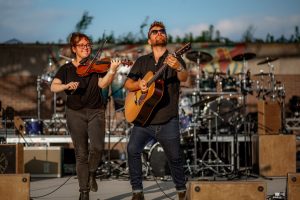 The Jon Stickley Trio performing at the 2019 Dawn and On Music Festival.

“This year, booking-wise was a little tough,” Ryan – frontman for the host band, The Dawn — agreed. “Either we’re gonna get these amazing deals, because yeah, we want to play. It ended up being not that, because no one’s touring. Then those prices jump way up because you’re flying everybody in.”

“Our thing has been, we’ve been lucky enough between Mike and I to find these headliners that we can’t really afford but we make it happen for whatever reasons,” he said. “This year was a little more difficult.”

Magic Beans said they would drive from Boulder, Colorado for a one-off, Mathews said, noting they’ve played Red Rocks. “Which was really great – they’re really excited to be here and we’re pumped to have them,” he said. 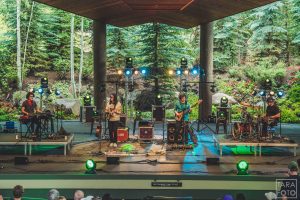 Magic Beans will be coming from Boulder, Colo., to perform at Dawn and On.

Founded in 2015, Dawn and On is a family-friendly, homegrown music festival featuring the area’s best local and regional talent. 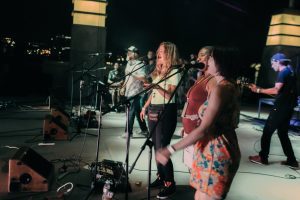 Singers with The Dawn performing at the 2019 Dawn and On at Schwiebert Park, Rock Island.

“From rock to jam to bluegrass, you’ll find all of our bands highly danceable and indescribably fun,” its Facebook page says. “Our goal is to bring all the magic of the multi-day music festival and condense into one highly affordable day right in your own backyard.”

For 15 years, the western Illinois based roots rock/jam band The Dawn has been spreading their love of cutting-edge improvisational rock throughout the Midwest, according to their bio.

“The Dawn’s live show experience has proven contagious and is tightly gripped in spacious jams, roaring guitar and soulful harmonies,” the bio says. “Now a six-piece, The Dawn pushes the envelope at every performance and audiences are rewarded with an experience that can only be described as ‘The Dawn Effect.’ Coupled with an equally adventurous light show, The Dawn concerts keep their dedicated and growing fanbase coming back for more.”

The Dawn’s 2014 release “Waiting On The Storm” was received with excellent reviews and helped catapult the band to major festival experiences, including the inaugural Phases of the Moon, Summer Camp and Camp Euforia. Their 2017 release “Wooly” was their first release on the Cartouche Records label and further showcased the band’s songwriting abilities and diversity. 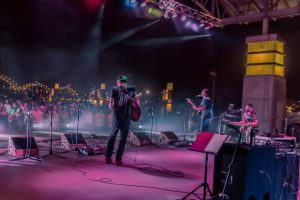 The band had played Moline’s North Shore Inn on the Rock River a lot, and Ryan suggested one date with three bands, then it accidentally turned into Dawn and On in 2015, he said recently. He called Mathews, and the “first year was so great, it kept building and building,” Ryan said.

Mathews originally pushed for the festival name “Dawnaroo” and was unanimously outvoted, he said. “That was the approach the first time – it was just a fun thing; it wasn’t gonna be an annual deal,” he said.

“We’re all just having fun. My biggest thing is getting on stage, and I like to look over at these people on stage with me,” Ryan said. “When I smile, do they smile back?”

In the last chorus of “1984,” he and bandmate Derek Fortin sing together and they always look at each other and smile, Ryan said. “It’s like, those are the moments, like, yes!” 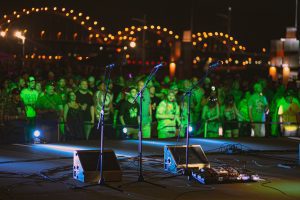 The stage at Schwiebert Riverfront Park, Rock Island, during the 2019 Dawn and On.

In addition to the live music, Dawn and On brings in some of the area’s most talented arts and craft vendors, a variety of delicious food and snacks, premium craft beer and a few surprises along the way. It’s averaged around 1,000-1,500 in attendance each year and 2019 was the first time it was held at Schwiebert Park in downtown Rock Island.

Besides The Dawn as the host band, the festival tries to vary the lineup every year, so this next one is entirely different than 2019, Mathews said. The Way Down Wanderers – who will release a new album in September — last played the Quad-Cities in October 2019 at the Redstone Room, Davenport, and have been a local favorite. 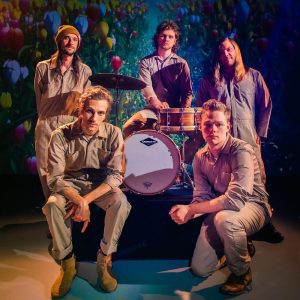 The Way Down Wanderers is an Illinois bluegrass band.

We were tucked away a little bit more, a little bit off the radar when we were down on North Shore and once we moved to Schwiebert Park, we were a little bit more in the public eye,” Mathews said. “So, some folks that may not have known about us previously were able to show up. But then I think we lost some of the neighborhood locals as well.”

This year’s event features the most number of sponsors ever, he noted.

“And we brought on several new sponsors. There was a lot of excitement just to have live music back in the Quad-Cities,” Mathews said. “Sean Ryan, he approached most of the sponsors that we have and the response was very positive. A lot of people were excited, because a lot of these places, they haven’t had any events to sponsor for a while. So in a lot of cases, we were the first ones to approach them with summer events.”

Two of the new sponsors this year are The Echo music website, backed by River Music Experience, and American Bank & Trust, Mathews said. Some of the sponsors – like Moline’s River Roots Garden Supply – will have booths at the festival.

Charity and a pre-fest party 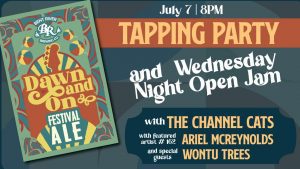 Bent River in Rock Island will host a tapping party on Wednesday, July 7, to introduce their Dawn and On Festival Ale.

Each year, Dawn and On chooses a local charity to donate some ticket proceeds to, and this year’s is the Rock Island YWCA. A portion of every ticket sold will be donated to the YWCA, which is raising money for a new $9-million, 38,000-square-foot facility in downtown Rock Island. Learn more at ywcaqc.org.

In 2019, Family Resources was the beneficiary from Dawn and On, and they got about $2,500, Mathews said. The first year, it was the Child Abuse Council.

There will be a pre-festival party Wednesday, July 7 at 8 p.m. at Bent River, 512 24th St., Rock Island. Bent River will tap their “Dawn and On Festival Ale” and host a Wednesday Night Open Jam featuring The Channel Cats, with featured artist Ariel McReynolds and special guests The Wontu Trees.

As always, feel free to bring your instruments if you wish to sit in on the jam. The Wontu Trees will play from 9 p.m. to 10 p.m. and McReynolds at 10 p.m. DAO Festival Ale is a Session IPA , perfect for a summer music festival, brewed with lotus and mosaic hops. It boasts low bitterness, with flavors of tropical fruit, mango, pine and citrus imparted by the hops.

Tickets for the July 10 fest are $20 at the gate and at select presale locations to be announced. Children 12 and under are free. Tickets may also be purchased online at http://bit.ly/DAO2021Tickets.

For more information on the event, visit http://dawnandon.com/.