On Tuesday, Aug. 3rd, Cambridge’s College Square Park will be the site of a summer theater performance of Craig Sodaro’s “Tom ‘n’ Huck,” starting at 7:30 p.m.

The play is the first performance of a summer community theater program, thanks to the support of the summer AIM Program through the 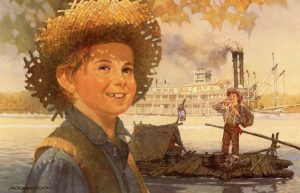 The family-friendly play, “Tom ‘n’ Huck,” based on Mark Twain characters, will be presented for free in Cambridge Tuesday at 7:30 p.m.

Henry Stark Bureau Regional Office of Education. The AIM Program has been a part of Cambridge Schools for over five years, but this is the first public play. Admission is free to the public.

The story revolves around the irrepressible Tom Sawyer, his best buddy Huck Finn, and many other beloved characters created by Mark Twain come to life in this all-American adventure. When the two boys are accused of stealing Becky Thatcher’s gold necklace, and with even Aunt Polly and the Widder Douglas doubting them, Tom and Huck decide to take off for the swamp.

The real culprit, Herman Cornwallis, is delighted to see them run away so he can have more time with Becky. In the swamp the boys meet up with Mary Meechum, thought to be a witch. The three accidentally overhear the suspicious Slade sisters planning to scam the town and witness the sisters’ partner kill someone who wanted in on the action. Together Tom, Huck, and Mary save the town and regain their good names.

In the Cambridge play, Tom Sawyer is played by Evan Akers, while Huck Finn is played by Blake Janson. Chloe Finch plays Becky Thatcher while Jack Brown takes the role of Tom and Huck’s nemesis Herman Cornwallis. The cast is a conglomerate of students from Cambridge and Geneseo Schools and members of the community of Cambridge.

The performance is at College Square Park, off West Center Street and West Court Street in Cambridge. There will be a pie and cake raffle to raise funds for future performances.

Jonathan Turner
Jonathan Turner has been covering the Quad-Cities arts scene for 25 years, first as a reporter with the Dispatch and Rock Island Argus, and then as a reporter with the Quad City Times. Jonathan is also an accomplished actor and musician who has been seen frequently on local theater stages, including the Bucktown Revue and Black Box Theatre.
See More Articles From Jonathan Turner
Advertisement
Tagged: cambridge summer community theatercambridge theaterchildren's theaterfamily eventskids theatertom n huck