an entire race, and the hopes and dreams for a further revitalization of a city’s center.

Dozens of local leaders, business people, artists and residents gathered along 20th Street downtown to celebrate the gorgeous mural inspired by a Rock Island High School student’s award-winning artwork, which also served as the official kickoff to this year’s Alternating Currents festival Aug. 19-22 in the Quad-Cities.

The art was spray-painted recently on the south side of 313 20th St., Rock Island, of the former Lucky Shamrock bar, done by Rocky junior Riley Jones, 16, in collaboration with professional muralists Dana Harrison (Limone) and Brandon Warner (ASPHATE).

The new mural is an adaptation of Jones’s artwork originally titled “Black Pride,” which also was

displayed at Thursday’s event, held by the Quad Cities Chamber and Quad City Arts as part of Alternating Currents. A winner of the 2021 Congressional Art Competition, the original piece was selected by U.S. Rep. Cheri Bustos (who represents Illinois’ 17th District) to be displayed at the U.S. Capitol this summer.

“It’s amazing, because it’s not only supporting a young, talented artist in our community. But it really furthers the conversation around racial equity and racial justice in the Quad-Cities. And it’s part of a larger revitalization project in downtown Rock Island. 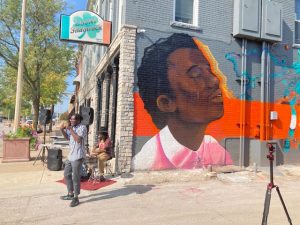 Aubrey Barnes performed as part of the Thursday unveiling of the new mural coordinated by the Quad Cities Chamber and Quad City Arts.

“We’ve seen in other communities that murals can really help brighten dark spaces in downtowns, and generate more foot traffic,” Cullen said. “It also gives more attention to other areas that weren’t noticed previously. That’s what we’re trying to do here. In the process since this project began, it’s totally encompassed everything we’re trying to do in revitalizing downtown Rock Island. It’s encouraged more investment in this area, this alleyway and an adjacent vacant lot – being able to attract one new business to one of the storefronts here.”

This project marks the launch of a new mural program in Downtown Rock Island being led by Quad City Arts and the Chamber through its new partnership with the City of Rock Island.

“A project like this – he and Dana probably could have knocked out in a day or two,” Kevin Maynard, executive director of Quad City Arts, 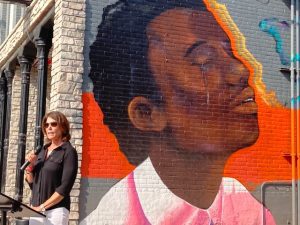 said of ASPHATE, who’s based in Des Moines. “But he spent a little over a week here in the community, primarily to mentor Riley and teach her a new skill. One of the interesting things to see here was, all of this was done by spray can. A lot of the murals we see around the Quad-Cities have been done with paint brush. It was neat to see the process of how it came out. It’s really impressive.”

“This is kind of the first step toward a revitalization of downtown Rock Island,” Maynard said. “It is the first step in using art to bring people to our community, and really lift up our community. Rock Island has been known as The Arts & Entertainment District of the Quad-Cities. That’s a moniker we hold very proudly. Jack said he wanted to solidify that, and I said, we’re here to help you. Let’s make that happen.”

Dana Harrison (Limone) is a Jefferson, Iowa, resident, who started writing graffiti in 1996 in his hometown of Fort Dodge, Iowa. Dana studied under the late Sazko from Hamburg, Germany. 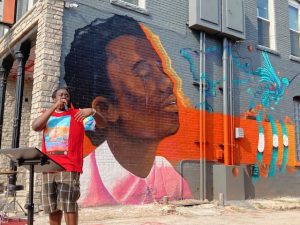 With almost 25 years of mural experience, Dana’s murals can be found on the Market House in Iowa City, and in Des Moines at the Edna Griffin building, the 10th Street bridge, Platinum Kutz, and two University Avenue transit shelters. Harrison and ASPHATE are members of the nationally-recognized Scarce Elementz Crew, a graffiti-based muralist crew, founded and based out of Southern California and Arizona.

ASPHATE is a Des Moines native and a graffiti artist who has created murals in Des Moines, Ankeny, Phoenix, Denver and other cities. 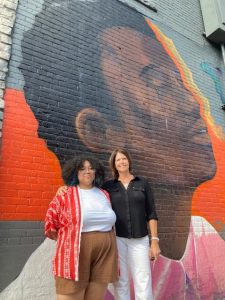 hopeful than my original image, but I still like it and my message is still there. For you to experience that transition here, where you go from creating something to how you receive your own end product and let us be a part of it, I just want to say thank you.”

Riley said her painting of a young Black man crying represents “being a Black person, seeing us being murdered on the street.”

The mural on the building changed and expanded beyond her original work to reflect hope and “continuing on our path and surviving,” she said. Of the two artists she worked with, Riley said she most learned just how to paint with a spray can and would love to do more.

“There’s a lot of places,” Bustos told her of potential mural spots. “I’ll tell you what, with your talent, there’s probably a lot of people that would say, hey Riley, give it a try.”

“We’ve been able to choose the best artwork by students from a 14-county, 7,000-square-mile Congressional district,” the Moline Democrat said. “Think about all the high schools in this 14 counties – 150 towns make up this Congressional district. Every year, we get a number of great pieces of art that are submitted.”

While the public is allowed to vote on the student entries, Bustos judges those that get the most votes. She chose Riley’s piece because she admires art that has a message. “When I saw this, I knew there had to be a story behind this piece of art,” she said. Bustos always calls the winners, and chooses runners-up and displays those artworks for her district and D.C. offices.

Riley’s painting will be displayed in the walkway that goes from the Congressional Office Building to the U.S. Capitol, she said. 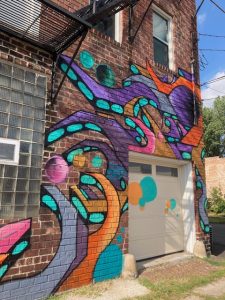 Another spray-paint mural was done by ASPHATE on the side of Rock Island’s Ragged Records building.

“That’s the walkway we go down every time we’re called for a vote,” Bustos said.  “Before we get to the House floor, we walk through the area where Riley Jones’ artwork is going to be displayed for the next one year.”

Before she picked the winning work, the Congresswoman didn’t know that Riley’s father is Jerry Jones, executive director of the Martin Luther King, Jr. Community Center in Rock Island, whom she’s known for years. “Please tell him, I didn’t choose you because of our pre-existing, wonderful relationship,” Bustos recalled telling Riley.

“The other thing she gets as part of this, she gets two tickets to fly out to Washington, D.C., where we will wine and dine her, and show her exactly where her artwork will be hung for literally millions of people to see over the next year. This is a big deal, Riley Jones.” 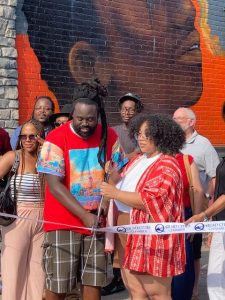 Riley Jones gets ready to cut the Quad Cities Chamber ribbon with ASPHATE (left) at a mural unveiling Thursday in downtown Rock Island.

“It looks pretty fantastic,” Ald. Dylan Parker said of the alleyway mural. “Downtown Rock Island is a really good example of little pockets of magic, and I see our job is to bring people through downtown and show them where the pockets are, that they may not know. And this one of ‘em.”

“I remember when this was the Lucky Shamrock and having fun there,” he said of the bar that’s been closed for at least a dozen years. Matt Stern owns the building and has been redeveloping it, including exposing the old iron pillars in front. There are three commercial spaces on the ground floor, and the middle one has been leased to Refined Fit Lab, a fitness center/studio planning to open this fall. “It’s really cool,” Parker said.

(You can WATCH a short video on the new mural’s creation at https://www.facebook.com/refinedfitlab.) ASPHATE also painted another new mural the same week he was in town, nearby on the brick side of the 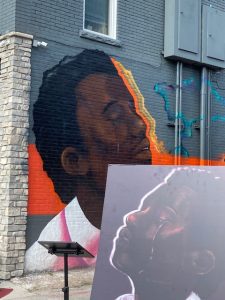 Riley’s original “Black Pride” painting (which won the 2021 Congressional Art Competition) in front of the expanded outdoor mural on Thursday.

Cullen said the goal is to identify more downtown locations and raise more money to do more murals. “We’ve got some exciting things in the works,” he said, noting there’s no specific number of murals envisioned per year. 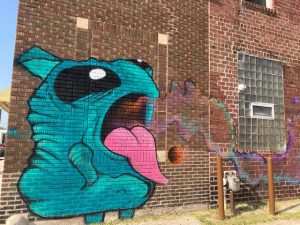 Another spray-paint mural was done by ASPHATE on the side of Rock Island’s Ragged Records building.

After the event, Visit Quad Cities president/CEO Dave Herrell tweeted: “Powerful and meaningful kickoff to #AlternatingCurrentsQC. Public art that is thought provoking and challenges you to improve is always compelling for me.”

Thursday’s ceremony featured music by DJ Cat Dady, and a spoken word performance by Aubs & Wes Julien. The unveiling launched Alternating Currents, a music, film, comedy and art festival scheduled to be held this weekend at more than 30 downtown venues in Davenport, Rock Island and Moline.