BREAKING: Organizers for the Dawn and On has announced plans to return to Rock Island’s Schwiebert Park for their 6th Annual Music Festival on Saturday July 10.  Last summer’s festival was ultimately cancelled due to COVID-19.  This will mark the fest’s second year at Schwiebert after the 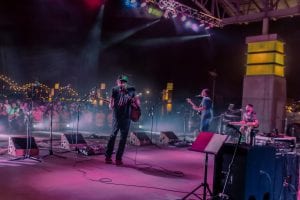 Festival Co-founder and Marketing Director Mike Mathews is excited to be able to move forward with a 2021 event.

“It’s great to get back to some normalcy.  Our first year at Schwiebert was amazing so we’re looking forward to picking up where we left off.  The park is nice and roomy so folks will be able to spread out.”

Although the talent lineup has not yet been announced, Mathews feels it could be one of their best yet.

“There’s still not a lot of touring going on, so we’ve had good luck in terms of availability. We’ve had to raise the talent budget a bit, but that’s sort of par for the course for us.”

Mathews expects the official lineup and ticketing information to be announced by the end of April.

With its roots in jam music, the festival’s lineup has traditionally featured local and national performers with a mix of rock, funk and bluegrass.  The Dawn will serve as co-headliners this summer as well.