Are Shows Like ‘Dahmer’ A Disgusting Glorification Of Serial Killers, Or Merely Sick Entertainment?

Imagine you went out on a date with someone.
You went back to their place.
You had a couple of drinks.
You decided to turn on some Netflix.

You asked them what they wanted to watch.
They looked you straight in the eye.

But apparently there are many other people who don’t share my feelings and opinions.
Looking at the number of folks posting about watching “Dahmer,” and other serial killer programs, it’s gotten to be extremely popular.
And, again, I just don’t get it.
Is it the subconscious, vicarious thrill of being scared, particularly being scared of all the weirdos and creeps who are out there in the real world? Is it the subconscious, vicarious thrill of imagining yourself in that scenario, and breaking free and escaping? Or is there just something else more primal, the attraction to that fear of death, or the power to kill? I don’t know. I don’t feel it, I don’t get it.
As “Dahmer” has soared to strange popularity, more people have written about it and questioned why.
Some people have criticized the creators of it and other shows of that ilk for romanticizing serial killers by casting attractive male actors in the lead. I can certainly see that criticism. Even the most handsome of serial killers is no great shakes in the looks department, and Dahmer himself was a creepy looking guy who wore molester glasses, so I fail to see where that screamed for dreamboat actor treatment. I think
there’s something to that criticism. After all, I can’t imagine people being thrilled if some young hot actor like Harry Styles was cast as a mythical young hot version of Adolf Hitler. 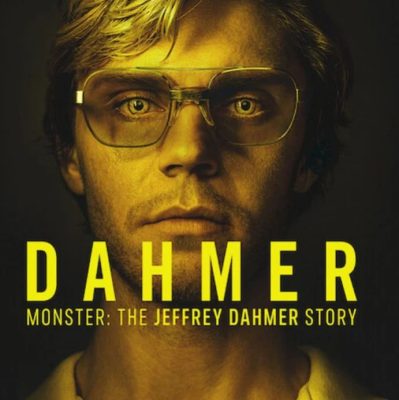 Other people have criticized the folks watching it in addition to the creators, saying that its popularity is just encouraging other freaks looking for attention to be serial killers, and that the popularity of it is throwing salt in the wounds of the families of the victims of Dahmer and others being given the Hollywood treatment for their depraved murders.
Again, I can see their point. If you were related to one of the victims, would you really want to see this being dragged out and given the Hollywood treatment, poking at your emotional scars? And for what purpose? Was the world really so bereft without this piece of entertainment? Does it really add all that much to the creative conversation that it had to be made?

The fact of the matter is, there’s a limited amount of money and production time available to Hollywood and all creators’ studios in any given year. Why utilize any of that in glorifying serial killers? Why even come close to showcasing serial killers at all in such a way?
But, again, I don’t get it.
Those shows hold no appeal to me.
But, they do hold a lot of appeal to other people.
The same thing goes for murder houses.
There are a number of murder houses out there, including some in Illinois and Iowa. Places where there were gruesome and infamous killings. People killing their families. Random freaks breaking in and killing people. Serial killers slaughtering them.
And for some reason, some of those houses have been refurbished and opened to the public to visit, view, and in some cases, stay overnight.
Again, I fail to see the appeal. I can think of few places I would less like to stay than a house where people were brutally killed. Not because I believe in ghosts or anything, but just because it’s a disgusting and reprehensible act and I would have no interest in being in a spot where it occurred.
But, again, some people are really into it.
I don’t get it.
I know there are a lot of different people in this world, who have a lot of different opinions and preferences, and, same as I want people to leave me alone to pursue my own likes and preferences, I give people a wide berth in regard to theirs as long as they don’t negatively impact me.
But, same as I wouldn’t want to eat anchovies on a pizza, I wouldn’t want to stay in a murder house. Or watch “Dahmer.” Especially at the same time as eating anchovies on a pizza, or anything on a pizza.
But, to each their own, I guess.
Except for people who like the Eagles. That band sucks.