Abbie Metz, a Black Hawk College grad, has been tapped to lead the team that will begin competing in Fall 2021. On Aug. 1, she will become the Braves’ first-ever women’s soccer head coach.

“I look forward to working with her on building the program from the ground up,” said Arnie Chavera, interim athletic director.

Metz currently is the academy director and head coach for PLD Sports – Sporting Iowa East at the TBK Bank Sports Complex in Bettendorf. She has nearly two decades of experience coaching both college and high school teams in the Quad Cities.

“We have many talented soccer players on this side of the river who now have the option of competing at the junior college level while working toward their degrees,” she said. 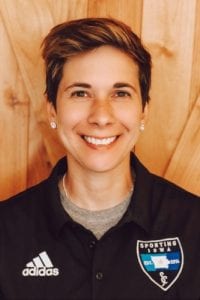 Coach Metz plans to emphasize academics with her student-athletes.

“I think it is important to remind these players the real reason they are at Black Hawk College, and that is to get their education while being a part of the women’s soccer program,” she said.

“I will expect a lot out of them on the field and in the classroom,” Metz said. “While soccer is fun and a life in itself, getting them prepared for the workforce is my goal.”

Metz graduated from Rock Island High School in 2000 and was a member of the All-Metro and All-Big Six teams her senior year. She returned as a volunteer coach for Rocky’s boys and girls soccer teams from 2001-04.

After earning an Associate in Arts degree from Black Hawk College in 2005, she transferred to St. Ambrose University where she played soccer for two seasons while earning a bachelor’s degree in sports management.

She was the junior varsity coach for SAU’s women’s soccer team during the Fall 2007 season then the head varsity coach for Alleman High School’s girls soccer team for the 2008-10 seasons. She continued to volunteer as a soccer coach at Alleman from 2012-16 and also coached Moline United girls teams from 2012-14 and Quad City Elite girls teams from 2015-17.

“Abbie has a great amount of passion for soccer and she has grown tremendously over her coaching career,” Chavera said.

“Her playing experience at St. Ambrose and coaching relationships will serve her well in local recruiting,” he said.