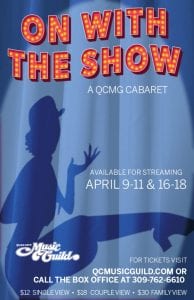 “On With the Show” is available to stream until April 20.

Greatly anticipating Quad City Music Guild’s first, long-awaited entry into online entertainment (13 months into the Covid-19 pandemic), I both did and didn’t know what to expect from the new “On With the Show” cabaret. 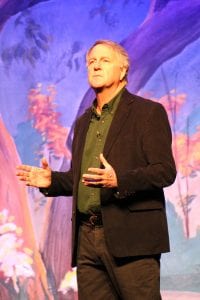 I knew it would be about an hour long; include several originally cast members of “The Secret Garden” (which has yet to be seen on the Guild stage); would be filmed from the Prospect Park theater, and include photos from past Guild productions.

What I did not know that it would be so comprehensive (including so much detailed history about the beloved 72-year-old cultural institution), with so many photos, so many interesting tidbits, and so professionally produced – coordinated and narrated by the wonderfully talented creative director, Christina Myatt.

(Full disclosure: I was assistant music director and accompanist for 2020’s “Secret Garden,” which was first canceled due to Covid two weeks before its late March opening, and then it was canceled again for spring 2021, 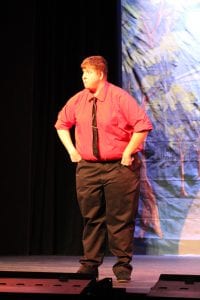 Luke Vermeire singing “Get Me to the Church on Time.”

even as the rest of last year’s season will be able to be done this year. I was also asked to play piano for the filmed cabaret, but our family is being super cautious about the virus, and I had to decline.)

Even though there are none of the stunning Lucy Simon songs from “Secret Garden” in the new 41-minute Music Guild compilation, there are several strong, poised performances from eight of its original Guild cast and crew. There are 13 total singers in the cabaret – who also unexpectedly gathered as a group for an affecting closing number.

The video – like Music Guild itself since its June 1949 start – feels like a warm labor of love, the perfect product of many volunteers. 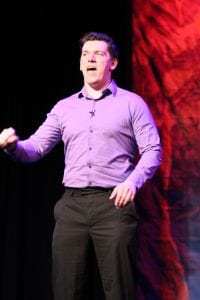 Taylor Bley performing “This is The Moment.”

longtime Guild veteran (and former board president) Kevin Pieper said Friday morning by e-mail. “I, and other volunteers have been spending time, during the shutdown, doing repairs and maintenance to keep busy and to feel like we’re doing something related to the theatre. 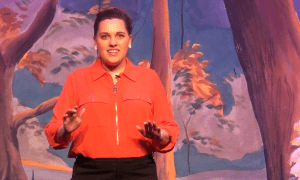 many over its long history,” said Pieper, who reverently sings “With a Song In My Heart” for the cabaret with fellow veterans Pami Triebel and Harold Truitt.

“The blending of Quad City Music Guild history with the new performances provides to all those viewing it a representation of the huge impact QCMG has had on our many hundreds of participants and many thousands of patrons during our 72-year existence,” Pieper said.

“Many area residents have no idea how long QCMG has been working to provide this wonderful outlet to all members of the community to showcase their talents and interests in musical theatre,” he said. “This program provides that glimpse and I hope will inspire more community members to join in the experience.”

Yes, the online cabaret (which went live Friday morning) does offer that illuminating glimpse of the tremendous impact Guild has had over the decades, and the many changes seen at Moline’s Prospect Park. 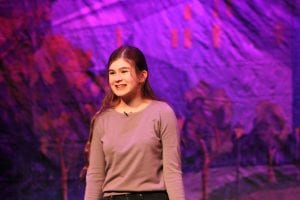 Shay Schehl singing “I Enjoy Being a Girl.”

operetta, Victor Herbert’s “Sweethearts” in 1949, performed in an open-air pavilion, with audiences on wooden benches on a dirt floor.

In the ‘50s, there was disagreement about the future direction of Guild, and the tradition of Broadway shows in the park won out. In 1957, “South Pacific” set the one-night attendance record with 1,157 patrons (today’s theater holds 535 seats).

We learn how the theater was improved and expanded over the years, with sound systems (body mics first started in 1994), the orchestra pit, and the largest renovation done in June 2000. The $1.4-milion project added the 4,800-square-foot lobby, restrooms, a new roof, ticket office, 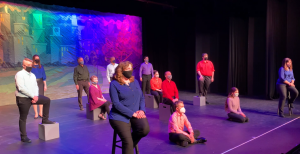 The group finale in the cabaret is “Happiness” from “:You’re a Good Man, Charlie Brown.”

Guild since then added spring and holiday shows to its traditional three-show summer season, and has greatly expanded the diversity of its repertoire. A new costume shop and scene shop were added in 2014, and in 2015, it welcomed its 750,000th patron. 2020 was the first year in 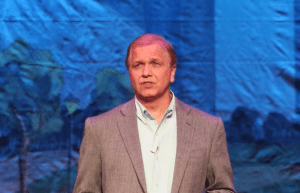 Music Guild’s history that it canceled a season, due to the Covid pandemic.

With some behind-the-scenes stories interspersed between the live musical numbers, we also learn how many performers achieved national recognition after having Guild on their resume. A few –

Satisfying entertainment past and present 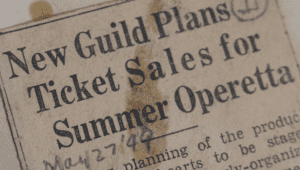 A May 1949 piece in The Dispatch announced the premiere performance of Music Guild.

performers all shine on stage. 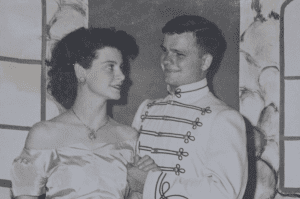 A scene from Music Guild’s first show, the operetta “Sweethearts,” in June 1949.

Shay Schehl in “I Enjoy Being a Girl” and Jordan Dodd in “Gary, Indiana.”

Other excellent numbers from “Secret Garden” veterans are: the young set designer Luke Vermeire in the very playful, boisterous “Get Me to the Church on Time”; Mark McGinn’s inspiring, sturdy “Impossible Dream”; Taylor Bley’s terrifically powerful “This is the Moment,” with a breathtaking last note; and Kevin Snell’s confident, exhilarating “The Spark of Creation.” 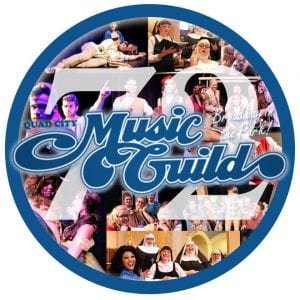 Guild’s planned 72nd season at Prospect Park was canceled in 2020.

While the entire “production” is presented with the utmost affection and care, the finale really hit me the most – the group number “Happiness,” from “You’re a Good Man, Charlie Brown.”

Unlike the rest of the cabaret, each of the 13 performers wear a mask while singing together. And the moving song (which had me fighting back tears) is also accompanied by several Guild 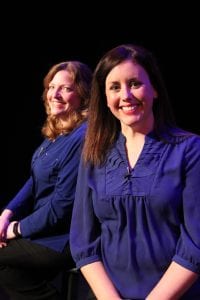 Sheri Brown Olson and Jennifer Sondgeroth sing “Sisters” in the new “On With the Show” cabaret.

photos of past shows and behind-the-curtain looks in the pit, backstage, getting ready with costume and makeup.

While I would have hoped Guild could have taken other opportunities to present more online entertainment over the past year, they justifiably sing their own praises in this promotional-style video. As Pieper said, the many hundreds of volunteers who have worked tirelessly to make Music Guild what it is deserve so much credit.

They’re literally not unsung heroes, but they are admirable heroes who should be sung about more often. It’s so true that you don’t realize how much you appreciate something until it’s gone, and we’ve lost so much over the past year.

Fortunately, Guild will return with a full production of “Monty Python’s Spamalot,” to be streamed in June. 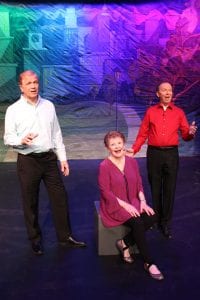 Kevin Pieper, Pami Triebel, and Harold Truitt singing “With a Song in My Heart.”

Eighteen months after staging their last full production, Music Guild present a filmed version of “Spamalot” with no in-person audience, to be streamed online three times. 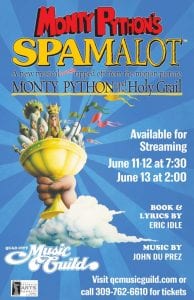 your $12 (per person) view by clicking HERE. Patrons with existing tickets to “Spamalot” that were not refunded from last year will automatically receive a link to view this show via email.

Live productions of “Mamma Mia” and “Matilda” will return to the Prospect Park theater (1584 34th Ave.) as scheduled for July and August.

“Of course, should the public health situation or state guidelines change, we will continue to follow them,” Music Guild has posted, noting that masks will be required for all patrons and volunteers.

The “On With the Show” cabaret – with expert video design done by Beth Marsoun — will be available to stream through Tuesday, April 20 at 5 p.m. You can get single-view tickets for that (for $15 including tax) at www.showtix4u.com/event-details/46285.

Jonathan Turner
Jonathan Turner has been covering the Quad-Cities arts scene for 25 years, first as a reporter with the Dispatch and Rock Island Argus, and then as a reporter with the Quad City Times. Jonathan is also an accomplished actor and musician who has been seen frequently on local theater stages, including the Bucktown Revue and Black Box Theatre.
See More Articles From Jonathan Turner
Tagged: beth marsounfredrick swansonharold truittkevin pieperkevin snelllucy simonluke vermiereMark McGinnMusic Guildonline cabaretpami triebeltaylor bley