Home » Articles » Things To Do » ‘The Secret Garden’ Suffers Another Death

‘The Secret Garden’ Suffers Another Death

Jonathan Turner lives in Bettendorf and was a longtime reporter for The Dispatch and Rock Island Argus. He holds degrees in music from Oberlin College and Indiana University, and served as assistant music director for Music Guild’s production of “The Secret Garden.” Jonathan recently joined the QuadCities.com team and will review theater and performance and offer commentary and reporting on the local arts scene. His first story for our site details his experience with “The Secret Garden,” which was among the many local arts offerings devastated by the cancellations due to the coronavirus.

“Bone-crushing loss” — that’s how our inspiring Music Guild director, Jeff Ashcraft, recently expressed a theme of the stirring spring production, “The Secret Garden,” which we were to open March 27 at Moline’s Prospect Park Auditorium.

He recounted the loss of a brother (who had Down syndrome) when he was in college, as it relates to a frequent subject of loss, grief and death in the haunting, breathtakingly beautiful musical — which premiered in 1991 and is based on the classic 1911 book of the same name. 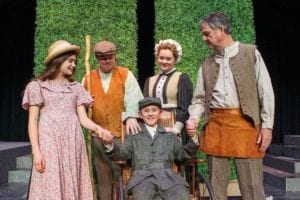 While he has many directing credits to his name, and I have played piano for many area musicals over the years, this was our first Guild experience, in the 71-year history of this Q-C cultural institution. While Jeff had been planning since last fall on bringing the show (with the new season of spring) to life, I didn’t get involved until I accompanied auditions in early January, as music director Keith Haan (who’s organist and choir director at the Davenport church I play) asked me to be his assistant, and show accompanist.

As many of you may know, all our scheduled performances were cancelled March 13 in response to the global coronavirus outbreak, which has brought much normal life to a standstill around the world, including cancellation of many Quad-Cities events.

Five weeks into our grueling, productive rehearsals, everything came to a screeching halt, depriving us of an outlet to display the bountiful bloom of what we had planted, nurtured and seen grow before our eyes. When we were notified by the Guild board’s leaders (on the Guild stage), many of the cast and crew (myself included) struggled in vain to hold back tears. Talk about a bone-crushing loss.

These actors and singers are some of the most talented in our area, and they were lending their time and talents (for free), out of the goodness of their big hearts and tremendous passion for this great art form. I shared their deep frustration and disappointment to not be able to give birth to this child they had conceived and labored over. I recalled Jeff’s commitment to quality from the first potluck we had in the theater lobby — he told us he was determined to not just produce a good show, but a great one, which audiences would never forget. 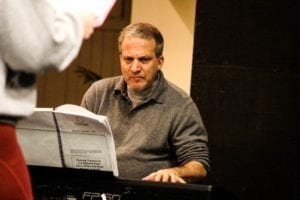 In his director’s note (for a program that was never printed), he wrote this was “an astounding team of talented actors, musicians, technicians, and all types of devoted theatre artists who have committed countless hours of energy to bring you this beloved story of spirit-crushing loss, enchanted hope and soul-saving redemption.”

“The Guild is remarkable at making sure that artists have the creative freedom to express their art in a safe and truly caring environment,” Jeff wrote. “The systems and volunteers that make this theatre operate are not only exceptionally well run, but are impressive in their passion, efficiency, and consistent support and encouragement.”

The board said it agonized over making its decision to cancel (and not just postpone), out of safety concerns and recommendations from health officials, and Jeff later told me: “I’ve never seen anything like this. Crazy times, but QCMG has been so compassionate and professional.”

In order to offer some closure to this hole in our hearts, we had planned to do a first run-through (as previously scheduled) with our orchestra on the night of March 16, before a very limited audience — only the songs, without blocking, but with costumes, sets and lighting (these three were also beautiful). However, on Sunday night, the board sadly decided to cancel that as well. Another soul-crushing loss. 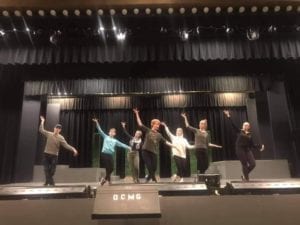 Personally, this hit me harder than perhaps others, since I had just been laid off from my job on March 6, as arts and entertainment reporter for the Dispatch/Argus and Quad-City Times — a perfect job for me, as I am trained in music and have played piano since I was 5. After 25 years writing for the D/A, I was among the latest round of four more newsroom cuts. I was suddenly, shockingly adrift, lost.

As in previous times of trouble, I have found salvation, comfort and joy in music. And like other musicals I’ve been involved with, the close bonds you share with fellow stage misfits are wonderful. I made a whole new set of friends.

As it often does, my mind went back to 40 years ago this month, when I got to play for my first full musical (as a high-school sophomore), Rodgers & Hammerstein’s gorgeous, immortal “Carousel.” Like “Secret Garden,” it was a transcendent, life-changing experience. Its story also concerns death, a ghostly spirit and a child,

Billy Bigelow, the hero (and ne’er do-well) of “Carousel” dies in the second act and in order to get to heaven, he invisibly attends his daughter’s graduation, hoping for one last chance to help his daughter and redeem himself. “You’ll Never Walk Alone” is involved.

My hero, legendary Broadway composer Stephen Sondheim, attended a pre-Broadway performance (in New Haven, 1945) with Hammerstein’s wife, Dorothy, and at 15, he sobbed into her fur. “The Secret Garden” has that same mystical, heart-wrenching pull. 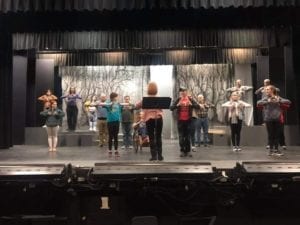 Keith Haan (who shares Jeff’s outstanding commitment to first-class performance) said after the cancellation: “I thought about how emotional the music was, even when no one was singing the lyrics. I thought how lucky I was to witness so many magical rehearsal moments with the cast.

Keith – who similarly collaborated with Jeff in 2015’s “Jesus Christ Superstar” at Countryside – noted: “It was really exceptional the way he drew emotion and understanding out of each individual actor. I know he was frustrated that he didn’t have more time to do that with the ‘Garden’ cast. Watching him question actors and seeing the actors delve deeper into their characters was magical. It was obvious that our people had done their homework. They had taken the time to think about their characters and were putting that understanding into their performances.”

“I find it so exciting to witness an actor achieve a higher level in their work. Sometimes it’s being able to hit an awkward high note or sing a particularly difficult phrase that they had not been able to do. Sometimes it’s being able to move and be moved by achieving a greater understanding of their character. Other times it may simply be able to get through a scene off-book. Or have the satisfaction that they can sing, speak and move or dance at the same time.” 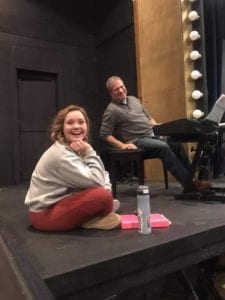 “There is nothing like having an audience behind you, following your every move, listening to every word,” Keith added, noting he simply was thrilled by the rehearsal process.

This production was even more special for the retired St. Ambrose music professor, since he reunited with Lauren VanSpeybroeck. She played the pivotal Mary Lennox in “Garden” at age 10 in a 2006 SAU benefit for the Children’s Therapy Center, and Keith played Ben.

Lauren — who at Guild was to be the upbeat, inspirational Martha (a spunky chambermaid) – said Mary was one of her favorite roles, “so this show holds such a special place in my heart. I read the book and watched the movie at my grandma’s house probably a hundred times when I was little. ‘The Secret Garden’ is such a beautiful story.”

With book and lyrics by Marsha Norman, and music by Lucy Simon (older sister of Carly Simon), the musical is set in the early years of the 20th century, and Mary – an English girl born and raised in India — is orphaned by a cholera outbreak (another eerie parallel to today) when she is 10.

She’s sent to Yorkshire, England, to live with relatives whom she has never met. Her own personality blossoms as she and a young gardener bring new life to a neglected garden, as well as to her sickly cousin and uncle. Mary’s aunt Lily had died years before, but her presence permeates much of the story and show. Lily’s widower is Archibald Craven, who’s overcome by grief, and the profoundly moving arc of the show brings Mary and Archie, her cousin Colin, and the spirit of Lily, together and looking toward a bright future. 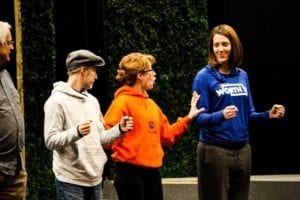 There’s so much more to the story, but actors Shay Schehl (Mary), Amelia Fischer (Lily) and Kyle DeFauw (Archie) were well on their way to making this a truly unforgettable show. Plans are to be determined on how to bring it back to Music Guild.

Remember amid all the cancellations that there are so many dedicated artists and performers whose livelihood and often reason for being depend on their shows. It’s not simply a loss for the venues and audiences.

Maybe in April, with warmer weather, this virus will “magically disappear.” But for me, the magic has already disappeared and that’s a crushing loss I’ll not soon get over. 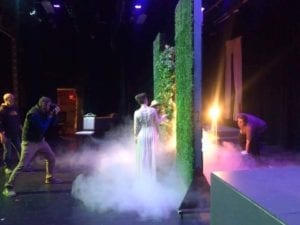 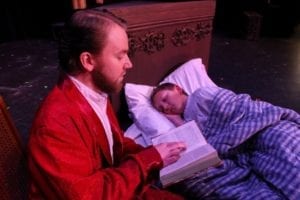 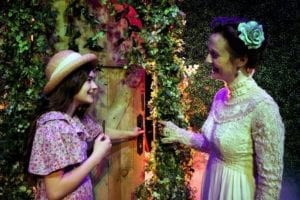 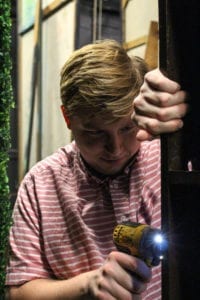 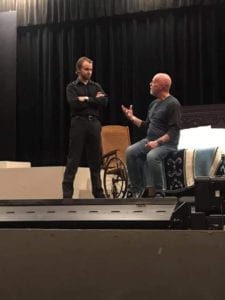 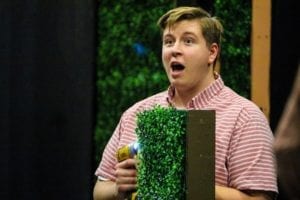