The year 2020 may not be remembered fondly by most people, but it’s an important year for Royal Neighbors of America, Living Proof Exhibit, and anyone who cares about women’s rights.

It’s the 125th anniversary of Royal Neighbors (the nationwide, Rock-Island based fraternal benefit society), the 10th anniversary of Living Proof (a Q-C nonprofit that uses the therapeutic nature of arts to help people touched by cancer), and the 100th of the ratification of the 19th Amendment to the U.S. Constitution, giving women the right to vote (honored in a current Putnam Museum exhibit).

All three area organizations are linked, in that RNA – a major sponsor of the Putnam exhibit on women’s suffrage — recently won the small-company award for best video in the Boston College Center for Corporate Citizenship’s International Corporate Citizenship Film Festival.

Its film, less than three minutes long, highlights LPE, one of 10 winners last year of a $10,000 grant from RNA’s “Nation of Neighbors” program. (Watch it at https://bit.ly/2ysL9JV)

This year, more than 55 companies submitted videos that showcased efforts that varied from ocean clean-up to the impact of employee resource groups, according to the college center website, at ccc.bc.edu.

“In our world of physical distancing, these videos remind us of the importance of social connection — even in an increasingly virtual world,” it said. The 12th-annual festival winners “showcase international initiatives that illustrate why corporate citizenship matters so much. Because — through creative partnerships, innovative solutions, and powerful programs — corporate citizenship creates the world in which we want to do business and the world in which we want to live.”

Julie Robinson, RNA’s public relations director, said Thursday that this is the first time that it’s entered such a festival in the 125-year-history of the women-led company, that offers life insurance and other financial products. 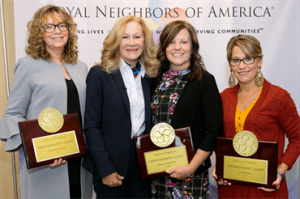 It joined the Boston College center last year “to try and stay abreast of things going on in the field of corporate citizenship,” she said. The film festival was a perfect fit to reflect “Nation of Neighbors” and how women are helping others in the communities which RNA serves. The company has 215,000 members in 40-plus states, including 77 Q-C chapters (with 3,300 members), and 135 total employees (including 120 based in Rock Island).

“We are very excited to earn this recognition and to give a greater platform to Living Proof,” Amy Jones, director of philanthropy for Royal Neighbors, said Thursday.

“Our organization’s mission is to provide women and their families with needed life insurance and annuity products and to also make a difference in the communities where our members live,” RNA president/CEO Cynthia Tidwell last November in announcing the winners of $100,000 total Nation of Neighbors grants.

“Nation of Neighbors is our signature women’s empowerment program. It is built on the legacy of helping women who are doing extraordinary things within their communities make an even larger impact,” she said.

“Each of these grant recipients leads a unique organization that benefits her community. They are already making a profound difference and changing lives within their area of expertise with the work that they do, and our grant will help extend that reach even further.”

Nominated by members, agents, and chapter leaders, the nationwide recipients are leaders in their community and live the mission of Royal Neighbors. More than $2 million has been given since the program launched in 2007.

Founded in 1895 (now with over $1.1 billion in assets), RNA has a unique mission of insuring lives, supporting women, and serving communities, it says at royalneighbors.org.

Crouch was nominated by Matt Mendenhall, a former Royal Neighbors employee who is now president/CEO of the Regional Development Authority.

“Our mission can expand,” she said Thursday. “Unfortunately, there are more cancer diagnoses every year, but fortunately, more cancer survivors. The grant really has made a huge difference to increase our outreach to Muscatine, and creative sessions in general.”

“Especially now with the pandemic, we’re adjusting and adapting our programming, to bring the healing power of the arts to people,” Crouch said. “The funding has such a huge impact on the organization.”

In the RNA video (made by Phil Dingeldein of Rock Island-based dphilms), she explains after she was first diagnosed with breast cancer in 2008, she painted birdhouses and gave them away to newly-diagnosed breast cancer patients.

Crouch discovered that by painting and creating, it was an invaluable way to relieve stress, “and by doing something for others, it just makes you feel better about yourself,” she said in the video.

Nation of Neighbors recognizes work such as hers for “women making a difference in the community,” Crouch said, noting LPE serves men and women, since cancer affects everyone.

“We’re not only working with people who have cancer, we’re working with family members,” she said. Currently, LPE participants are about 80 percent women, she said.

While Living Proof started serving those affected by breast cancer, it quickly grew to serve those impacted by any cancer. In 2019, breast-cancer deaths represented just 6.9 percent of the more than 600,000 cancer deaths in the U.S., according to the American Cancer Society.

Taking on cancer with paint, wing and an opera

The RNA video also features Gina Kirschbaum, a cancer survivor and five-year LPE class instructor. A Bettendorf resident, she first had stage-3 melanoma in 2008, which came back twice. A former para-educator for special-needs kids, she quit in 2013 after developing lymphedema (caused by radiation treatments). 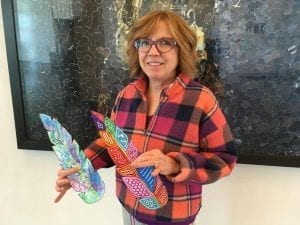 Gina Kirschbaum at the Figge.

Kirschbaum has exhibited art with Living Proof starting in 2013, and has taught art classes since 2015. “It’s very relaxing, just to get your mind off what’s going on. And the camaraderie, when people are sitting around, they have that in common,” she said earlier this year. “But you don’t have to talk about it. You can just sit and laugh.”

“From the first time I met Pam, I could tell how dedicated she is to this and it’s her life,” she said in the video. “She’s a role model for me. I would have never dreamed that I’d be doing now what I am doing, and it’s because of getting in that first exhibit and getting the confidence. Getting asked to teach and teaching classes, it’s just amazing.”

“Getting involved in something like this, it’s given me something to really live for,” Kirschbaum said.

In late January, she held a free workshop for people impacted by cancer, to create decorated paper feathers that she later assembled into a six-foot-long wingspan. That will be displayed next February in the lobby of the Bartlett Performing Arts Center at Moline High School, where the new opera “Karkinos” – commissioned by LPE and the Quad City Symphony Orchestra – will have its premiere.

For “Karkinos,” Kirschbaum painted a whimsical, six-foot circular sunset on the water, to be on stage. The feathers in the lobby will represent the collective strength of cancer survivors, she said. The opera (by Augustana’s Jacob Bancks) aims to provide hope and celebration for those with cancer and all who love them.

LPE’s work has special relevance during the global coronavirus crisis, where most people are confined to their homes to slow the spread of the disease, which has killed nearly 75,000 Americans as of May 7. 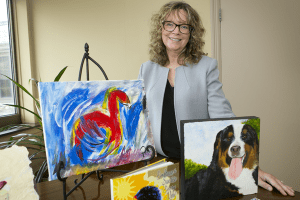 The new video helps spread the word, and “allows us to be able to reach out across the nation,” Crouch said. “The focus is that art can help reduce stress, and can help everyone, no matter what the disease is.”

“The work Living Proof Exhibit does is fantastic,” said Robinson of RNA. “We wanted to support Pamela and her team.”

Because of Covid-19, RNA could not celebrate its actual 125th birthday on March 21, nor attend the corporate citizenship film festival (in San Francisco), which had been planned for late April and got canceled, Robinson said.

In the March issue of its company magazine at theroyalneighbor.org, RNA recommended several things you can do from home to support your community, including the current LPE project, “Make Hope Soar,” by painting birdhouses.

Other ways (descriptions from the magazine) include:

LPE seeks entries for its juried Figge Art Museum exhibit (to run Sept. 10-Dec. 6, 2020) by June 4. Painted birdhouses, which will first be displayed at the Figge and then given away, are due by Sept. 18.

The Putnam’s original exhibit, “Liberated Voice/Changed Lives,” opened in March, shortly before the museum (1717 W. 12th St., Davenport) closed to the public. Celebrating the August 1920 signing of the 19th Amendment, a touch-screen video shows how Q-C figures made the case for and against women’s right to vote, during the first two decades of the 20th century.

The exhibit – all from the Putnam’s vast collection – shows how household inventions, from the simple toaster to the more complex electric washing machine, created more free time for local women to organize in the movement, and transformed their lifestyle leading up to and directly after the adoption of women’s suffrage.

Robinson of Royal Neighbors said they hope to have an event at the Putnam in August, in conjunction with the exhibit, to discuss women’s rights and empowerment in TED-style talks.

You can take a virtual tour of the exhibit at http://putnam.org/Exhibits/Featured/suffrage.

Jonathan Turner
Jonathan Turner has been covering the Quad-Cities arts scene for 25 years, first as a reporter with the Dispatch and Rock Island Argus, and then as a reporter with the Quad City Times. Jonathan is also an accomplished actor and musician who has been seen frequently on local theater stages, including the Bucktown Revue and Black Box Theatre.
See More Articles From Jonathan Turner
Tagged: 2019 Nation of NeighborsFigge Museumliberated voice/changed livesLola RahnMissey HeinrichsPamela CrouchPutnam MuseumRoyal NeighborsRoyal Neighbors CEO Cynthia Tidwell