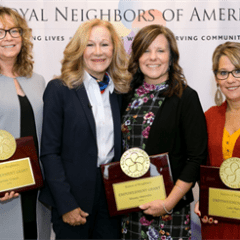 The year 2020 may not be remembered fondly by most people, but it’s an important year for Royal Neighbors of America, Living Proof Exhibit, and anyone who cares about women’s rights. It’s the 125th anniversary of Royal Neighbors (the nationwide, Rock-Island based fraternal benefit society), the 10th anniversary of Living Proof (a Q-C nonprofit that uses the therapeutic nature of arts to help people touched by cancer), and the 100th of the ratification of the 19th Amendment to the U.S. Constitution, giving women the right to vote (honored in a current Putnam Museum exhibit). All three area... Read More