The Quad-Cities is one of the top 15 places where covid cases are increasing the fastest in the United States, according to new statistics released today. 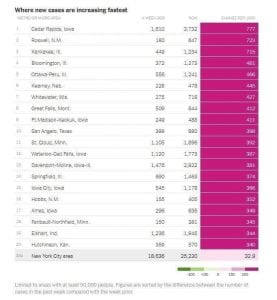 Among metro areas with at least 50,000 people, the Iowa/Illinois Quad-Cities ranks number 13 among the fastest risers, almost doubling its number of cases within the past week, from 1,476 to 2,922.

According to a report in the New York Times today, the daily average of new COVID-19 cases in the country this past week has gone up 64 percent in two weeks, hitting 116,448 today.

More than 1 million new cases have been reported in the past 10 days and the United States now has more than 10 million confirmed COVID-19 cases since the pandemic began.

Area hospitals are finding themselves being pushed beyond typical capacity and staffers and doctors are feeling the stress.

“We set our previous record high in the last ten days and doubled that in the last week,” said Dr. Kurt Andersen, Senior Vice President for Physician Operations and Chief Medical Officer for Genesis. “Where before in the summer we would be looking at maybe five or ten percent of people who came in with symptoms testing positive, now we’re over 30 percent of people who come in with symptoms testing positive.”

Genesis has had to restructure their hospital to provide care for the surging numbers of patients while also making prudent decisions in regard to keeping them together to help treatment and quarantine as well as PPE, Dr. Andersen said.

Another problematic situation for the hospital has been the growing number of people stressing out the emergency room system coming in with covid symptoms and for tests.

“We ask people to go through other options before coming to the ER, because that puts a strain on the ER and prevents people who really need it from being able to get the service as quickly as they need,” Dr. Andersen said. “We recommend that if you are having covid symptoms to first call your own doctor, or schedule a video consultation. Also there are a number of places people can go for testing. The ER is not the ideal spot to go for covid testing and we encourage people to explore other ways to keep the ER open for people who are in greater need of the resources of the ER.”

For more information, further interviews and coverage of covid cases and data in the Quad-Cities, continue to check free local media QuadCities.com.

Sean Leary
Sean Leary is an author, director, artist, musician, producer and entrepreneur who has been writing professionally since debuting at age 11 in the pages of the Comics Buyers Guide. An honors graduate of the University of Southern California masters program, he has written over 50 books including the best-sellers The Arimathean, Every Number is Lucky to Someone and We Are All Characters.
See More Articles From Sean Leary
Tagged: covid hot spotscovid spikedr. kurt andersengenesis medical centerhealthquadcities coronavirus casesquadcities covid casesquadcities covid hot spotquadcities doctors