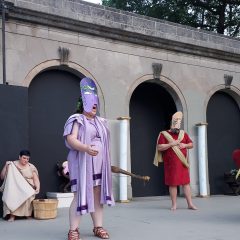 The Genesius Guild will close the 2021 season by going back to their roots with a Greek tragedy. Euripides’ Hippolytus will be staged for the last time today at 7 p.m. at the Don Wooten Stage in Lincoln Park, Rock Island. Admission is free. This performance continues a longstanding tradition. The Genesius Guild’s first performance in Lincoln Park was Antigone by Sophocles, and the group has continued to perform a Greek tragedy, in mask, each season. Genesius Guild is the only theater in the United States to make Greek tragedy in mask an annual occurrence. Hippolytus tells the story... Read More 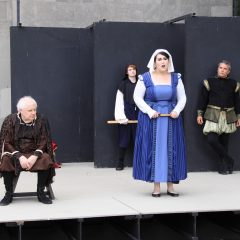 Shall I compare thee to a summer’s day? More specifically, a summer evening spent watching a performance of Shakespeare as the sun shines golden on a stone amphitheater? Genesius Guild is showing “Measure for Measure (abridged)”, which will run for two more nights on June 26 and June 27 at 7pm in the Rock Island Lincoln Park “Measure for Measure” showcased a metatheatrical experience and began by introducing the actors to the stage as themselves. Throughout the play, the actors remained visible to the audience. Such a peculiar opening invites the audience to partake in... Read More 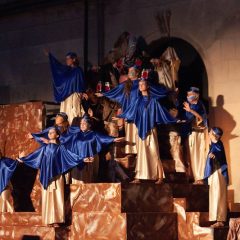 An adapted version of Shakespeare’s Measure for Measure is currently running to open Genesius Guild’s 2021 season with the next performances at 7 p.m. on June 26 and 27. All performances are held at the Don Wooten Stage in Lincoln Park, 1120 40th St., Rock Island, and admission is free. Opening weekend marks the Genesius Guild’s return to live theater after cancelling the 2020 season. Sometimes known as one of Shakespeare’s problem plays – shows that are not explicitly comedies or tragedies – Measure for Measure is a “fascinating exploration of how power can corrupt, with comedic... Read More