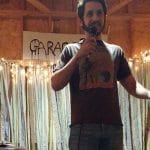 Garage3, at 817 22nd Street in Rock Island, is becoming an ever more popular venue for traveling comedians, as the word spreads of its laid back atmosphere and warm crowds.  Named as being the third garage on the property of Dylan and Tia Parker, Garage3 is normally host to spoken word and poetry readings. Sporadically, however, it is taken over by comedians. Monday, August 22nd was one of these nights. Hosted by local comic Andrew Cline, the Crew Neck Comedy Show is a free comedy showcase of local and traveling acts. A donation basket is passed around for the out of town entertainers, however.... Read More 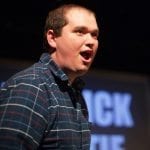 A little of the big apple is coming to a garage in Rock Island tonight. Monday, August 22, Garage3’s Crew Neck Comedy Show will be showcasing comedians from New York City. Patrick Hastie, an Iowa native now living in New York, will be headlining. Featured along with Hastie will be Albert Kirchner and Nick Pupo from New York as well. Local comedians will be Benjamin Graham from Rock Island, as well as Travis Bails and Donny Townsend from Cedar Rapids. Located at 817 22nd Street in the historic Broadway District of Rock Island, sits Garage3, named as being the third garage on the property of #MrRockIsland... Read More 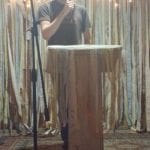 “I kill bugs for my mom. Recently she called me over to kill a daddy longlegs. I don’t mess with any bug that makes the other bugs call it ‘daddy’,” Austin Black said, during the latest Crew Neck Comedy show at Garage 3 in Rock Island. He followed that up with these wise words: “You ever get tickled by someone who has a straight face the entire time?” Regarding his senior prom and being in a dance circle, Black added, “You don’t make eye contact with another guy in a grinding circle. That’s seven years of bad luck.” Comedian Joey Ficken also offered this bit of advice: “One... Read More